Tom Hooper has been a lot of things over his 30-year career: commercial director (Jaguar, Dell), TV helmer (EastEnders, His Dark Materials), Broadway musical adapter (Les Misérables) and Oscar-winning director (The King’s Speech). His latest film, Cats, attempts to draw from each of these silos while adding a new one: world-builder.

Based on the blockbuster Broadway musical of the same name, Cats takes place over the course of a single night, as a tribe called the Jellicles makes what is known as “the Jellicle choice” and decides which cat will ascend to the Heaviside Layer and come back to a new life. Universal is releasing the film against Star Wars: The Rise of Skywalker as its holiday hopeful commercial awards contender. Once again, Hooper gets to play in his beloved sandbox of musical theater, but there was a catch.

The film required a complicated mix of live-action and computer-generated imagery, a first for Hooper. But the veteran is nothing if not adaptable. The director recently sat down with Observer to discuss the making of Cats, his approach as a filmmaker and then some more Cats!

Your professional career began with a series of TV advertisements. Since then, you’ve directed a handful of artfully crafted films that also succeeded at the box office. Did your time in advertising help you develop a sense of balance between art and commerce?
I did my first commercials when I was 19. But I started directing TV drama from the age of 20 or 23. So I always sort of directed adverts and television drama at the same time. I always had my foot in both courts. When I worked on a show like EastEnders, you would go to work in the morning directing something that was going to be seen by 17 million people. So almost one-third of the country.

I remember thinking, “I have to pay attention to what it is that makes this popular in such [a] profound way.” But I think I’ve always been someone who makes work for an audience. I’m not someone who makes it to satisfy myself. I do believe, within modest limits, film can have that capacity to cut through certain stories for certain people at certain moments of their life. They can have a weight or even a transformative path of the people depending on where they are in their journey in their life. I think what the commercials taught me was sort of being concise, because it’s such a short period of time.

In some ways, whatever level of director you are, you still have to bring the studio with you, your producers with you, the talent with you. So learning how to be a good advocate for your own vision was something that that also taught me.

Are your finding that advocating for your own vision is more difficult these days, in which the theatrical marketplace is narrowing in on blockbuster franchises rather than smaller films like your King’s Speech?
That is certainly changing. I still feel like it’s allowing me to tell the stories I want to tell though. I feel supported in that. I still think in today’s market there would be room for a King’s Speech. But I do think the challenge of filmmakers today is to create something where they can look someone in the eye and say, “You need to see this in the cinema.”

The communal experience of watching [the Cats premiere] in that way, it was so fun, with all the laughter and applause. And just the atmosphere in a huge room. You can’t get at home. Even just the sort of film like this, where you’re entering into a kind of magical fantasy, fantastical sort of beautiful world. That sense of being transported somewhere other seems to be better achieved on the big screen.

Cats is a mixture of live-action and computer-generated imagery. How was that accomplished and has it added a new element to your repertoire as a filmmaker?
It’s really more live-action than you realize in the sense that we shot it all live on set. With a couple of exceptions of Trafalgar Square and Piccadilly, where obviously it would be insane to build an oversized version of Piccadilly Circus. We built this world at sort of three times scale, so that humans could be looking at cats’ relation with the world. And my great dream with the visual effects was to find a way to add … To make the actors feline while preserving their faces and their real performances, and the integrity of what they did as actors and singers. To preserve the integrity of their live dance.

So a lot of the complexity actually, of what we were attempting to do, was because we were trying to marry the real with the virtual. Otherwise, ironically if you go entirely CG, in some ways, it would have been easier technically to make. Because you’re not trying to marry those two things. But, of course, it would be a great loss of humanity and personality. But that’s certainly been my first experience of doing something where almost every shot was a visual effects shot. But it’s kind of taken me almost back to the truth that the biggest asset I’ve got is the actor’s face or the dancer’s movement, or the dancer’s body in motion. And my strict direction over the months has been to preserve that more and more.

What do you think these new technological capabilities mean for filmmaking? Is it easier or harder? What does it mean for the future—now that we can create anything we want?
I think what’s interesting is it’s exciting for me, because I’ve created something where I can honestly say no one’s done this before, in terms of visual effects. And this kind of blending of human and animal has literally not been done on this scale before. What’s interesting is how quickly audiences adjust to the new. And I think in the end, the power has to come from the storytelling over the visual effects.

What made me happiest about the premiere is that when people were coming out, they were talking about “Memory” or Gus the Theatre Cat or how funny they found James the Rebel. The first reaction wasn’t around the visual effects. What I felt about the trailer reaction was that the technique had become the story and my main job was to make the technique disappear into the story.

You’ve previously said that directors need to be in touch with unhappiness to figure out when something isn’t working. Is that a feeling you ever had to tap into on this production and, if so, how did you go about rectifying it?
Yeah. Not to sound so depressing… I think what I meant was that you’re sort of … The way I’d describe it maybe more accurately is when I direct, I have the monitor where I’m seeing the shot. And then I have the screen in my brain, where I’ve got what I’d like the shot to be, or the performance to be. The most exciting thing is when I have an actor who comes in and is so much better than the one in my head, that the brain is superseded. And I’m like, “Oh, OK. It’s just this.” But a lot of that is kind of when I still feel the difference, I still feel the pull to the screen in my head. I don’t … One doesn’t rest easy. One’s got that sort drive to align the imagined version of the moment and the moment in front of you.

You’ve also said previously that you are a perfectionist who doesn’t give compliments easily. This is a star-studded cast with veteran actors, international pop stars and really talented performers. How did you manage to oversee so many personalities and egos in a blockbuster production?
I think I’ve got better at complimenting and saying, “Thank you.” I think what I meant in that quote was that if I don’t think an actor has got it right, I find it quite hard to lie. So, I think it’s more that I kind of have… I felt I have to sort of be truthful with actors. If they’re great, then they certainly are going to hear it from me many times. But the plus is that they know I have an honest pair of eyes on them. And, I suppose, I think if you bullshit an actor, then they slightly lose the trust that your complement is meaningful.

When Cats first debuted on Broadway, it was considered this mega musical, and it has often been compared to the rise of the mega budget Hollywood blockbuster. But we’ve seen that big-budget tentpole lane expanding, where Joker and Logan are comic book movies by name, but more of a psychological character study and Neo-Western, respectively. Would you ever have any interest in using a popular IP to subvert what a blockbuster might be?
I think it’s an interesting idea. And in a sense with Cats, because it is such a world famous and beloved brand and musical, I’ve got the freedom to explore dance as a medium in a mainstream movie in a way that if my pitch was “I’m going to make a film where humans are being cats, and they’ve got to dance” wouldn’t work. It would be very hard to raise money against that proposition.

So, in some senses, the aspects of Cats are quite maverick or unexpected, or bonkers even. There’s permission for them, because I’m working within a kind of a solid structure of something. So you’re right.

Counting the subsidiary Focus Features, this is your third film with Universal Pictures. What differentiates them from other studios you’ve worked with?
Certainly you’d have to say that they’ve been very supportive of me being a risk taker. I mean, Les Mis, looking back at it, it may not seem like a risk. But I think doing the singing live was perceived as a risk at the time. And when I said that that’s my … If I’m going to do it, I have to do it this way. It’s how I feel. They were very supportive with that. I mean, Danish Girl again, was not obvious subject matter for a studio to back. And they fully backed on that. And Cats in a sense, of course, there must be risks in putting Cats together. They’ve sort of backed me to be bold. They encouraged me to be bold. So I think they’re a special studio in that respect.

What is one thing your fans would be surprised to learn about you?
Well, I think my fans will be surprised by aspects of Cats, because it shows a part of my imaginative brain, my world creation brain, and my… Maybe my sense of playfulness or irreverence, which perhaps is new to my work. So I think Cats is something that will surprise people. 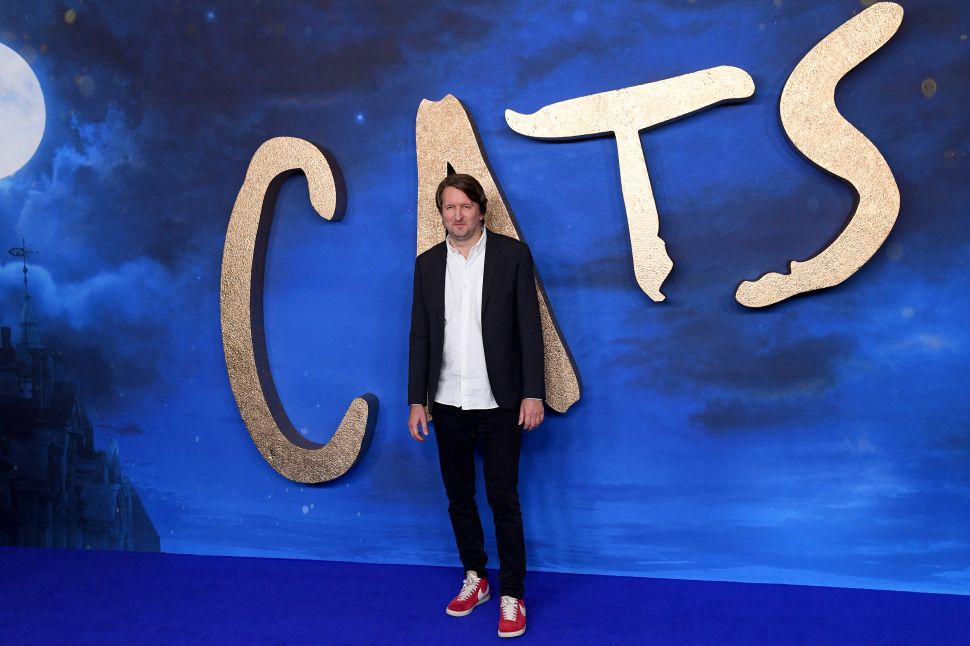