It’s hard to believe that a year ago, we were facing the worst stock market plunge for December since the Great Depression. The market recovered a month later and a recession was warded off, but it begs the question: Are recessions more likely in December, despite all of the holiday shopping? And looking at our economic history, what happens after the holidays are over in January?

The Myth of ‘the Santa Rally’

“December historically is the most wonderful time of the year for stocks,” stated a December 2018 MarketWatch article. “Since 1950, no other month has posted a higher average return than December.”

The article went on to boast: “Stocks kicked off December with gusto, helping investors to usher in the month on a festive note and sparking hopes for a so-called Santa rally.”

The article cited a temporary truce in a trade war with China, Federal Reserve action and the 2018 election results (with Democrats winning only one legislative institution) as reasons for optimism. It quoted an LPL Financial source as saying, “Since 1950, the S&P 500 index has never had its largest monthly drop in December.”

Well, we know how that turned out. Just two weeks later, CNN reported: “The Dow and S&P 500 were each down about 7.8% through Monday. That’s the largest drop for each key market barometer since 1931, according to data from LPL Research.” The economic pain went on. “The Dow and S&P 500 are both in the red for the year, putting stocks on track to have their worst annual loss since the 2008 Great Recession—and first annual loss since 2015.”

What happened? The trade war with China didn’t dissipate. Political tensions led to a lengthy government shutdown a week later over the border wall that continued throughout most of January.

So why did the Santa Claus Rally turn out to be a myth? Remember, a myth is neither true nor false. When you watch Mythbusters, not every myth is busted. Some get the designation of “confirmed” or even “plausible.” Sometimes Indiana Jones and Willie Scott can bounce off or fall through awnings, and survive.

Myths are models that “make sense.” And with all of the money spent on Christmas shopping, it’s natural to believe that stocks wouldn’t go through the roof, or that a country’s GDP wouldn’t post impressive gains. But don’t forget that businesses bank on a big holiday spending spree. Any gift-buying that comes up short, even if it’s a season in the black instead of the red, can provide a shock to the system.

To determine what’s most likely to happen, we need to look back into history to see when recessions generally occur.

What Our Economic History Shows

The National Bureau of Economic Research (NBER) has data on economic recessions going back to 1857. And we’ve previously had recessions during the month of Christmas, as my graph of NBER data reveals. 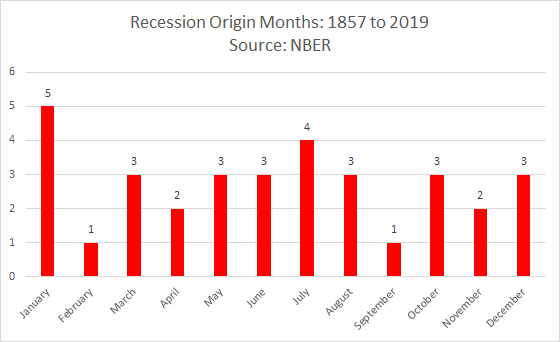 Those recessions occurred in 1895, 1969 and 2007, when Presidents Cleveland, Nixon and Bush Jr. were in charge. Of course, the last one triggered the “Great Recession,” not only one of the worst economic downturns in our nation’s history but also the last one we suffered. It shows that we’re not immune to Grinches stealing our national economic growth.

The most important lesson from this endeavor is to discover when the most recessions do occur. January is that month. Five recessions have occurred then (1893, 1910, 1913, 1920 and 1980). The threat of a holiday hangover may be even stronger than Christmas cheer.

“As you know, the stock market rebounded quickly at Christmas, and that rally has stretched into the start of 2019,” wrote Rob Isbitts for Forbes earlier this year. “But that does not change the fact that December was a test for investors. That bounce to start this year was a giant reprieve for those who realized somewhere between the eggnog and the ‘Happy New Year’ greetings from friends that there was a market rout going on. It was an opportunity to call time-out and re-double your efforts to determine if you are invested properly, now that the bull market in stocks could be kaput. Complacency crushes long-term investment strategies. Don’t let it ruin yours.”

Chief financial officers are equally jittery too, especially after getting burned in December of last year, according to a Fox Business article. “Nearly half of U.S. CFOs—48%—surveyed by Duke University Fuqua School of Business believe the nation’s economy will enter a recession by the end of 2019. That’s on top of an additional 82% who believe that a recession will have begun by the end of 2020. The end is near for the near-decade-long burst of global economic growth,” said John Graham, a finance professor at Duke and overseer of the study. “The U.S. outlook has declined, and moreover the outlook is even worse in many other parts of the world, which will lead to softer demand for U.S. goods.”

Those worries persisted through August of 2019, as the “yield curve,” additional warnings, continued trade war and partisan politics led to market plunges and fears of economic downturns, as reported by Vox.

CNBC isn’t so sure, as the outlet recently reported just last week that “a recession is still ‘pretty far off.'” And MarketWatch thanked millennials and their spending habits for staving off an economic slump.

But it’s important to note that economic success seemed so sure a year ago, then chaos ensued. What we should remember is that just because it’s December, and it is the holiday season, America is not recession proof. Moreover, investors should be wary of bears lurking around the corner in January, if our economic history is any guide. Ride the current bull, but don’t believe that downturns are impossible with Christmas shopping at a high pace. That would be, shall we say, a lot of bull. 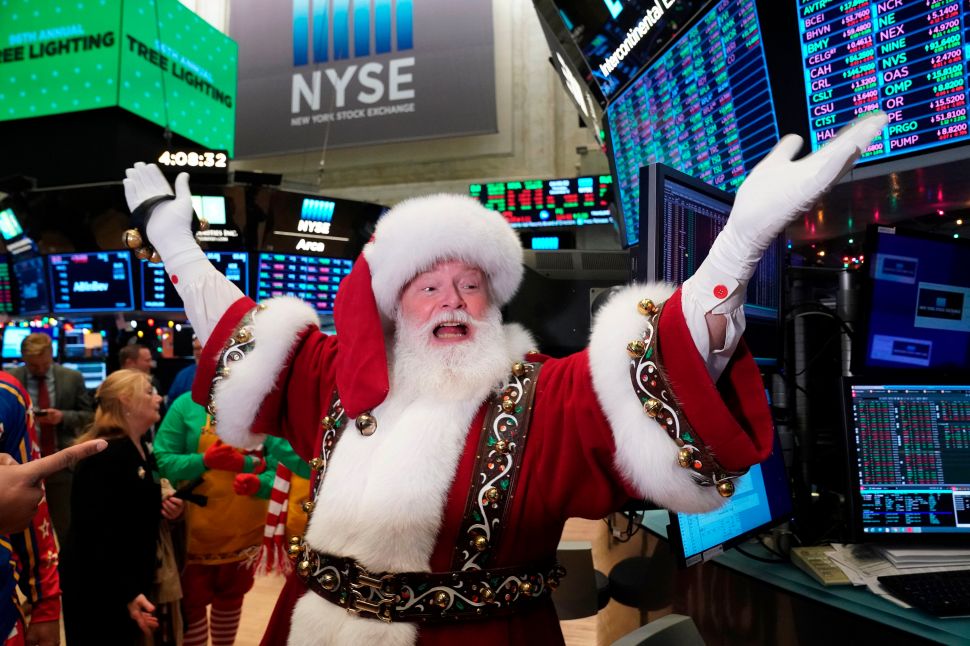