Have you seen National Lampoon’s Christmas Vacation? It’s a great mid-career Chevy Chase movie. (“Yule Crack Up” is the tagline.)

If you venture to Dyker Heights, in southern Brooklyn, during the holiday season, almost every single damn house it lit up with the over-the-top panache of the Griswold family home. The neighborhood is pure abundance of extravagant lighted debauchery.

I imagine Thomas Edison waking up in a mad sweat at the conception of the light bulb, being propelled into present day and having his brain explode at the site of the front yards of Yuletide illumination that looks like Santa Claus just threw up—which is the Dyker Heights annual extravaganza.

To give you an idea that this hi-tech holiday pageantry is’t norm in NYC, here’s a typical Christmas decoration found on my street:

Tourists love it. Do you know who else loves it? Con Edison.

Yes, the holiday lights of Dyker Heights is a pure Con Edison wet dream. Lights don’t pay for themselves. According to the Bowery Boys podcast, some Dyker Heights residents spend between $5,000 to $8,000 just on the monthly electricity costs alone to illuminate their homes which look like a Santa-themed Vegas casino. There is a hell of a lot of wattage going on here—especially when you see trees where every single branch is decked out in lights.

The lazier, and wealthier, residents pay professional decorating companies upwards to $20,000 to adorn their homes with Christmas pageantry, to a level that might even make Santa nauseous. Since 2006, bus tours bring eager tourists to feast their retinas on the neighborhood; it’s estimated that 300,000 people will visit this December.

How did this illuminated spectacle spectacular all begin?

To know the story of Christmas in Dyker Heights, we need the story behind Christmas tech.

Thomas Edison introduced the first outdoor electric Christmas light display during the 1880 Christmas season. This took place outside his laboratory compound in Menlo Park, New Jersey. Then, just a few years later, Edward Johnson, under the supervision of Edison, created the first string of Christmas lights. It was comprised of a string of 80 small electric light bulbs. In 1890, the strings of lights were then mass-produced. (Replacing the previous fire hazard tradition of putting lit candles on Christmas trees.) Department stores then began lighted Christmas displays.

A couple of decades later, electricity became more affordable for middle-class families who had spun off into the suburbs, which created the environment of trying to outdo your neighbor with Christmas lights and decorations—Griswold-style.

The Dyker Heights holiday lights gluttony origin story began in 1986. The catalyst was Lucy Spata, a resident on 84th St. between 11th and 12th Avenues. A self-proclaimed “decoration freak,” she began decorating her home with plastic angels, and each year, she went a little bit more over-the-top. Neighbors started to complain. Some called the police on her. (Bah humbug.)

“If you don’t like it—move,” was her very Brooklyn response.

But eventually Spata wore her neighbors down, and they too began to follow suit. Over the years, the holiday decorating bug spread down the block and soon encompassed a huge portion of the neighborhood. Residents would engage in friendly competition to see who could out-decorate the others—with spinning merry-go-rounds, revolving life-sized toy soldiers and moving giant nutcrackers.

Spata told The New York Post that her electric bill runs under $700 per the month-long season.

“They’re not on steady,” she said. She cuts electric costs by now using LED lights and running the display on a timer. “People want to ­[donate to the cost], but I won’t accept it.”

Not to be all Ebenezer Scrooge, but Christmas lights lead to some recycling issues. Annually, more than 20 million pounds of discarded holiday lights are shipped to Shijiao, China, which is referred to as “the world capital for recycling Christmas.”

The region began importing discarded Christmas lights in 1990, largely to do a cheap labor force and low environmental standards. According to Gizmodo, the lights are ground into gloop, separated into brass, copper and plastic. The remnants are turned into everything from slippers to brand new gadgets.

Some food for illuminated thought the next time you visit Dyker Heights.

Though there is certain kitsch to the spectacle, I enjoy the low-tech brilliance that can be found with the decorations in my Brooklyn neighborhood. 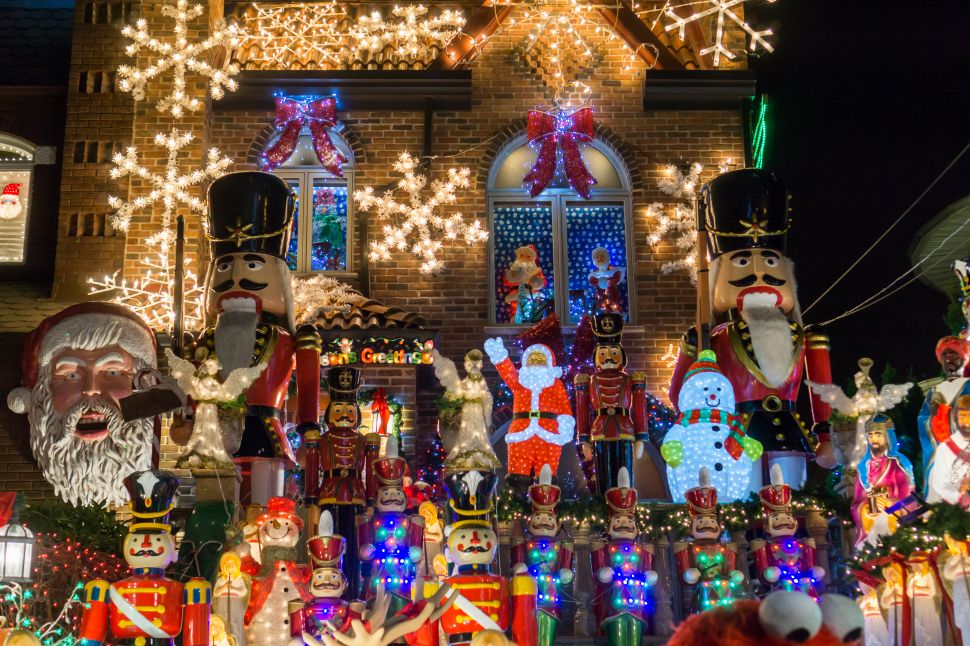