Len Cariou proved his stature and power when he won Broadway’s coveted Tony award for the title role in Stephen Sondheim’s Sweeney Todd. Craig Bierko showed plenty of razzle-dazzle as the star of the Broadway revival of The Music Man. Joining forces they now get a chance to demonstrate a multitude of talents together as father and son, in a two-man play titled Harry Townsend’s Last Stand at New York City Center.

Cariou plays Harry, a crusty and irascible 84-year-old curmudgeon with plaid shirts and country pants from the pages of the Vermont Country Store catalog, and a waistline wide as a truck tire. Bierko plays his estranged son Alan, a divorced 45-year-old real estate broker from San Diego who drops in on his dad at their family cottage in rural Vermont for the first time in 18 years. For more than an hour of their caustic, often very funny bickering and bantering, you think Alan has come for a long overdue catch-up visit. But as they drain two bottles of scotch, it becomes obvious that he has more serious motives in mind. Alan, it turns out, has signed his aging father up for permanent residency in an assisted living facility without his knowledge or permission, and doesn’t know how to tell him.

Fighting both rage and outrage, the old man makes every effort to convince his meddling son he can take care of himself. In fact, there’s his mature married daughter Sarah who lives with her father and is always around in case he needs her. But the fact is, Sarah (who is talked about but never seen) and her husband, a chef who wants to take a restaurant position in another part of the country, need to move away, make a fresh start in a home of their own and start their own family. Alan takes inventory and decides his father’s insistence on independence is a fantasy. The son obsesses over his Jack Daniels intake, while the father lets the bathtub overflow. Harry takes 14 different pills a day, which he forgets unless his daughter lines them up next to his orange juice each morning. The coffee pot is in the oven, the filters are in the freezer, and Harry’s underwear is stacked under the sink. Sometimes he locks himself out of the house and loses the key. The cluttered kitchen counter is crowded with boxes of crackers. “I haven’t had one of those since I cracked a filling 20 years ago,” frowns Alan. “You used to like them,” says his father. “No, I never liked fillings.” These are the jokes.

Written by George Eastman and breezily directed by Karen Carpenter, Harry Townsend’s Last Stand takes a serious subject and dusts it with humor, but by the time Act 2 rolls around, the real plight of senior citizens who refuse to give up when the apple won’t bite is reflected in recognizable situations and poignant performances. The stars are splendid enough to forklift the material above the level of a TV sitcom, and Harry Townsend’s Last Stand is a play about generational differences that makes you smile while you learn something. 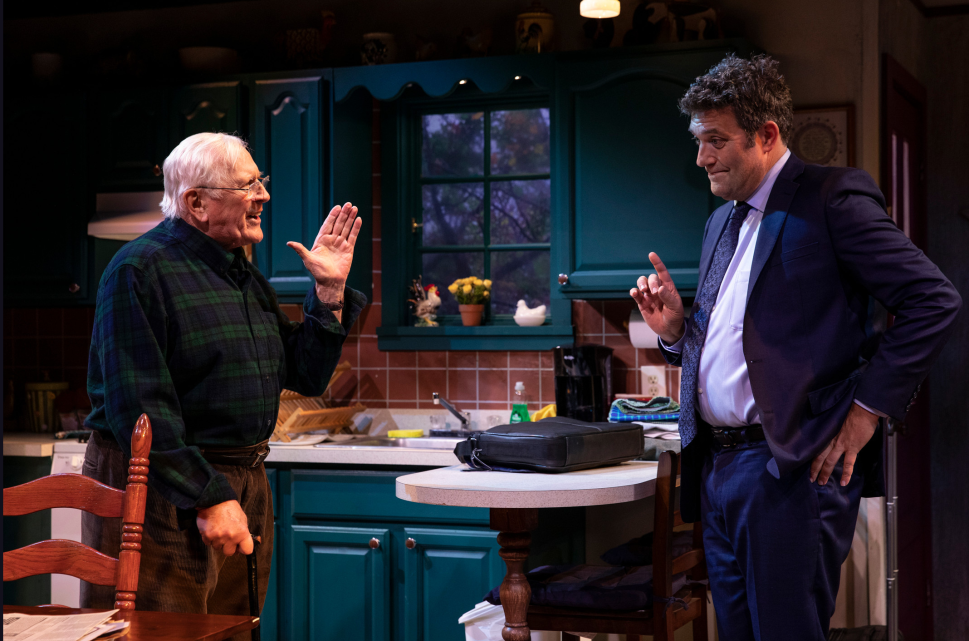