The top brass at Park Avenue Armory—president Rebecca Robertson and artistic director Pierre Audi—want it to be a site for politically resonant performance. Who can blame them? When you’re programming a 55,000 square-foot sprawl with a nosebleed-inducing vaulted ceiling on the Upper East Side, you best not book the tour of Avengers: Endgame—The Live Marvel™ Rock Experience. Your patrons expect epic art that exploits the scale of the building (not to mention its history of wealth and militarism) to comment on a meaty issue.

Finding material that can expand to fit the acreage and still retain artfulness has been elusive. I’ve seen a gaudy, Medieval Faire Macbeth with Kenneth Branagh; a forgettable period piece about the 1997 chess match between Garry Kasparov and computer Deep Blue; and, earlier this year, the overpraised but elegant chronicle of a family financial empire, The Lehmann Trilogy. It wouldn’t surprise me—it would actually intrigue me—if they announced a ginormous staging of Ionesco’s Rhinoceros, with a pack of odd-toed ungulates stomping across the boards. Or an immersive re-creation of the Nuremberg Rally—only with MAGA hats. Or a supersized, sensory-battering Brecht: A Mother Courage to end all Mother Courages.

Instead we get Judgment Day: a fairly obscure German drama about guilt and mob mentality, newly translated by Christopher Shinn (Dying City) and staged with smart, handsome efficiency by veteran English director Richard Jones. Most audiences will be unfamiliar with the Austro-Hungarian author of this morality tale, Ödön von Horváth (1901-38). I’ve seen one other of his works, Don Juan Comes Back from the War, in a college production whose chilly, brittle tone both attracted and unsettled me. Years later, I can place Horváth in a wider context of German pre-war and interwar dramatists such as Frank Wedekind, Carl Sternheim, Brecht and Max Frisch:  unsentimental social critics who mingled gimlet-eyed satire with surreal or grotesque effects. Their Weimar contemporaries are painters like Otto Dix and Georg Grosz, artists who saw decaying flesh, venality, and creeping fascism everywhere they looked.

Horváth wrote Judgment Day during the rise of the Nazis, and clearly intended it as indictment of moral cravenness in the weighing of guilt or innocence. The first (and best) scene takes place at a small-town train station run by the highly respected and diligent Thomas Hudetz (Luke Kirby). Hudetz moves robotically and cleanly, like he’s an extension of the levers he yanks to signal trains to slow down. Actors flatten themselves against the wall when trains roar by, loud whooshing and clattering accompanied by streaking lights. It’s all very German Expressionist. One day, the stationmaster is visited by Anna (Susannah Perkins), the flirty daughter of the local innkeeper and, while Hudetz’s miserable, estranged wife watches, Anna steals a kiss. In a moment of distraction, Hudetz allows the 405 express to zip by without warning it about the delayed passenger train ahead. Tragedy crashes down on their heads.

As crew members position set designer Paul Steinberg’s massive, rolling set pieces—two-story tall, plywood-covered architectural units that form a covered bridge and the large train station, Jones orchestrates the 16-member cast with kinetic grace. Villagers race to the scene of the accident, making long arcs across the Wade Thompson Drill Hall’s plentiful yards, dashing underneath the arch as it glides into place. The imagery is stark, monumental, and very German: black silhouettes of trees glisten on the periphery of the space, an alpine chorus to silently bear witness. Lighting designer Mimi Jordan Sherin’s chilly shadows and Daniel Kluger’s ghostly sound designs contribute to the overall morbid, tense atmosphere of repression and dread, where there’s hardly a fully dimensional or sympathetic figure (except perhaps for Henry Stram’s kindly but ineffectual chemist).

In the inquiry that follows the horrific crash that kills 18, Hudetz is accused by his wife, but cleared by Anna’s false testimony. A vindicated Hudetz returns to the village, his spotless record a comfort to the callow townsfolk. It’s the stationmaster’s bitter, shunned wife, she who accused him, who is now the pariah. As the story continues, Hudetz meets secretly with the guilt-ridden Anna, who loves him, and her mysterious death soon afterward is attributed to him. The fickleness of the crowd, epitomized by the superficially friendly but misanthropic gossip Frau Liemgruber (delectable Harriet Harris) turns Hudetz into a hunted, haunted wretch.

The cast is solid; Jones’s direction is clean and forceful; the design is impressive and engaging; and Horváth’s cautionary message comes through clearly in Shinn’s lean script. But Judgment Day is, finally, a small play in an oversize production that dilutes any ripple effect the fable might have in 2019. One could imagine it being just as effective at Classic Stage Company or the BAM Harvey without the pretentious gigantism that is the unfortunate byproduct of Armory presentations. If you sprechen sie Deutsch, you can watch a 1961 TV movie version on YouTube. I applaud producers dusting off neglected European and American classics. But a deluxe museum treatment (more embalming than revival) at a steep ticket price isn’t going to increase Horváth’s stock. Much as I respect his work, that train has left the station. 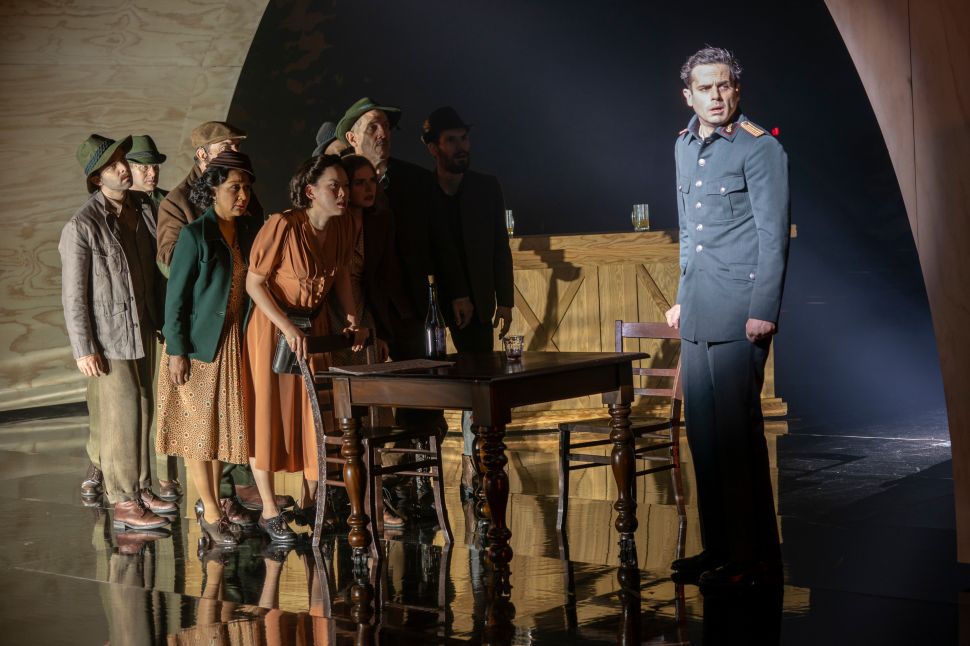