Kent Monkman is having a big year. A very big year.

The Canadian multimedia artist, who is of Cree First Nations heritage, is still crisscrossing North America with his touring show of paintings, “Shame and Prejudice,” a journey which will continue well into 2020, and his new works are appearing in group shows from Duke University to Des Moines. But his next project catapults Monkman into monument-maker status: think Picasso’s Guernica monumental, or Tate Turbine Hall scale.

On December 19, the Metropolitan Museum of Modern Art will unveil mistikôsiwak (Wooden Boat People), a massive diptych (both 22 feet long) that will fill the Met’s Great Hall. Details are limited until the reveal, but Monkman’s harrowing visions of the state-sanctioned cultural genocide on which everything now occupying this continent was built, including the Met, is sure to alarm and educate. Gasps will echo across Manhattan.

“There’s certainly an adjustment process to working on that scale. Four years ago, I was doing all the drawings and the studies, but over the last three years I’ve been using photo shoots and using digital photography as a tool for my painters [assistants]. I’ve changed my studio practices a lot to accommodate that scale, to make more work but also better work. I don’t want to do it all by myself anymore. It’s physically limiting.”

Miss Chief sometimes appears in person (via Monkman himself) and/or pops up in his paintings as a divine, animating or angered sylph (in stilettos). As Monkman himself once put it, Miss Chief is a “time traveling, gender fluid, Indigenous sex goddess” whose very presence disrupts the traditional (read white, read European), sanitized version of colonial history.

Monkman is mum on whether or not Miss Chief is in the works about to be unveiled, but her actual presence is less important than what her spiritual presence (and thus Monkman’s too) has come to represent: the decolonizing gaze, righteous anger and long memory of the Indigenous Renaissance.

“Miss Chief reverses the gaze. She’s an indigenous mythical being that exists as counterpoint to how indigenous people have been portrayed in colonial art. Miss Chief is a witness. She functions as a way to situate indigenous perspectives on an art history that has erased us or misrepresented us. She explodes all of that, by being a part of Cree cosmology, anchored in a Cree perspective, and being very sexual.”

Monkman paints with an urgency unusual for an artist in his 50s. His panoramas depicting indigenous people fighting and surviving colonialism combine the stark, chaotic energy of photo journalism with classical tableaux compositions and plenty of Western painterly allusions. The results prompt both shock and upset after, curiously, first offering comfort.

To wit, a Western viewer immediately recognizes the figurative traditions within which Monkman paints but does not recognize, or does not want to recognize, the hidden, shushed-away history and ongoing present day horrors Monkman so meticulously stages on canvas. This seductive pivoting is key to understanding how Monkman’s practice exists in multiple worlds.

“Western art threw out painting at its zenith, in the 19th century. This grand tradition of making pictures was discarded, but I see it as a way to tell stories. Relating indigenous experience through this very complicated language of image making has so much value. The Old Masters were so good at describing human emotion as it plays out on the body, in the face. It is and can be again a relevant language.”

Monkman has been an art star in Canada and Europe for years now, but the Met commission is still a huge leap in his career. It would be for anybody. Monkman is taking it in stride.

“I’m not nervous about the unveiling, I haven’t had time to be. It’s been less than a year since the commission and completion. I was still gessoing canvas in July! This is obviously a big step in my career, and I feel fortunate. At the same time, the commission came along just at the right time in my work. My team and I are ready, and we’re not afraid.” 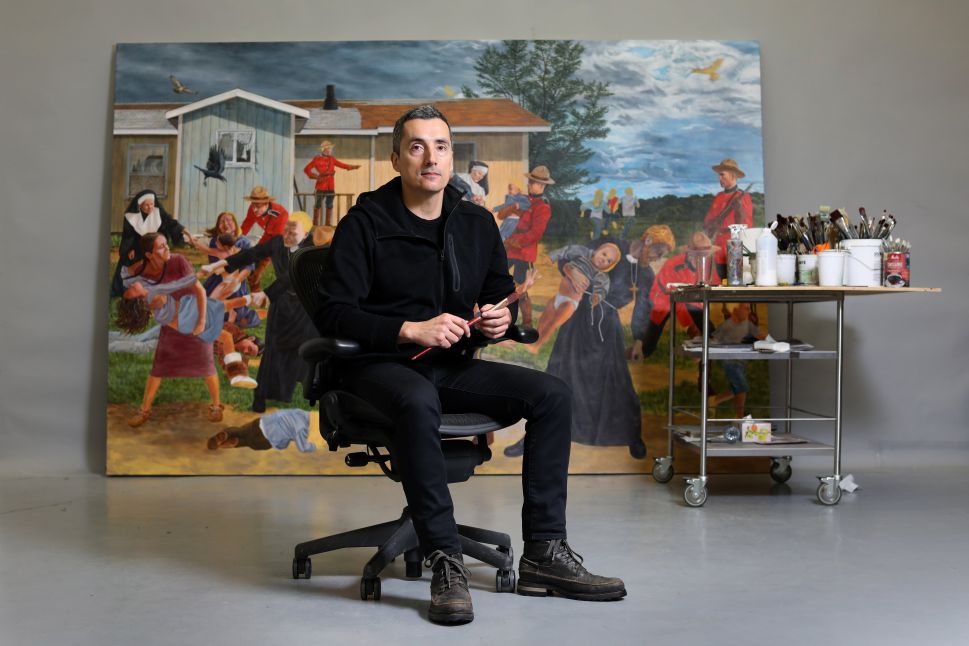