Hollywood is awash in filmmakers whose work exists on the poles of the emotional spectrum. The populist success of Steven Spielberg prior to Schindler’s List was docked in the minds of some upturned-nosed critics who refused to attach any significance to sentiment. Conversely, Christopher Nolan has been unable to break free of the perception that he values form over function as a cold and detached storyteller. Our current cinematic chapter is seemingly defined by singular gifts or weaknesses, an era of either/or. But Greta Gerwig’s Little Women, the seventh screen adaptation of Louisa May Alcott’s beloved novel, is an emotionally stirring creation that never falls prey to manipulation. It is alternately doused in sentimentality and removed from standard delivery, culminating in a hilarious and emotional tale bustling with chaotic charm.

Gerwig, cementing herself as one of Hollywood’s most exciting filmmakers following her breakout directorial debut with 2017’s Lady Bird, proves to have excellent instincts as a storyteller. The young director made the controversial choice not to tell the story from beginning to end, but rather to unfurl it in a non-linear fashion, hopping back and forth between timelines that showcase the life of the March family in the aftermath of the Civil War. The idea was borne out of Gerwig’s deep research into Alcott.

“These sorts of seeds of her as an author and a person started to grow and what I wanted to do was collapse the space between Louisa and Jo,” Gerwig said at the TimesTalks Q&A held at the DGA Theater in New York on Monday night. “I wanted to ground it [with them] as adults and then go back in time. It’s this sort of iconography of Little Women, the girlhood part. I wanted to have it be something where they were yearning for something that was gone. I feel like as a grown woman I’m always sort of walking with my younger self and answering to her. I felt the same was true of the March sisters.”

The story, already a classic, enjoys a fresh retelling that sees the adult versions of these lively characters look back on their childhoods with greater empathy and understanding as a result. The unique structure also enables Gerwig to better juggle the many themes that freely jostle around Little Women like loose change in your pocket. Radiating a hopeful optimism, even in the face of tragedy, the film seamlessly pivots from idea to idea—personal contentment, economic hardship, the expectations attached to gender by a provincial society. Little Women packs in both universality and specificity without sacrificing one for the other.

The belief in the layered text as a wellspring for creativity was echoed by star Saoirse Ronan (Jo March), who found a commonality between the story and the experience of translating it to the screen.

“What I noticed…is that so much of it is about kindness between men and women. The gift of kindness, goodness, patience and support for one another. And that’s something that we all experience as co-workers on this,” Ronan said. Later, she added that “the story of Little Women as well as the experience of making the movie was one of mutual support between all of us. That’s an incredible gift to be given.”

Audiences will immediately be overtaken by the lushness of the film. Costume designer Jacqueline Durran, cinematographer Yorick Le Saux and composer Alexandre Desplat combine with Gerwig to treat viewers to a sweet and varied palate of colors, shots and sounds. That they all overlap and crash into one another with the sprightly entropy of youth is intentional. It provides the foundational vibe of the film and the feeling pervades each of the strong performances, especially standout turns from Timothée Chalamet (Laurie) and Florence Pugh (Amy March).

“Greta was very clear in the rehearsals that she wanted it to be chaotic, people falling over each other, the girls feeling like young people with youthful abandon,” Chalamet explained. “We don’t see that anymore because of Instagram and shit like that where people are so self-aware and everyone is a little professional and a young brand. It’s so nice to see in this movie, young people—girls, boys—being young. Greta really got at the earnestness and the sincerity—it breaks through the cynicism and self-serious shit we see all the time.”

Little Women is brimming with life and love for its characters and original creator. It’s a celebration of art and passion and the making of art purely for the passion of it. It sits, balanced and steady, at the intersection of sentiment and substance. If ever a more perfect Christmas Day movie for the entire extended family existed, we have yet to find it. 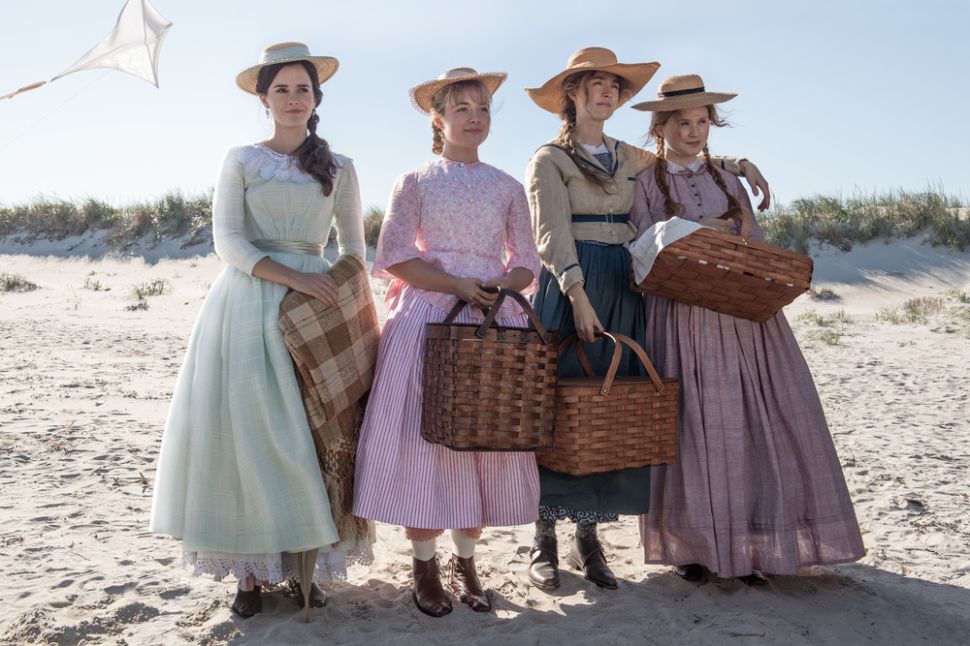