Miami Art Week is defined by its sprawling extremity; the extent to which it’s nearly impossible to see everything that you want to see and talk to everyone who you want to talk to within just a couple of days. At Art Basel Miami Beach in particular, the fair’s seemingly infinite list of galleries communicates to attendees that they’ll have to be laser-focused if they want to use their time wisely. This year, gesturing towards a potential antidote to the million-booths problem, the fair announced the addition of a new sector dedicated to sculptures, paintings, site-specific installations, videos and live performances rendered on the grandest scale possible: Meridians.

In the simplest terms, almost every piece on display in Meridians is absolutely massive, which is a state of being befitting the sector’s location: the exhibition is being held in the Miami Beach Convention Center’s new Grand Ballroom, which boasts 60,374 square feet of space. Meridians was curated by Magalí Arriola, the newly-appointed director of Museo Tamayo in Mexico City, and the group of artists included in the sector are thrillingly diverse and interestingly organized.

A black and white film by Ana Mendieta is screening in close proximity to The Garden by Portia Munson, an installation that takes the form of a chintzy woman’s bedroom packed with fake flowers, lurid fabrics and eerily watchful stuffed animals. All the way across the huge ballroom, Manish Nai’s huge, multifaceted sculpture 95 Natural Indigo Sticks rests comfortably against a white blank wall, and if we’re not mistaken, each stick emits a not-unpleasant but immediately detectable aroma.

Other artists represented in Meridians include Barthélémy Toguo, whose sprawling watercolor piece Dynastie he originally made for the 2012 Biennale Benin, and Laure Prouvost, the French conceptual artist who startled onlookers at a New Museum dinner last year with an alarming anecdote about her grandmother. Prouvost’s installation, DEEP TRAVELS Ink, is set up to look like a semi-operational Miami travel agency that attendees can explore themselves. An assistant hands you a small mirror attached to a long handle, which you then can use to search for hidden messages written on the underside of the tables and chairs in the installation.

Overall, the huge scale of Meridians provided a welcome respite from the closely packed main convention floor, but the sector’s commitment to bigness as a central theme ultimately fell a bit flat. As a viewer, it’s sometimes hard to develop an emotional connection to artwork the size of a school bus. 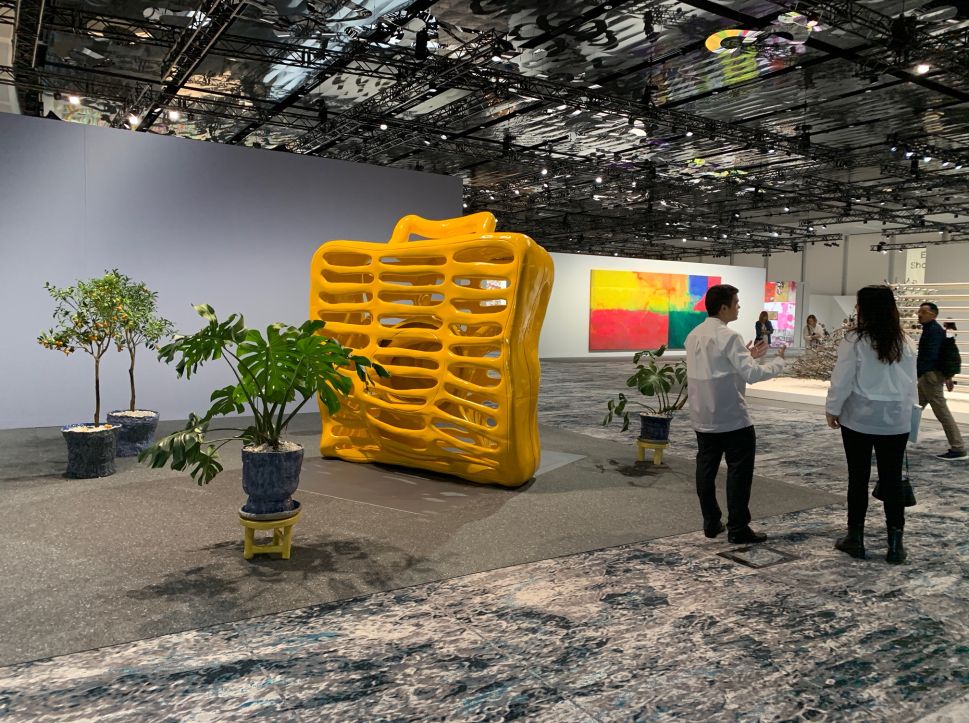