For someone who’s made a career of being an opera queen, I’ve always had a bit of a blind spot for one of the classic gay/camp opera favorites, Richard Strauss’s Der Rosenkavalier.

A big part of that antipathy, frankly, has been that the Metropolitan Opera has not served the piece well over the three decades I’ve been in New York. Revivals of the piece have been variously hobbled by the presence of conductor James Levine (loud, cold orchestra playing), soprano Renée Fleming (gauche and self-pitying in the central role of the Marschallin) and a tatty Nathaniel Merrill “staging” whose premiere predated the first manned moon landing.

In fact, I had to go as far as Stuttgart to find a satisfyingly thoughtful take on this curious work, part sex farce, part midlife crisis dramedy, part meta-pondering on the transition between the Romantic and Modern eras. But I am overjoyed to say that on Friday night, the Met finally opened my eyes to the charm and power of Rosenkavalier in a revival that delivers intellectual rigor and emotional wallop in equally overwhelming measures.

The chief architect of this triumph is Simon Rattle, who demonstrates here the difference between conducting an opera and leading an opera: every element of the performance (even the visual ones) seemed to harmonize with his brilliantly energetic take on the score. In this tale of intergenerational romance (a 17-year-old nobleman in an affair with a princess in her 30s), Rattle’s kinetic and kaleidoscopic use of the score clearly suggested the triumph of youth at the end of the day.

It’s not that Rattle’s tempos were hectic, but rather that he maintained propulsion even through slower, more reflective sections of the score. The 75 minutes of the complicated first act seemed to fly by, and even the later, musically uneven final acts maintained firmly arched structures. The highest praise I can give this interpretation is that at no time in the nearly four-and-a-half-hour performance did I ever think, “get on with it.”

Rattle’s musicality synched satisfyingly with Robert Carsen’s witty production, even more precise and meaningful now than it was at its premiere two seasons ago. The staging accomplishes the astonishing task of taking a classic that premiered in 1911 and transforming it into a mirror for our own time. Rosenkavalier has always been in part a satire on toxic masculinity (the boorish Baron Ochs treats his young fiancée like a chattel), but Carsen expands that criticism to the behavior of the nominal hero of the piece, the young Octavian.

The last 20 minutes of the first act of the opera are essentially a series of attempts by the aging Marschallin to talk about her feelings, and in most stagings, Octavian just stands there like a lump as the soprano holds forth. But Carsen has the young man caressing and then frankly pawing his lover, distracted by his own desires. And so the sequence plays as doubly poignant: not only is the Marschallin breaking her heart, but she is also going unheard.

The critique of male privilege even carries over to the last act, when Octavian dresses in drag to prank the misogynistic Baron. Instead of parodying a simpering virgin, as in most productions, here Octavian plays an almost terrifying level of sexual aggression. He’s as handsy and unheeding with the Baron as he was earlier with the Marschallin.

Central to this interpretation is bass Günther Groissböck’s innovative take on the Baron, not the usual blustering roué but instead a sexy beast in the very prime of life. Here the Baron’s gross nonstop groping and leering is not purely comical because (for once) it carries a strong charge of danger. You can imagine his nasty come-ons would actually work now and then! (He even made one of his silliest moments look sexy: a leaping slide across a satin duvet to corner a chambermaid on the other side of the Marschallin’s studio apartment-sized bed.)

My memory is that Groissböck’s voice rang out a little more fully when he sang this role here in 2017; it’s still a big, virile sound but the freak low notes in the part seem at this point to be outside his best range.

Still, he overshadowed slightly the three leading ladies of the opera. Magdalena Kožená brought fresh tone and nonstop dramatic energy to the travesty role of Octavian, though the voice sounded almost all the time just a little recessive behind the massive Strauss orchestra. Golda Schultz’s lyric soprano shimmered handsomely as the ingenue Sophie and she caressed the high-lying floated phrases of the “Presentation of the Rose” with unfussy charm.

A more interesting artist was debuting soprano Camilla Nylund in the complex role of the Marschallin. Fortuitously she both looks and sounds like the character’s description: a beautiful and intelligent woman in midlife. After more than two decades of an active career, her pearly soprano understandably shows minor signs of wear. She was at her peak in the intimate, reflective monologues toward the end of the first act, her slightly cool timbre suggesting patrician restraint even at a moment of emotional breakthrough.

A handful of other debuts also tantalized, in particular, Markus Eiche, a powerful and assertive baritone as Sophie’s hectoring father Faninal, and Alexandra LoBianco, rock-solid in the wild leaps and swoops assigned to the fluttery duenna Marianne.

The late soprano Leonie Rysanek, a celebrated interpreter of the Marschallin, once described the ideal performing style for this curiously moving comedy: “One eye is wet and the other eye is dry.” That complex affect exactly describes my reaction to this Rosenkavalier: bittersweet nostalgia for the past overlaid with glowing optimism for the future of the company that presented it, the Metropolitan Opera. 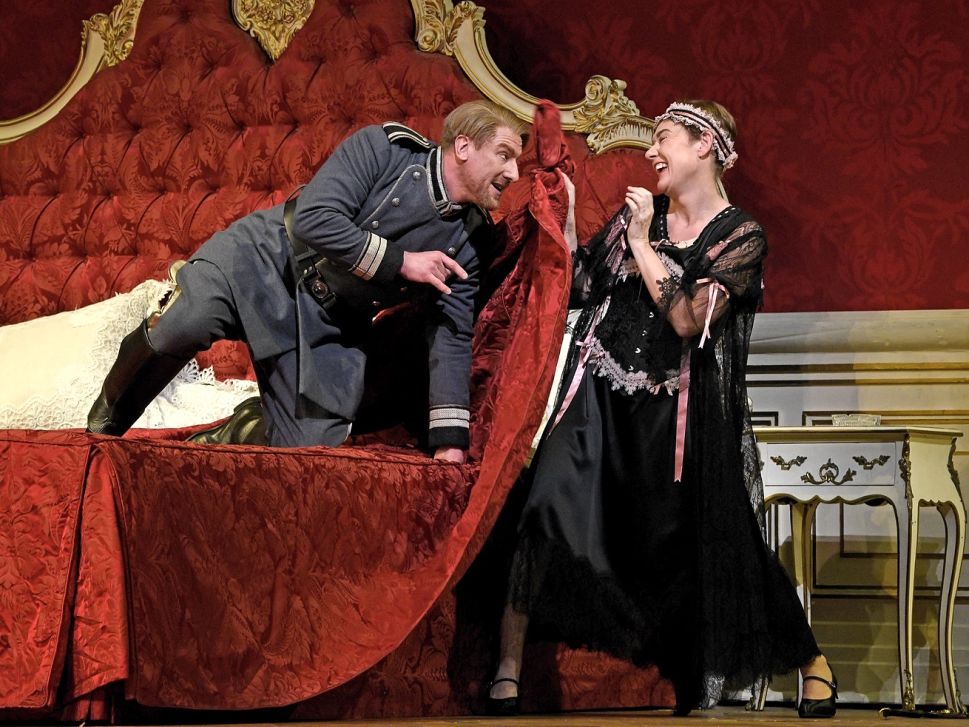