Over the past weekend, art world professionals and rabid collectors descended upon Miami Beach for the famous annual Art Basel fair, as well as for all the elaborate corresponding sculpture-focused sectors, nightlife events and scintillating panel discussions that make up Miami Art Week overall. However, perhaps the most nationally talked-about facet of this year’s event was Maurizio Cattelan’s banana sculpture, Comedian, editions of which sold to collectors for $120,000 apiece. And Cattelan’s sculpture has resonated beyond the blue chip art world: on the following Wednesday, December 11, janitorial workers in the money-saturated city marched downtown with bananas taped to their shirts in order to highlight the objectionable difference between astronomical art prices and sparse janitorial wages, which for workers in Miami amounts to a median wage of $8.50 an hour.

The vast difference in income between janitors and the occupants of newly-completed, glittering high-rises is particularly stark in Miami, according to a report published in November that was commissioned by the Service Employees International Union (SEIU) and completed by UCLA’s Center for Neighborhood Knowledge. The report shows that almost 60 percent of subcontracted janitors in Miami live at or below the poverty line, and that nearly 90 percent of large office buildings in South Florida outsource their cleaning gigs to the subcontractors who perpetuate low wages and job insecurity in the first place.

Many unionized cleaning workers in Miami are represented by 32BJ SEIU, which has been working on an extended effort to broaden rights for janitors and increase awareness of poor conditions throughout the industry. In Florida, the difference between the glamorous celebrity and developer playground that’s telegraphed in the media and the realities for local workers is particularly harrowing. “We have workers who are literally skipping meals,” Ana Tinsly, a spokesperson for 32BJ SEIU, told Observer on Thursday. “We have one janitor who has a bunch of rescue dogs and she has a disabled son, and she sometimes has to skip a meal to feed her dogs and also her son. The campaign itself is a very large and ongoing campaign, there are a number of large cleaning contractors in Florida and we’re helping janitors who number close to 40,000 in South Florida who work in different commercial spaces.”

One of the starkest realities of an event like Art Basel is the awareness that a boundless amount of physical and relatively invisible labor goes into maintaining a space as vast as the Miami Beach Convention Center, which hosted innumerable galleries and spectators over the course of last weekend.

“What we’re saying is that Miami is not just a place for the billionaire who can swoop in, party at Art Basel, and spend hundreds of thousands on an art piece, while the janitor that cleans a luxury office tower that’s part of his investment portfolio earns $8.46 an hour,” added Helene O’Brien, Florida Director for 32BJ SEIU. “It’s the height of absurdity.” When it comes to treating cleaning workers fairly, the art world has just as much responsibility to do so as any other industry. 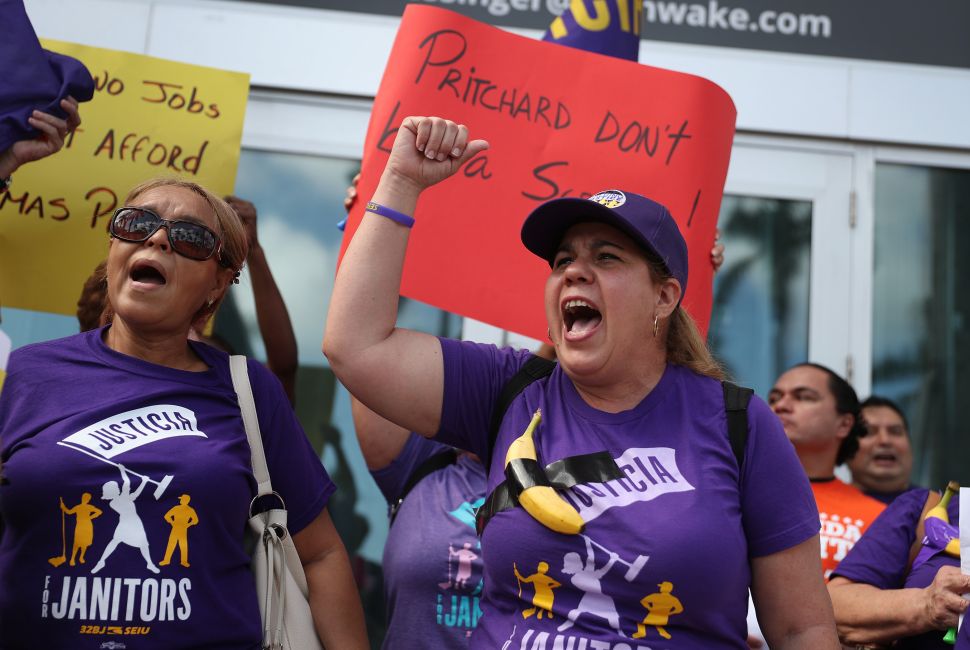