The undergarment industry has been undergoing a major revolution in recent years, thanks to millennials’ dedication to disrupting any and all categories. Now that e-commerce has established itself as a retail mainstay, Generation Z is ready to take over consumers’ intimates drawer.

Enter: Parade. Yes, as in parading in your underwear à la Tom Cruise in Risky Business. Launched this fall, the direct-to-consumer brand offers “soft, sustainable fabric for sizes XS to 3X” with a dedication to sustainability. Headed by 22-year-old co-founders Cami Tellez and Jack DeFuria, the two met on the New York City startup scene during college and didn’t waste any time starting their own company. Having recently raised a $3 million seed round led by Lerer Hippeau, Greycroft and Cassius, along with other investors including the founders of Casper and Away’s Jen Rubio and Steph Korey, they’re set to chip away at the market.

Parade has already been making a splash with the young, hip set, thanks to a clever marketing strategy and word of mouth. It also doesn’t hurt to have your brand arrive amid the rapid decline of old school retailers, including Victoria’s Secret, which once dominated the women’s undergarment industry. Observer recently spoke to Tellez and DeFuria about being young founders, opting for the popular direct-to-consumer business model and, well, underwear, of course.

Starting a company isn’t easy, but being a young founder is one of tech’s favorite narratives. Tell us about your ~origin story~ and how you came to found an e-commerce startup for and by young consumers. Were you inspired by the DTC movement that brought us Glossier, Warby Parker, etc.? Jesse Eisenberg in The Social Network?

Cami Tellez: Jack and I really believe that brands are powerful because they write cultural scripts––I grew up going to the mall, going to Victoria’s Secret, trying on those “add-two-cups bras.” The days of that cultural script have come to an end––and now, the whole category is in crisis. We felt that underwear had this massive untapped potential, and it was time for a new brand to come and rewrite the American underwear story.

Jack DeFuria: Beyond our deep belief in this category, Cami and I are both 22 and we grew up in the midst of the DTC revolution. We understood that e-commerce was about to undergo a seismic shift––no one had built brands for our generation, but we were coming into spending power. Warby Parker, Casper and Away were built in a different landscape for a different customer. Now, we believe that the arbitrage isn’t in social media ads, it’s about creatively finding her where she is. For Parade, that means community, text and digital experiences. 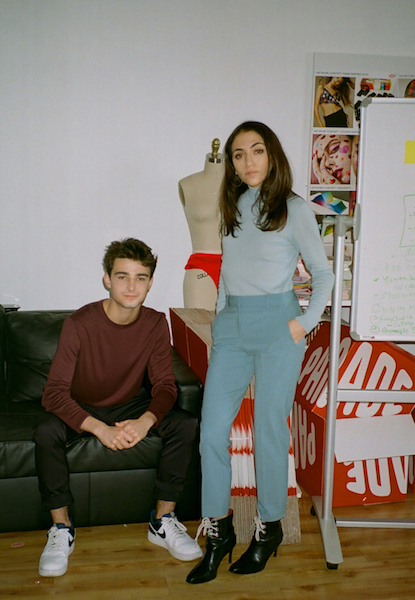 As Gen Z-ers, you represent the next generation of entrepreneurs taking on big corporations to disrupt industries, in your case undergarments. Do you feel there’s an expectation to succeed in the category and become the next billion-dollar valued company (no pressure!)?

CT: Absolutely. We have ambitions to be the next big underwear company—in the future, we believe Parade will be the go-to underwear brand for all women. Ultimately, I want all the people who grew up going to the mall and seeing supermodels blown up on storefronts to come of age in a new world: one where underwear is viewed as self-expression. We’re expanding our product line in the coming weeks, months and years so that we can continue to tell a story of dynamic design and expressive basics for everyone.

JD: We believe that there’s a massive instability in the underwear category—close to 35% of this market is up for grabs. What’s different about Parade is that we focus on finding her first when she’s starting to buy underwear, and she keeps coming back for the next 10 years because we build an incredible experience from her first touch point to each wear.

Parade’s branding is very of-the-moment, but also is reminiscent of American Apparel’s heyday of using a stripped-back aesthetic and more diverse models, which appears to be where the tide is going. Building an inclusive, value-driven brand is one of your goals, but was the strategy to ditch the saturated “Instagram look” intentional?

CT: Jack and I started Parade knowing that the aesthetic of Generation 1 of digitally native vertical brands (DNVB) was no longer relevant or interesting. We had to build every aspect of the brand in-house in order to shift the visual language of the category. Parade’s full-spectrum brand world ladders back to my core belief that women are dynamic, creative and expressive people.

JD: At Parade, we are always thinking about fun—we believe that fun is an underutilized emotion in consumer brands. We’re always looking to engineer more wonder in our brand continuum. From the inception, we’ve set out to do everything differently and reinvent how digital brands look, feel, sound, act and play.

Parade had a very specific pre-launch strategy, which included building hype by literally giving away free underwear via friends’ referrals and text message chains. Tell us a bit about this choice to market the brand, as opposed to a more traditional social media and press rollout.

JD: There’s no guarantee when you launch a brand that anyone is going to show up. Nine months ago, we started building digital experiences—rooms on the internet where we could begin to tell the Parade story and she could bring her friends along. We launched to a waitlist of 70,000 people on October 21, and the response proved to us that people are ready for a new underwear brand, one that celebrates who they are today.

CT: We really believed that to revolutionize a category as emotional as underwear, it had to be a grassroots movement. We launched with no PR and relied on our community of over 400 college reps and micro-influencers to tell the world about Parade. They helped us co-create the fabric and serve as feedback and inspiration for where we’re going next, if we want to stay at the vanguard of the category. It’s easy to build a brand that’s relevant for two or three years, but to make Parade a brand that’s culturally important for 10 years, we know it begins and ends with listening to our community.