Just when I thought one of the worst movie years in memory was down for the count, Clint Eastwood arrived at the last minute with Richard Jewell, to show us all how great movies are made. Yes, this is a great one, and a magnificent centerpiece performance by an unknown actor named Paul Walter Hauser in the title role is a major reason it is so unforgettable.

SEE ALSO: Despite Riveting Performances, ‘Bombshell’ Goes Out of Its Way Not to Anger Fox News

With a painstakingly well-researched screenplay by Billy Ray that honors Eastwood’s customarily meticulous direction, this is the story of the infamous bombing in Atlanta’s Centennial Olympic Park during the 1996 Summer Olympics that first deified an odd, overweight, slow-witted security guard named Richard Jewell, making him a national hero for discovering and reporting the bomb and saving the lives of countless spectators—then, in a heinous and heartbreaking change of opinion fanned by a greedy, irresponsible press and fueled by a corrupt political system and false reports by the FBI, destroyed an innocent man by wrongly accusing him of terrorism.

A few critics have dismissed Richard Jewell as the work of a biased, right-wing director using a low-ranking advocate of law and order like Jewell as an example of how a naive man can be victimized by the liberal American press and the FBI. They are wrong. Everything in this movie actually happened exactly the way it is depicted. Eastwood has simply collated the conflicting facts in a controversial case with his usual polish and timing, creating hair-raising tension and suspense to tell a vital story about a miscarriage of justice.

Struggling all his life to become somebody important, Jewell never wanted to be anything but a cop, and when he finally became an accidental hero while his devoted, sympathetic mother (Kathy Bates in an emotionally draining performance) beamed with pride, part of his dream came true. Then, an ambitious, unscrupulous reporter (Olivia Wilde) and an undisciplined FBI agent (Jon Hamm, in his best performance since the Mad Men series) made news of their own pedaling the theory that Jewell was not a hero but a prime suspect, turning him into an accidental public pariah.

The film turns over every rock in Jewell’s past to support the image they created. He was fired from every job, he invented one lie after another claiming to be a law enforcement officer, and he collected a personal arsenal of weapons. At last following advice and hiring his own lawyer, Watson Bryant (marvelously frustrated but undeterred Sam Rockwell), Jewell still talked too much and refused to do anything his defense team asked him to do, inspiring the press to label him “Bubba Bomber.”

It is impossible to describe the lengths to which Hauser goes to reveal, moment by moment, the mixture of admirable honesty and reckless stupidity that turns a basic Southern redneck into a three-dimensional human being. The only time I recall seeing his work was in I, Tonya, when he memorably played the doofus friend of Tonya Harding who came up with the scheme of wrecking her career with the ice skates. But nothing prepared me for what he accomplishes here. You can’t help but like him. He’s real flesh and blood, obesity and all.

In a coda six years later, the real Olympics bomber confessed and Jewell was exonerated, but it was too late.  Stress had taken its toll, and the hero-turned-victim died in 2007. This is the story Eastwood tells with such responsible sobriety in one of the best films of 2019. 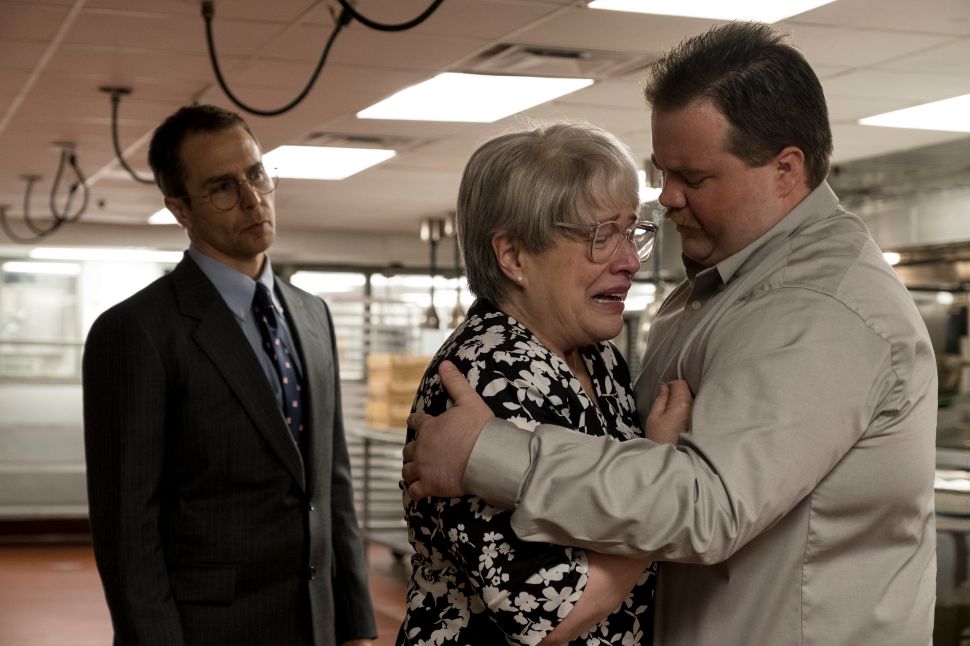