Writer-director John Carney’s coming-of-age movie about 1980s Dublin kids rocking their way to personal liberation came out in 2016 and less than four years later, it’s an Off Broadway musical. That must be a new land speed record for adapting a property from screen to stage. Based on the muted and disappointing Sing Street at New York Theatre Workshop, however, the creative team should have taken longer, failed more, and learned from their mistakes. Most of what’s fresh and appealing in the film (which is cheerfully formulaic) has been lost in a leaden theatrical frame that saps milieu, character and music-making of any tension or charm.

In depicting a motley group of pimply Irish outcasts forming a band, practicing their songs in bedrooms and garages and then building up to the Big Show, film has considerable advantages. First, you can cast actual teenagers in all their awkward glory, not a bunch of actors who are slightly too old and too polished to be fully convincing. Film also captures period and class more efficiently than Enda Walsh’s glib, unfocused book does. In the original movie, family financial woes force middle-class Conor to transfer from posh private school to a squalid, working-class institution run by the Christian Brothers. The fights and bullying there—by students as much as abusive priests—lends Conor’s predicament a brutal, classist edge. But Walsh and director Rebecca Taichman shy away from the lurid and gritty possibilities, with the result that Conor’s new situation is merely inconvenient, not nightmarish.

The plot really kicks into gear when Conor (Brenock O’Connor) spies the beautiful young Raphina (Zara Devlin), standing on a corner in sunglasses looking impossibly cool. Immediately smitten, he does what any red-blooded boy would in 1982: He tells her his band is shooting a music video and would she like to be in it? Of course, he must now hustle to form a band. Again, the process of recruiting amateur musicians was quirky and winning in the movie; here, it’s mechanical, with Walsh failing to individuate band members beyond lazy tics: one has a moustache, another wants a moustache, a third wants to look like a parrot. In comparison, the guitar-shredding tots in School of Rock were practically Chekhovian. Conor’s burned-out, agoraphobic brother Brendan (Gus Halper) comes closest to a fully fleshed-out figure on stage, and he gets the big, cathartic finale, but it feels like an afterthought. Devlin has abundant charisma and a lovely vibrato that calls to mind Kate Bush, but she, like everyone, is obscured under Walsh’s smug jokes (recurring digs about Irish playwright John Millington Synge that go nowhere).

The songs, by Gary Clark and Carney, are original numbers cleverly channeling the synth-heavy pop and New Wave of the ’80s, and the cast seems to enjoy jamming for its own sake. The concert sections are enjoyable, with the band thrashing their instruments, or pouting and preening for the camera. But about those music-video elements: The band’s manager, Darren (Max William Bartos) is chief cameraman, setting up shoestring-budget shoots with Raphina and the boys. Set designer Bob Crowley has placed a large screen upstage center, on which is printed a large image of the open sea (a rather blunt signpost of escapism). The screen seems an inviting space for either live video projection or perhaps fantasy footage—the band’s hopeful self-image. The lack of video in the production design seems a lame, counterintuitive choice.

But then, Taichman’s overall approach to the story is frustratingly hesitant. Rather than opt for the theatrical realism of Billy Elliot or the stylized world-building of Spring Awakening, she goes for a stripped-down, presentational aesthetic. Actors double as musicians, watching from the sidelines when not in a scene. There’s barely any set pieces or visual cues to relieve the dull, sludgy palate: a priest’s black cassock, gray school uniforms, that static, boring expanse of sea in the background. Such defiant minimalism starts to look like lack of imagination and nerve.

Perhaps you shouldn’t try to make a deconstructed art-house musical out of a film as deeply conventional and romantic as Sing Street. Unless producers are willing to sink millions into a lavish, full-color Broadway version—perhaps with teenage actors and adults as their fantasy future doppelgangers?—this sort of boiled-down compromise disappoints everyone: those who adore the movie, and those who simply want a musical that works and imparts joy. No doubt New York Theatre Workshop is hungry for another cash cow to transfer to Broadway, like Once (also a Carney film) did a few years ago. But this is a rush job with the wrong book writer and design team. One of the score’s catchier tracks is a freedom rocker called “Drive It Like You Stole It.” They might have purloined the right vehicle, but no one can get it into first gear. 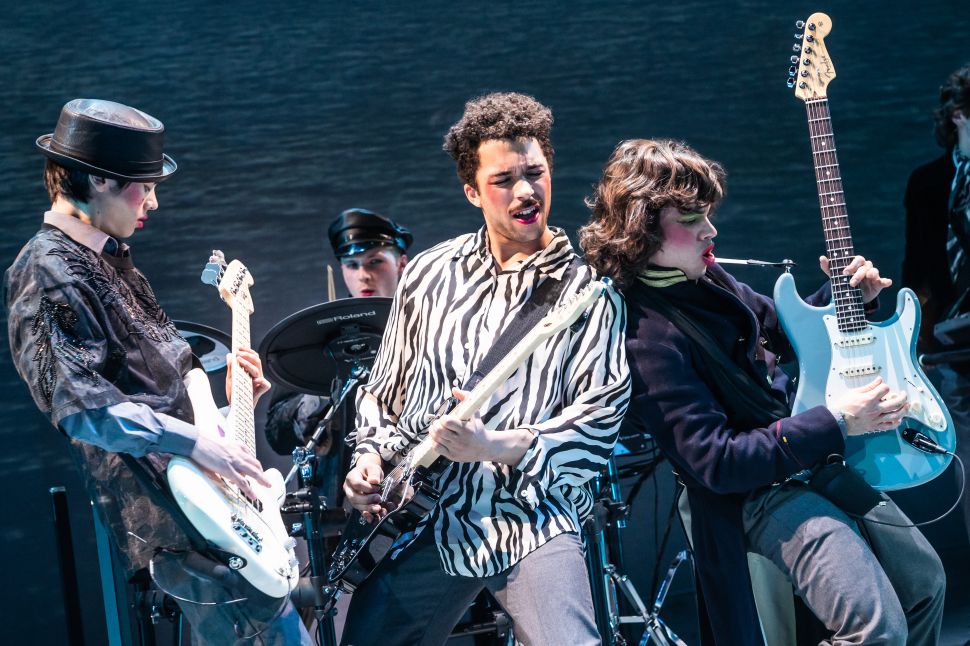