We know that J.J. Abrams’ Star Wars: The Rise of Skywalker is going to be a box office hit, but how much of a success remains to be seen. As the conclusion to the 40-plus-year Skywalker saga, expectations are understandably high. The film is tracking for an opening right around $200 million and the holiday schedule will afford a sizable boost to its long-term prospects. But digging a little deeper, there’s reason to believe Skywalker could be among the more successful Star Wars films released under Disney.

Though we can’t rely on just one facet of information when projecting a film’s financial performance, you can make the argument that the volume of pre-release social media activity provides an indicator of general audience interest. On that front, The Rise of Skywalker is generating the most social media conversation for a Disney era Star Wars films since 2015’s The Force Awakens, according to social analytics company ListenFirst.

SEE ALSO: ‘Star Wars: The Rise of Skywalker’ and the Challenge of Fan Expectations (Review)

The company measures volume (mentions and hashtag) on Twitter and search (Wikipedia page views), Black Friday-related posts published by the top 100 retailers of 2019, and reviews the average numbers of likes, comments, shares and retweets across various social media platforms around Star Wars movies two weeks before their theatrical release date to compile a composite of online audience attention. The findings roughly coincide with the box office performance of each Star Wars film released this decade, indicating strong or underwhelming social media activity ahead of release. 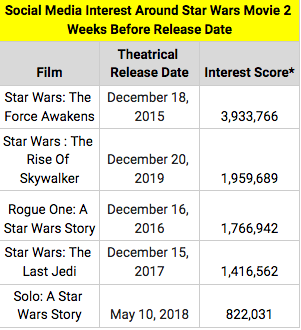 Despite the outpouring of activity, ListenFirst’s data has shown that the top performing social media post by Star Wars between Nov. 1 and Dec. 5 actually belongs to the Star Wars Disney+ series The Mandalorian. In fact, The Mandalorian is outperforming Skywalker on a per-post average basis but still feeding general interest into the overall Star Wars brand. That cross-pollinating dynamic is a defining feature of another Disney mega-franchise.

“While it was initially unclear if the proximity of The Mandalorian to the release The Rise Of Skywalker would hurt or help the film’s prospects, social media engagement two weeks before a film’s release is traditionally a strong indication of box office performance, and social media interest in Skywalker is high,” Tracy David, chief marketing officer at ListenFirst, said. “Just like with the interlocking Marvel movies, where one project helps build anticipation for the next one, the success of The Mandalorian is keeping Star Wars even more top-of-mind on social media ahead of the film’s opening weekend.”

Looking at the time period of 10 weeks to 2 weeks before theatrical release, Star Wars: The Rise of Skywalker’s interest level is most comparable to interest in Joker. Episode IX is tracking with an interest score of 4,131,014, while Joker had an interest score of 4,308,749 during the same time period ahead of its release. The DC film set an October record with a $96 million opening, and its 3.4x multiplier—the multiple of the film’s final gross to its debut numbers—highlights its impressive staying power. Generating conversation beyond just the echo chamber of Film Twitter seemingly translates to ticket sales in high-profile examples. 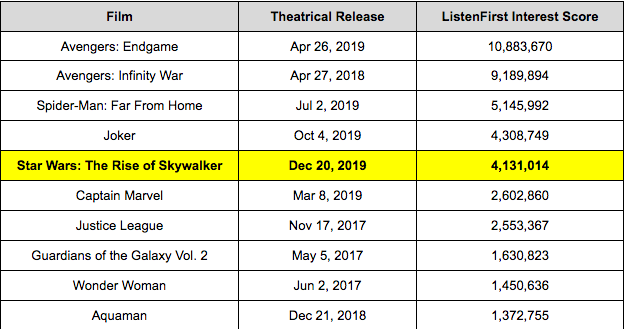 We believe Skywalker‘s box office floor sits around $1.4 billion while its ceiling is about $1.8 billion. If social media activity is indeed an accurate signifier of box office performance, Skywalker should open on the higher end of its $175 million to $210 million opening tracking projections. There are an abundance of factors that will play a role in Skywalker‘s overall run in theaters after that, such as reception, competition and legs. But all current data underlines the obvious truth we already knew: The Rise of Skywalker is a big deal.