With Tesla’s year-end delivery going strong and company stock climbing to a record high, the electric carmaker’s CEO Elon Musk could finally afford to relax a bit and look up random things online like a normal person in the days before Christmas.

Turns out, the internet is a pretty messy place. On Sunday, when the tech billionaire looked himself up on Wikipedia for the first time in years, he couldn’t believe what he read.

SEE ALSO: Google CEO Sundar Pichai Is the Most Expensive Tech CEO to Keep Around

“Just looked at my wiki for the first time in year. It’s insane!” Musk tweeted on Sunday afternoon. “By the way, can some one please delete ‘investor.’ I do basically zero investing.”

Just looked at my wiki for 1st time in years. It’s insane! Btw, can someone please delete “investor”. I do basically zero investing.

At the time, Wikipedia described Musk as a “technology engineer, entrepreneur and investor.” But Musk claimed that he doesn’t own stakes in any companies other than those founded by himself, primarily Tesla and SpaceX.

“If Tesla and SpaceX go bankrupt, so will I. As it should be,” he explained in another tweet.

If Tesla & SpaceX go bankrupt, so will I. As it should be.

Thanks to its open collaboration nature, Wikipedia was quick enough to respond. At 7:25 p.m. on Sunday, exactly five hours after Musk posted his first tweet, a Wikipedia user deleted the word “investor” from Musk’s knowledge page using a mobile device, according to Wikipedia’s edit history.

Ten minutes later, another user deleted “investor” again using a desktop. It’s unclear how many mentions of “investor” had been on the page before those changes were made.

At 8:31 p.m., a third user “replaced ‘investor’ in short description with ‘business magnet’ as requested by Elon Musk,” according to Wikipedia. The change is not yet visible perhaps due to the obvious typo, which Musk apparently overlooked during his chat with Twitter fans.

Musk’s Wikipedia page is in a semi-protection mode, meaning that only registered and confirmed users are allowed to edit it. Wikipedia might as well consider upgrading it to the full-protection mode, which allows only the administrator to edit, since the Tesla CEO is clearly not happy with how the crowdsourcing approach has worked out so far.

“My wiki is a war zone with a zillion edits. At least it’s obviously not curated!” Musk wrote in a response to a Twitter comment on Sunday. “Some day, I should probably write what *my* fictionalized version of reality is.”

My wiki is a war zone with a zillion edits. At least it’s obviously not curated! Some day, I should probably write what *my* fictionalized version of reality is 🤣🤣 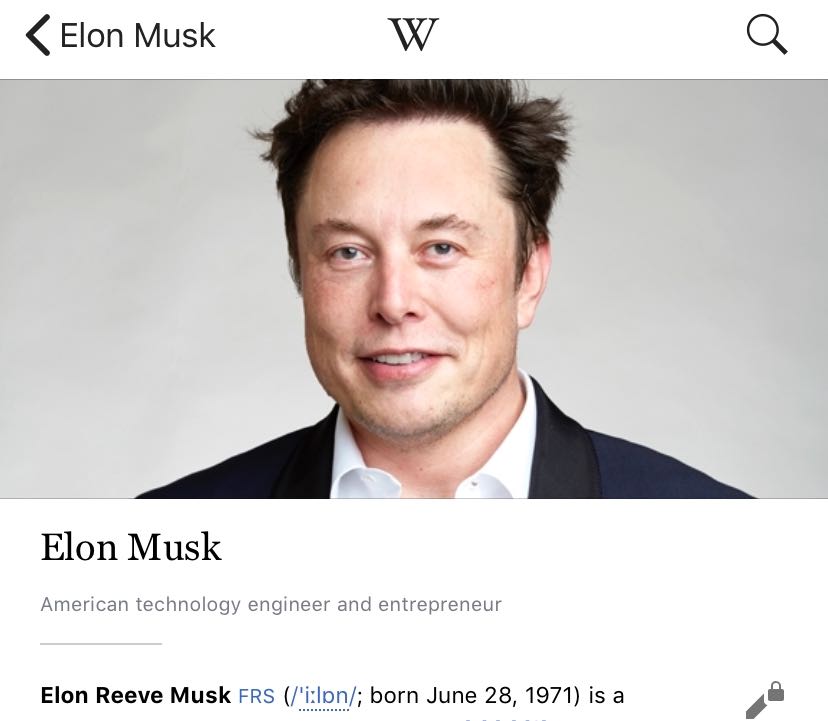