The Aeronauts reunites Felicity Jones and Eddie Redmayne, who co-starred memorably in The Theory of Everything (he won the Oscar), in a family-oriented adventure about daredevil hot-air balloon pioneers in 1862. It never reaches anywhere near the level of their previous film, but it has moments and is generally entertaining.

She’s Amelia Wren, a fictional balloon pilot whose dream is to break records in heights never achieved before. He’s James Glaisher, an actual 19th century meteorologist whose goal is to teach the world about the effect of weather on science. Based on facts but heavily overwhelmed by poetic license, it has a few breathtaking moments, like the one in which she climbs up the side of the balloon ravaged by whipping winds 35,000 feet above the Earth to find a lever that will slow the speed of ascendance.

But mostly the film offers computer generated contrivances while the genuine thrills never lift off and fly. Anxious to be taken seriously, James shows no patience in Amelia’s flamboyant theatrics, which include throwing her dog overboard to the horror of the spectators below (don’t worry, he’s wearing a parachute), while she insists show business stunts are the magnet for financial backers.

Their needs are discordant: she wants to break records and he wants to collect data to advance his controversial theories about weather. Call him a cross between a weatherman and an early predictor of climate change. Hers is the fun part. But as they soar higher, the air thins and the temperature plummets, they must join forces and make difficult mutual decisions about life and death in order to survive.

Both a spectacle in the air and an intimate drama about a relationship that grows under daunting conditions, The Aeronauts grows on you, but all attempts at character development are communicated through a series of annoying flashbacks. Her never-ending mourning for her husband, who died falling out of a balloon on one of their rides together, gets tiresome, although the balloon itself is a marvel of ingenuity and design.

In reality, James teamed up with a male balloonist named Henry Coxwell, but director Tom Harper and script writer Jack Thorne changed genders to add some fictional romantic flavor. The dialogue is dull as dried glue, but the acting is fine, although the boundless range and skill of Redmayne is wasted, which might account for the reason he doesn’t appear to enjoy the ride as much as he could. Unfortunately, we’ve seen it all before with motorcycles, submarines, airplanes and ships at sea in peril instead of hot-air balloons. 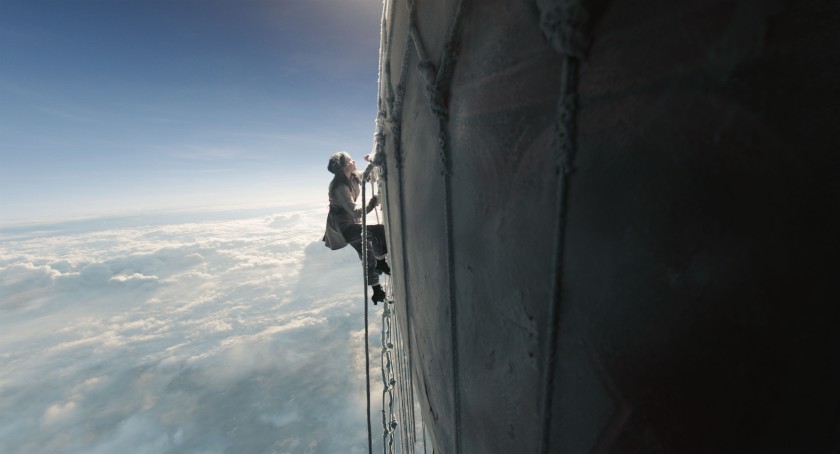