One week after The Mandalorian‘s debut on Disney+, it was among the most in-demand streaming series in the market. Shortly before Thanksgiving, the live-action Star Wars series had surpassed Netflix’s Stranger Things in audience demand. Now, the flagship original series from Disney+ created by Jon Favreau (The Lion King) is arguably the most sought after show in the world.

For the prior seven days ending December 1, The Mandalorian was 31.9 times more in-demand than the average title on a global basis, good enough for number one in the world, according to data provided to Observer by research firm Parrot Analytics. It outpaced fellow hits such as HBO’s Game of Thrones, The CW’s The Flash, Netflix’s Stranger Things and The Crown. 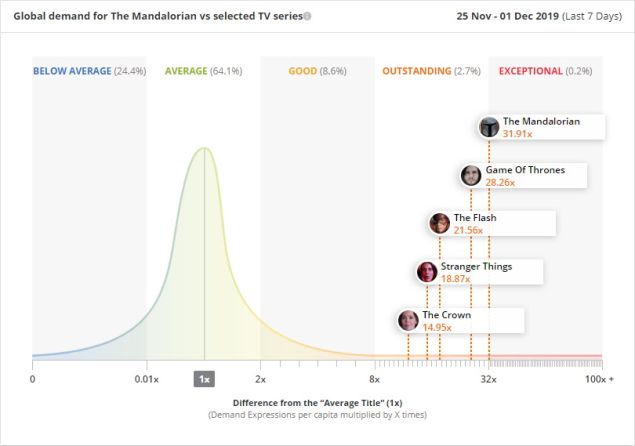 As the year end draws near, The Mandalorian, which debuted only three weeks ago, is now in the running for the Most In-Demand Series Debut in the World at the upcoming Global TV Demand Awards. Other contenders in this awards category as of now include Amazon Prime Video’s The Boys, HBO’s Chernobyl, Netflix’s The Umbrella Academy, and Apple TV+’s See.

The Mandalorian has aired just four of its planned eight episodes since its debut on Nov. 12. Thanks to its weekly release schedule, the show has enjoyed a sustained upward trajectory thus far through its run. Buzz is capital in the streaming wars and the pop culture conversation continues to get louder with each passing Baby Yoda meme. Episode 5 will hit Disney+ on Dec. 6 with the remaining episode arriving Dec. 13, Dec. 18, and Dec. 27 (bookending J.J. Abrams’ Star Wars: The Rise of Skywalker).

Following its U.S. launch on Nov. 12, Disney+ went live in Australia, New Zealand and Puerto Rico on Nov. 19 and is set to launch in the United Kingdom, France, Spain, Italy, Germany, Ireland and a number of other countries in Western Europe on March 31, 2020. Within two years, Disney hopes to rollout the streaming service worldwide. According to a Nov. 26 report from Market Watch, Disney+ is averaging nearly one million new sign-ups per day.


Parrot Analytics tracks video streaming, social media activity, photo sharing, blogging, fan and critic rating platforms and other consumer demand sources to put together a composite of viewership and growth. Demand expressions represent the total audience demand being expressed for a title within a market and not specific viewership statistics.