“A sad tale’s best for winter,” Shakespeare’s Prince Mamillius prefaces his yarn of sprites and goblins. Charles Dickens and countless others have taken the hint and sprung ghost stories on us at Yuletide. So the timing’s perfect for Lucas Hnath’s superbly unnerving story of psychics and hidden dimensions, The Thin Place. We’re bundled up, trying to fight thoughts of mortality that the season brings; it’s time to get the crap scared out of us by Emily Cass McDonnell.

The petite, blonde actor exudes a sweet wistfulness tinged with sadness. Although McDonnell has been acting for a couple of decades, she has the aura of a wise child, watchful and serious, her smile furtive and flickering. She’s a wonderfully focused and natural listener, but her speaking is just as vibrant, a fluting voice with plummy bottom notes. She can make a simple nonverbal “mm-hmm” tremble with traces of excitement and apprehension. (Her slight upward inflection on “thin place?” will make your nape prickle.) I’m going into all this detail not just because McDonnell deserves praise for work in plays by Annie Baker (The Antipodes) and Wallace Shawn (Grasses of a Thousand Colors) but because she’s the admirably sympathetic yet oddball spirit guide through a genuinely scary play. Narrators are often unreliable for dramatic effect. McDonnell’s Hilda, settled in a comfy chair and sipping her tea, is all too reliable, even as she leads us into gut-churning darkness.

Hilda reminisces about her late, beloved grandmother, a woman who believed in mentalism and tried to train Hilda to read minds. Results were mixed. When the grandmother, who had been living with young Hilda and Hilda’s mentally unstable mother, is forced to leave after an argument, and later dies, our narrator is left with a wound in her life. She kept trying to reach her grandmother through her mind, lying in bed in the dead of night. Then one day, Hilda tells us, she visited a psychic named Linda (Randy Danson). Linda (note the near-anagram with Hilda) contacts the grandmother and reassures the granddaughter that she’s in a happy place. Hilda befriends Linda and begins to spend days with the medium, who hails from England and speaks in broad, Northern accent.

One night, the two women attend a party with Linda’s friends: Jerry (Triney Sandoval), her American cousin who is a political advisor, and Sylvia (Kelly McAndrew), a wealthy woman who seems emotionally and financially entangled with Linda. Wine-fueled party banter ensues, discussion of charity and whether Linda’s work as a psychic is psychologically healing to clients or just fraud. Hilda breaks her silence to share an eerie story about her deranged mother living with a stranger to whom Hilda spoke on the phone. Then her mother disappeared. After the party, Hilda and Linda drive to Hilda’s childhood home, now abandoned. They go in. I’ll stop here.

This is the sort of elusive, atmospheric piece I would urge you simply to see, unburdened by excessive description or analysis. It’s a twisty tale that throws you off the scent and doubles back behind you; one wonders if Hnath wrote it like a person exploring a strange house for the first time. Staged by the nonpareil Les Waters (frequent collaborator with another ace spectralist, Anne Washburn), the Playwrights Horizons production begins in spartan simplicity: two easy chairs facing out, a small table, and that’s it. (Designer Mimi Lien creates a false back wall, and subtly distresses the black surfaces with dabs of white paint.) Lighting designer Mark Barton keeps the audience illuminated for the first half but changes the levels radically until we find ourselves leaning forward, straining to see into pitch black. And the sound is by Christian Frederickson, subtle modulations of room tone and offstage noises, electric cracks and pops that can be alarmingly sharp and loud. As written and designed, The Thin Place’s dramaturgical goal is to make the story—and a growing sense of dread—happen in the audience’s head. Even as theatrical effects increase and ratchet up tension in the last 20 minutes, the presence of evil that you sense is your own invention.

What exactly is The Thin Place about? The title refers to discrete spaces—a church basement, a clearing in the woods—where the membrane between this world and the next is particularly porous. The way Hnath frames it, it’s also the moment when storytelling becomes the thing itself, when the act of narrating summons the dead. Hnath has always been interested in the theatrical possibilities of ideas in action, their transmission from one person to another. In other words, Hnath writes argument plays; he takes an issue and flips it repeatedly to get at different angles, revealing how constructed identity and ideology is, whether it’s marriage and independence (A Doll’s House, Part 2) or the limits of morality in organized religion (The Christians). When he tackles a social or political issue, the payoff is limited; a semi-surreal riff such as Hillary and Clinton never rises above sub-Shavian debate with a garnish of experimentalism.

I much prefer when Hnath goes to unstable or irrational head zones, contending with madness or mortality—as he did at Soho Rep in A Public Reading of an Unproduced Screenplay About the Death of Walt Disney (2013). That was one truly weird play—Larry Pine’s dying Disney polishing his myth, doing magic tricks and dancing on the edge of the abyss. The Thin Place is a welcome return of Hnath the creepy fabulist, the haunted magician who revels in the uncanny and liminal. It’s so scary in the dark, but it could be worse: The lights might come back on. 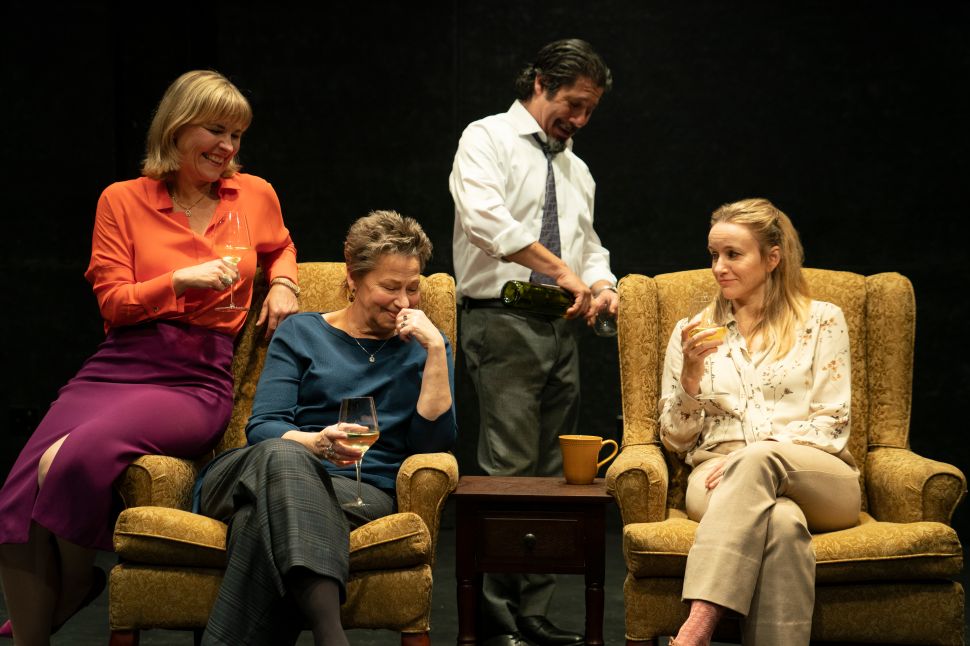