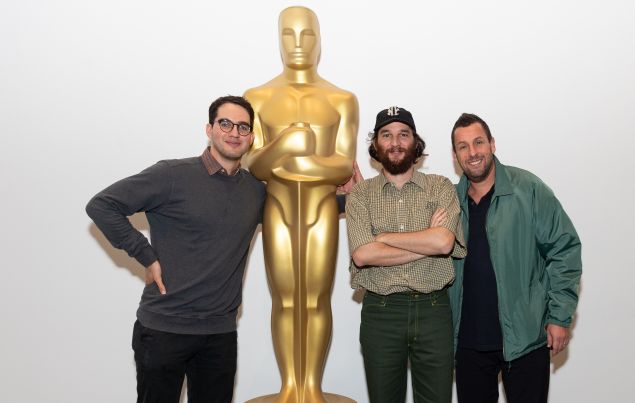 The Safdie brothers, the directors behind 2017’s unnerving Good Time and this week’s sensory overloading Uncut Gems, have been responsible for some of the most anxiety-inducing, tension-riding films in recent cinematic memory. So much so, that when I get the chance to speak to them about their upcoming A24 release, I have to ask: are they in cahoots with the makers of Xanax? No other directors leave one so much in need of a post-game cool down upon exiting the theater than the NYC-raised siblings Josh and Ben.

A24’s Uncut Gems follows New York City jeweler and degenerate gambler Howard Ratner (Adam Sandler) as he doggedly pursues his next high-stakes big score. The film exerts a paralyzing expectation of the other shoe dropping throughout its run time. Loosely inspired by their father’s professional life in the diamond district, it’s exemplary of an approach the Safdies call “gutter realism”—films deeply embedded in fully textured sub-cultures. It’s also a career-best work from Sandler. There’s a relentlessness to it all.

While the Safdies merely laughed off my theory during our conversation, they did open up about their formative college years, working with Sandler and their mysterious upcoming 48 Hrs remake.

Observer: As a fellow New Yorker and member of the tribe, I’m curious how two young Jews from Queens and Manhattan ended up at Boston University?
Josh Safdie: Well, I wasn’t getting into NYU (laughs).

Ben Safdie: I ended up at Boston University because of Josh. I was going to be a physicist so I was going to school [somewhere else] for that. Josh knew I was not totally convinced and there was a film class [at BU] and he said, “Come up here and watch these insane movies.” I did, and the teacher was incredible, and I was like, “Oh my god, you can learn stuff like this?!” It was amazing. So I dropped out and went there the next year and we were together.

I’m very close with my brother as well. We’re best friends and we talk every day, but I don’t think I could work with him in a high-stress environment like filmmaking. What’s that dynamic like for you two?
JS: Being able to have a vicious argument with somebody and know that within a few hours everything will be OK makes it easier. We had a tumultuous childhood, but we always had each other all the time, and that puts things into perspective. It’s been this grounding force. It helps to have a partner. Our Dad would always say, “He’s your partner in crime.”

BS: There are moments where it gets so insane and maybe something isn’t working—all it takes is a look of the eye between us. That wouldn’t work with anybody else. When it does get insane, it’s nice to be able to have that sort of connection.

JS: In terms of division of labor, Benny is a boom operator so he’s literally right near the actors with the boom pole and I’ll be framing the movie with [cinematographer] Darius Khondji. We’ll convene and I’ll say, “How’d it feel?” and he’ll say, “How’d it look?” We don’t do playback, so it’s just complete trust. But we have such an unspoken communication with each other so he knows, if I’m vibing with one actor to not add another voice and vice versa. It’s a very lucky thing, we’re very lucky to have each other.

Uncut Gems has been in development for the better part of 10 years. Why is this the project that has endured for you?
JS: We would go and make these other films and come back, but the character of Howard was…I don’t how to describe it. I keep these journals and I was saying to somebody, “If anyone ever found my journals, it would be so weird” because they’re not Dear Diary type of things. They’re all idea based, and I’m talking about the character through my own life. So I’m saying “Howard this, Howard that,” but it’s actually me this, me that. It’s like, you don’t abandon the character because the character is how you’re kind of looking at life and viewing through life. It was just the North Star.

BS: And on top of that, it wasn’t like all bets were off for other movies. It was like, “Oh, that didn’t happen. Let’s explore another part of that world.” So each movie we were doing in between was an offset of the interests that were there. So we were always kind of learning more about that as we were moving forward. It never really died because the interest was just getting deeper.

Over the last 10 years, other actors have been attached to the project. What did Adam Sandler bring to the table that surprised you?
JS: Once we got into it with Sandler, the surprises became micro. Little things he did, the subtleties of his performance, were the things that surprised us all the time. Real subtlety. With Howard, he’s such a maximalist guy that the little tiny things he would do—

BS: There’s a moment where Howard is sitting with another character and that guy points to another guy. Sandler does this thing where he turns to him, but does this subtle pause with his eyes to catch a glimpse, but not to make it look like he’s looking. That wasn’t in the script, he just did it.

You’ve described your filmmaking as “gutter realism” before. What’s that about?
JS: It’s tough. It’s like being a private investigator. In the diamond district, I started costuming my look a bit when I went; the more I started hanging out there, the more jewelry I started to wear, the more I would change my appearance slightly to make it more acceptable by the people there. But ultimately, it’s just a matter of empathy. It’s sincere. You meet people and you have to be inspired by them.

BS: You have to listen most of all. It’s important to remember that you don’t know everything. I want to understand in a very sincere way.

JS: It’s like making a science fiction movie. Yes, you can hang out with scientists, but the research you have to do is different. All the movies we’ve been making have a brand of journalism in it. We are going out into these worlds, these subcultures, and taking notes with our eyes and hanging out with people. Especially with Sandler, when we went out and did the research with him, we’d be with a jeweler and he would do this little mannerism and Sandler would look across the room at us and we’d know we’re on the same plane, and we’d have to incorporate that mannerism because it speaks to their whole world. So, it’s a very, very big part of the process because it’s what makes the fiction real.

I haven’t heard anything about your 48 Hrs remake in a while. Is that still happening?
JS: We did a few drafts for Paramount and I think the general consensus was “This isn’t a remake. It’s more of a new movie in a weird way. It’s a very cool, original movie. Let’s lean into that.” So we’re leaning into that. I met with [48 Hrs director] Walter Hill recently for the first time and I told him, ‘Let’s get this out of the way. We’re not remaking your movie.’ It’s kind of a weird version of the movie. And he said, ‘Yeah, I wasn’t surprised. No shortage of original ideas here.’ And so we’ll see what happens with that, now that we’re leaning more into an original thing. 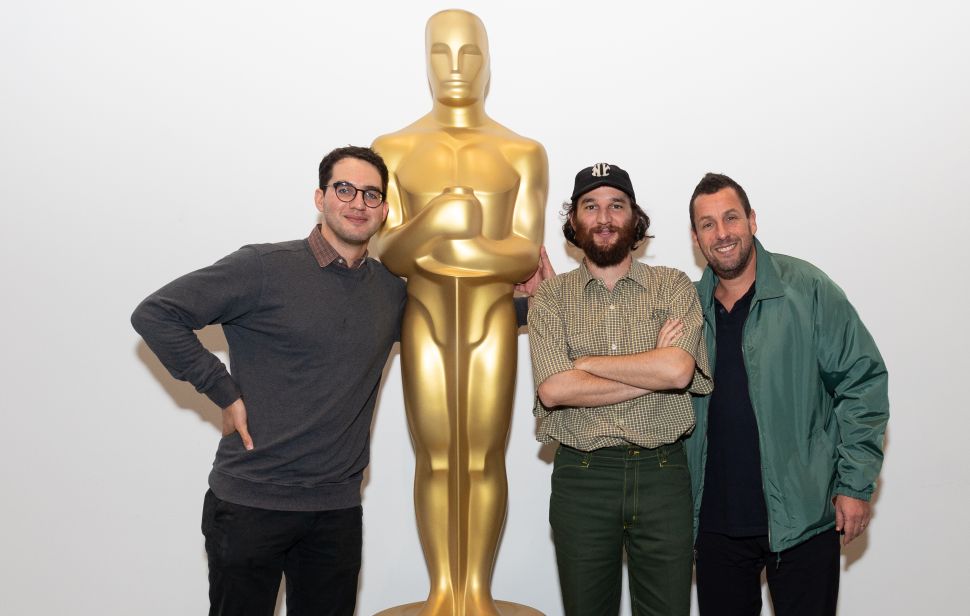