Who is Howard Ratner, the unhinged snapping turtle of a Diamond District jeweler played with ferocious abandon by Adam Sandler in the high wire gambling drama Uncut Gems?

Ask Demany (Lakeith Stanfield), a fixer who works on commission to rope hip hop stars and NBA millionaires into Howard’s bulletproof-glass enclosed showroom, and he’ll announce to the world that Howard is a “crazy ass Jew.” According to Dinah (Idina Menzel), the wife with whom he has three children and to whom he has become increasingly estranged, he is “the most annoying person I have ever met.” Arno (Eric Bogosian), the brother-in-law and loan shark to whom Howard owes an obscene amount of money, will let you know simply that he is a moron—and that’s after he instructed a pair of thugs to yank off Howard’s clothes and stuff him in the trunk of his car as if he were a set of golf clubs.

In truth it’s hard to get a read on Howard and why he behaves in the boorishly self-destructive manner that he does. We spend a week deep inside the 48-year-old’s chaotic existence in the spring of 2012, which is when the film, directed by Josh and Benny Safdie and written by them and their longtime collaborator Ronald Bronstein, takes place. The man is perhaps so hard to decipher because, to quote the gastroenterologist who is in the middle of giving him a colonoscopy when we first meet him (one of his only moments of peace in the film), Howard is “well cleaned out”—and not just in the way the good doctor means. Howard is also emptied out spiritually, emotionally (and, most pressing to his ability to survive the week) financially.

Yet we still end up feeling like we know him—which is almost entirely credit to Sandler. The actor imbues Howard with all the rage and isolation, the sadness and arrested development, that he has spent his career hinting at with his comic creations from SNL’s Canteen Boy to Happy Madison and beyond. The character reverberates with these conflicting energies; we don’t understand him as much we as we feel him. While there’s nothing particularly funny about Howard or the movie (if you laugh, it will be more to relieve the film’s almost unbearable tension), despite or because of this, he is the fullest expression of Sandler and his singular talents that we have witnessed in his sometimes confounding and often infuriating 30-plus-year career.

Part of the success of the performance is the manner in which the Safdies play with and reframe Sandler’s persona and reputation for outrageousness and immaturity, using it to fuel their movie’s nihilism. But then the film, which features The Weeknd as a coke-snorting, groupie-canoodling version of himself, in many ways is a treatise on the idea of persona, and all that it reveals and disguises.

Sandler’s primary costar is the retired NBA power forward Kevin Garnett, who also plays a version of himself, in his final year with the Celtics and embroiled in a tense up-and-down playoff series against the 76ers. Showing a remarkable screen presence (he far outplays former teammate Ray Allen, who was a hoops prodigy in Spike Lee’s 1998 film He Got Game), Garnett plays himself as a tender and insecure superstar who becomes convinced he can only play up to his potential if he is in possession of an uncut opal that Howard has procured, perhaps illicitly, from an Ethiopian mine. Howard is certain that this bit of information is all he needs to score big with a local bookie (played with hard-won authenticity by NYC sports talk legend Mike Francesa) and later at Mohegan Sun.

With their sixth feature, the Safdies have a lot to say about a lot of subjects—Judaism, celebrity and sports culture, and post-recession capitalism just to name a few—and most of it is said at top volume. Whether it’s Howard’s grating mishegas, the angry demands of the many who want a piece of him, or Daniel Lopatin’s 80s-informed synth-heavy soundtrack, the movie is a lot to listen to. You may even find yourself plugging your ears at points, which is just fine. Most of the relevant information is ably conveyed with the gritty and probing camera work of Darius Khondji, who also shot David Fincher’s Se7en and who is as comfortable exploring the innards of Howard’s showroom as he is the endless facets of his prize gemstone.

The Safdies’ film is a cinematically expressive tightrope walk that seems designed to leave your blood pressure permanently spiked. It can be relentless and hard to take, but it is brimming with surprise and a vivacity that radiates off the screen. By not only giving us a glimpse of a take-no-prisoners New York City that is quickly vanishing but also showing us in full flower the true spectrum of colors possessed by a star many of us wrote off years ago, Uncut Gems ends up providing that rarest commodity in modern film going: a genuine sense of discovery. 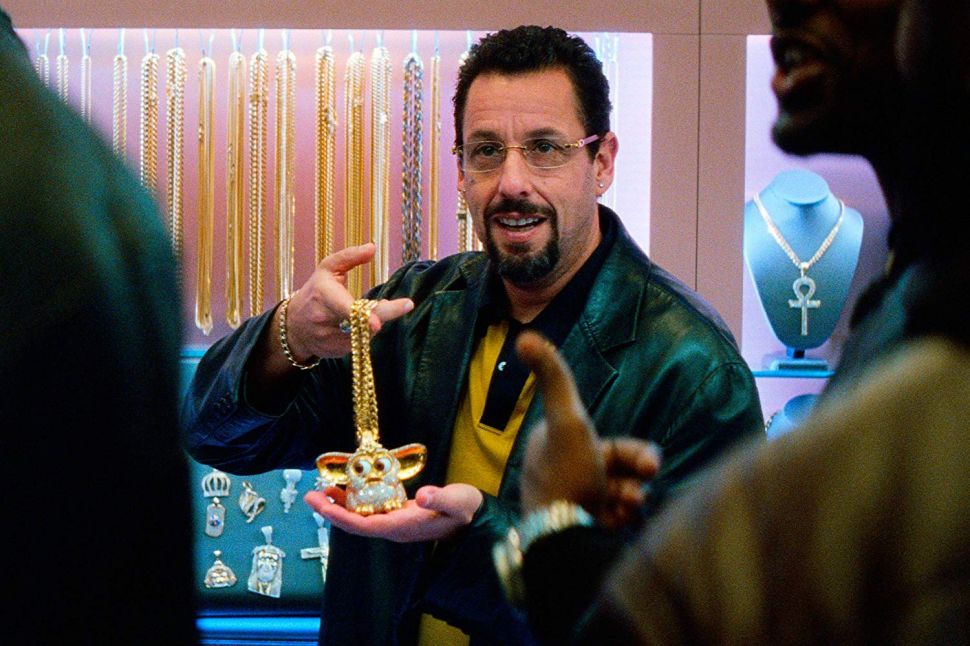