Vanessa German doesn’t feel like there was a moment she decided to become an artist, rather her upbringing made it somewhat predestined. “It’s impressive to me that my mother, from the time that we were very little, made us artists. She was like, ‘You have to make that yourself. You want some socks? You better learn how to knit. You want some new jeans? You’re going to have to take that pattern and I’ll show you how to read and understand a pattern.’ My mother made us make our own lives.”

A self-taught artist, poet, writer and activist, German calls herself a “citizen artist,” the definition of which she says is constantly evolving. “It looks like making work and offering people purpose through the work that I am making.” German explained. “It also sometimes looks like I have to write poems for people whose children have been killed because they ask me to do that. Sometimes it’s hard and not romantic. But I think about how to be deeply dimensionally purposeful as a human being and in the space that I am.”

Around 12 years ago, German was living in a building not that far from her current house in Homewood, Pittsburgh, working out of the basement. After noticing that neighborhood kids would crowd the 4-by-12-inch basement window to watch what she was creating, German eventually brought her practice outside, onto her front porch. The kids continued to watch her work and she gave them art projects of their own to complete.

“I would give them something to play with and something to make, like with clay, and they would get really quiet together, in this industrious, studious time. And I found something similar in ways of feeling and being that I experienced in my studio—[that’s] what scientists study about the neurology of art…what happens to the physical body and to the brain when you’re creating. All of those feelings were happening for the kids because I just shared something with them.”

From this, German conceived of the community art space ARThouse, a place where kids could go to become artists. In a neighborhood that has one of the highest murder rates in Pittsburgh, ARThouse offers a sense of hope and an educational space for kids to spend time.

In her latest exhibition: “Trampoline: Resilience & Black Body & Soul” German took inspiration from the late Toni Morrison’s 1993 Nobel Lecture in Literature. In the speech, Morrison called on artists of all mediums to “make up a story… For our sake and yours, forget your name in the street; tell us what the world has been to you in the dark places and in the light. Don’t tell us what to believe, what to fear. Show us belief’s wide skirt and the stitch that unravels fear’s caul.”

In the show, German features sculptures that she calls “power figures” displayed alongside altars meant to serve as protectors for black Americans. The heads of the sculptures are painted black and their bodies are made of an array of different found materials.

In the press release for the show, German delves into what she is trying to convey with this body of work. “I am in Love with the deep survival, elastic resilience and ordinary, creative, genius of Black People. For the ways that we make ourselves bright against the slaughter of our own names—acts of ordinary, restorative, creative insistence. The insistent force of making, seeing, playing, protection—loving—whose evidence shapes the culture of a society that never visioned the Black Body into freedom, resources or power.”

As Germain explains, he exploration of these themes led almost directly to the materials with which she works. “This little girl asked me one question while she was [seeing the exhibition] ,and she said, ‘Why is everything you make so black?’ At the time [of creating the works], I was really working on understanding how to make a life for myself that felt right. What I found was that it felt right for me to gather materials from the world around me.”

German has made it central to her process of creating to be mindful of the materials that she uses and where she sources them from, usually repurposing and recycling items that she finds around her Pittsburgh neighborhood.

“I find materials that I want to use and I have to spend a little bit of time figuring out how to use them,” she says. Everything from rusty nails, bottle caps, old shoes and broken cutlery are used in the visually compelling sculptures.

The power figures in the show tell an array of stories. There are women escaping violent victimization; there are the harrowing effects of gun violence. But above all else, the show is an exaltation of self-preservation, survival and resilience. 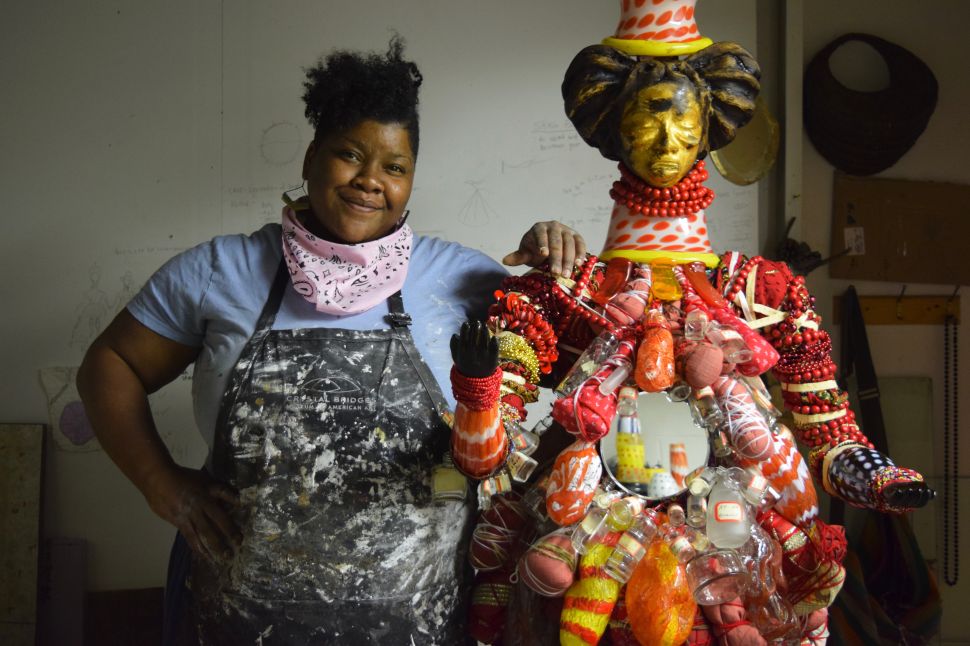