The most emotional episode of television in the last year features a character that viewers had essentially never met prior to the episode—in fact, no regular characters from that show appeared for more than a two-second cameo. The new character is the only one with any dialogue for the first two-thirds of the episode.

Oh, and it’s a cartoon set on a version of the moon that features a gold city and a four-eyed bug monster.

The new DuckTales series is gearing up for its third season now, and just like… well, almost everything on TV these days, it’s digging hard into nostalgia. There are reboots and revivals and re-imaginings on virtually every channel and streaming service. Nostalgia is like a cheat code when creating entertainment. If you can remind people of something they loved years ago, the job of making something appealing now is that much easier. If you ever wanted an answer for why Hollywood offers so many remakes, well, that’s it.

Or, as Launchpad McQuack literally says in a second-season episode of DuckTales, in an all-time meta moment, “Ah, cool! A big-budget remake of a thing I loved as a kid! Those are always great.”

The allure of making something with a built-in fanbase for many studios out there seems to be that you don’t have to actually make something good. The recent comebacks of Will & Grace, Murphy Brown or Hawaii 5-0 might be, in your estimation, quality TV, but the catch is that they didn’t have to be. All the shows needed for success was the title and the nostalgia; quality comes second.

But there’s a genre of remake/revivals that doesn’t quite have that benefit. Kids shows. DuckTales, Muppet Babies, and their ilk might convince parents to introduce these shows to their kids through nostalgia, but they still have to have quality to keep the kids in the fold.

For example: That aforementioned “most emotional episode of television in the last year.” It was Season 2, Episode 7 of DuckTales, called “Whatever Happened to Della Duck?!” It chronicled the 10 years Della—Huey, Dewey and Louie’s mom—spends stranded on the moon after commandeering a McDuck spaceship and getting caught in a freak storm. In true The Martian style, she’s all alone, making desperation videos for her sons to see, surviving on “OxyChew” (oxygenated gum), and trying to come up with ways to escape the moon. In an epic voiceover turn from Paget Brewster, Della balances the jokes necessary to be a kids show with the desperation of a mother hiding out from a metal-eating “MoonMite” while trying to get back to the triplets who hadn’t hatched (you know, because they’re ducks) before her departure. It’s genuinely funny, but there’s big-time emotion in her desire to return home.

Della is basically a character with no history. The comics have hinted at her existence here and there over 80 years, but she’s basically an enigma, new to kids and their original-DuckTales-loving parents alike. So the episode isn’t exactly a nostalgia-fest. On the other hand, there are heavy references to things we know throughout, down to them giving lyrics to the “Moon Stage Theme” from the DuckTales NES game.

In the second-season Christmas episode, young Donald Duck is voiced by Russi Taylor, who voiced Huey, Dewey and Louie in the 1987 version. Any children watching would never notice. Adults? They probably ate up that well-known voice like candy. Familiar faces Gladstone Gander and Doofus Drake and Duckworth all show up on occasion in the new series. But then Mark Beaks—who couldn’t be more of a direct allusion to Mark Zuckerberg if they had named him Mark Duckerberg—was entirely invented for this series. Did I know all of that? Kind of! I had to look up a couple of the references to make sure I didn’t forget anything. Do my kids? Not a chance! Does it matter? Nope!

Case in point: Muppet Babies. The characters of the new version, itself in its second season, are foreign to children, but are familiar to those of us who are parents now… with one exception. Summer Penguin was a new muppet created specifically for this series (I imagine to offer slightly more gender balance). There are occasional references to her being the newest member of the group, and other muppets who have been phased out of regular character status pop up as guests (Rowlf, Swedish Chef, Sweetums) or in background photos (Uncle Deadly, Skeeter).

But that’s what I noticed. My 9-year-old daughter noticed that Gonzo is funny, that Animal is crazy, that the songs are catchy. My 2-year-old twins noticed that… well, I probably shouldn’t let them watch as much TV as I do, but they noticed bright colors and exciting characters, and they ask “Where Kerpit?” all the time.

In fact, I’ll take it a step further: I could (and would) argue that the two least successful turns the new DuckTales series has made were two of the most blatant examples of fan service: The time travel appearance of Bubba the Caveduck, and the gratuitous introduction and use of the Gummi Bears’ Gummiberry Juice. Both—especially the juice—were plot points that made little to no sense in the world of Duckburg as established in the new series, rather they were objects of fan service for the older generation.

The nostalgia-fests will never end. Not as long as they’re wildly successful ventures. In the next 20 years, Baby Nicky from Fresh Prince will have his own series, and Jim and Pam’s baby will work in a new office, and George Michael Bluth will have his own dysfunctional kids. We’ll get new shows, to be sure, but there will also be an endless cycle of rehash attempts. Some will succeed, some will crash and burn. The ones that succeed will be the ones who know they still have a duty to make something new.

And the easiest way to know the job has just started is to create a series that relies on nostalgia for an audience that has no built-in nostalgia. It’s the best of that world: Lure the parents in with fond memories of their childhood, keep them (and their kids) around with a new show of genuine quality. 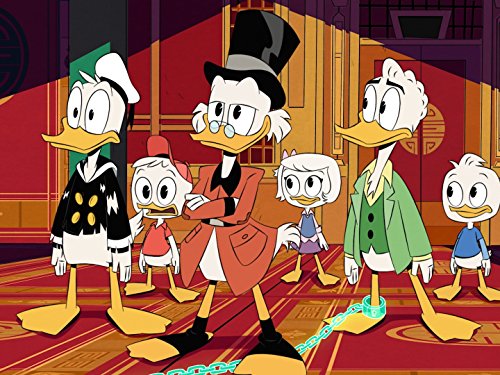