An ideal performance of Alban Berg’s eldritch opera Wozzeck may fairly be required to disturb and disorient its audience. A new production of this work at the Metropolitan Opera on Friday night achieved these goals, though I’m afraid not for all the right reasons.

To be sure, it feels a little odd to call a performance of so downbeat a piece a triumph, but that’s exactly the right word to describe Yannick Nézet-Séguin’s leadership of this production’s enormous musical forces including the Met Orchestra. The conductor’s reading was fleet and crystalline, leaning toward a cool “modern” clarity instead of the heavier, more romantic take more traditional at the Met until now.

SEE ALSO: Gods, Courtesans and Freezing Lofts: The Best of Opera of the 2010s

The cleanness and precision of the orchestral playing were almost like an x-ray of the score, with inner voices revealed amid a transparent texture. But there was nothing skimpy about the sound: it’s recognizably rich without ever being opaque.

Nézet-Séguin’s approach was majestic yet, paradoxically, modest; deeply personal without being solipsistic. Even the great D-minor interlude in the last act, played with searing emotion and virtuoso brilliance, felt organic, never overshadowing the rest of the work. The fortissimo passages were beautifully full but never coarse.

These virtues applied as well to the singers in the cast. Baritone Peter Mattei, in his role debut as Wozzeck, sang every note with ravishing tone and a Lieder expert’s sense of proportion. Less glamorous of voice but more incisive was soprano Elza van den Heever as the tormented Marie in a tightly-controlled, almost chaste reading.

The general sense of the bizarre in Wozzeck can be used to excuse all sorts of oddness, though one questionable bit of casting set veteran tenor Gerhard Siegel as the Captain opposite the relative newcomer Christian van Horn as the Doctor. While the bass-baritone poured out velvety sound, he tended to recede dramatically in contrast to Siegel’s more conventionally brash approach.

With the exception of Siegel, in fact, the entire production felt muted dramatically, verging at times on the downright dull. Director William Kentridge, whose 2015 production of Berg’s Lulu I admired greatly, seems to have little connection with Wozzeck, imposing on the work his familiar animations and pen-and-ink illustrations. These motifs and techniques worked better in earlier productions like The Nose, and now feel almost like clichés. Every Kentridge show looks like every other Kentridge show.

What’s worse, the production suggests that Kentridge’s understanding of Wozzeck is shallow. He has moved the time of the action forward about a century from the era in which the original Georg Büchner play is set in order to impose imagery from World War I on the piece, but it’s never clear if the opera is supposed to be taking place before, after or during that conflict.

It’s hard to tell whether Kentridge is trying to associate Wozzeck’s emotional disturbance with the horrors of WWI of if he is simply parading the imagery of Flanders and gas masks as a simplistic antiwar statement, but either way I think he has sidestepped the core meaning of the work. Wozzeck, like Carmen, is a work set among the military in peacetime, when boredom and routine lead to violence and madness.

Amid all the film clips and sketches (the projected animations are practically nonstop for 90 minute running time), Kentridge has left his two principal performers hanging out to dry. Mattei and van den Heever are assigned rudimentary blocking but they spend most of their time “interacting” with the steep rakes and rickety staircases of Sabine Theunissen’s shabby-chic set. (It looks very much like Hal Prince’s original production of Sweeney Todd, assuming a bomb had gone off in the Uris Theatre.)

Marie’s child is, as you might guess, a bunraku puppet with a gas mask for a face, utterly unrelatable, so van den Heever’s emotional scenes fall flat and the “Hopp, hopp” finale of the work goes for absolutely nothing.

The only positive aspect of Kentridge’s soulless staging is its very lack of specificity: performers in future revivals can simply do bits they learned elsewhere. But the Met and especially Nézet-Séguin deserve better than this name-brand kitsch. 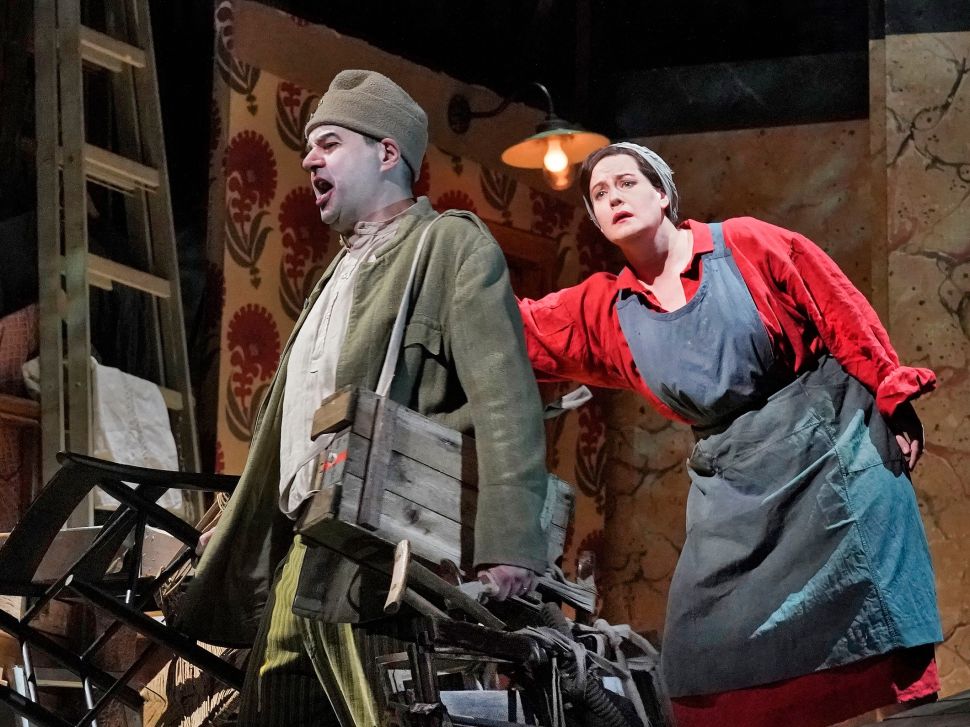