Visitors to Ad Minoliti’s new installation at Mass MoCA are welcomed into her fantastical landscape through a hexagonal portal, where a community of dancing triangles, mono-eyed squares, and sleepy trees beckon a world of impossibly indecipherable daydreams.

Born in Buenos Aires, Argentina in 1980, Minoliti trained as a painter at the National Academy of Arts P. Pueyrredón in Buenos Aires. Latin America’s rich legacy of abstraction, used as a language of resistance to authoritarian regimes, is a clear influence on the artist’s work. Like the artists who came before her, geometry in Minoliti’s work is a tool to picture utopian alternatives to rigid social norms and restrictions on identity. She combines abstraction with non-human figuration to create a world of interspecies co-habitation where birds, mice and humanoid figures mingle happily across different media.

Now based between Berlin and Buenos Aires, this is Minoliti’s first solo museum show in the United States. From January 26, MASS MoCA will present “Fantasías Modulares,” an immersive installation that combines wall and canvas paintings, video works and a three-dimensional furry.

SEE ALSO: Why Agnes Gund Is Encouraging Other Collectors to Sell or Donate Their Art

“What’s wonderful about the exhibition’s title is that it can still be easily understood by many non-Spanish speakers,” Isabel Casso, the exhibition’s curator, told Observer. “Though we are aware of the colonial legacies of the Spanish language, we decided that naming the exhibition in Spanish was a step in the right direction of having English not be the only norm in an institutional art setting.” At a time when museums have come increasingly under fire for their lack of inclusivity, MASS MoCA has had a particularly impressive record of showing Latinx and Latin American Artists, including, just this past year, solo shows of Mexican artist ERRE and Mexican-American artist Rafa Esparza.

Casso first met Minoliti when the artist was working on a series of mother-daughter paintings for the Mexico City-based gallery Agustina Ferreyra. For her upcoming solo show, Minoliti chooses a different muse, making geometric works that radically transfigure the gendered notions found in children’s storybooks.

Fairytales, with their crucial role in children’s identity formation, have long been the site of interspecies communities. Minoliti’s work mines stories like Snow White, Little Red Riding Hood and Cinderella for their depiction of human-animal relationships, but, unlike her literary predecessors, doesn’t attempt to impose hierarchies or gendered stereotypes among different beings. The age-old trope of the witch, for example, is upended in Fantasías Modulares #1, 2020, where Minoliti directs the viewer’s attention not to the witchy humanoid figure, but to its three-eyed hat.

Minoliti, who likes to think of her installations as a theater, imbues traditional modes of representation with a deliberately “feminine” aesthetic. Though playful, her objects, paintings and video works engage with serious questions about the restrictions imposed on queer bodies, particularly in Latin America. “For those that are coming fresh to these ideas, Ad’s lighthearted aesthetic presents a welcoming way in to understanding contemporary notions of sexuality and gender,” Casso said. The formal elements of her work and her deeply intentional uses of color stem from the artist’s own educational frustrations with the male-dominated canon of art history and pay homage to the feminist and queer activists that preceded her in struggles for reproductive and gay rights.

Like in Play Significant Otherness, 2015, where figures switch and share the forms that make up their bodies, formal styles are superimposed with geometric shapes in often unrecognizable configurations to offer alternative understandings of gender, sexuality and space. For Minoliti, transforming the institutional white cube becomes not just an ideological enterprise, but a literal one: visitors are guided throughout the exhibition by red, blue, and yellow curtains that, like the show’s title, nod to the artist’s interest in the modular elements of modernist design that can be moved and reconfigured.

Each colorful work is complex, but together Minoliti’s mutant creatures seem to jump from wall to canvas to video in an all-encompassing fairytale that is fluid and non-linear. Her vivid universe is welcoming to all. 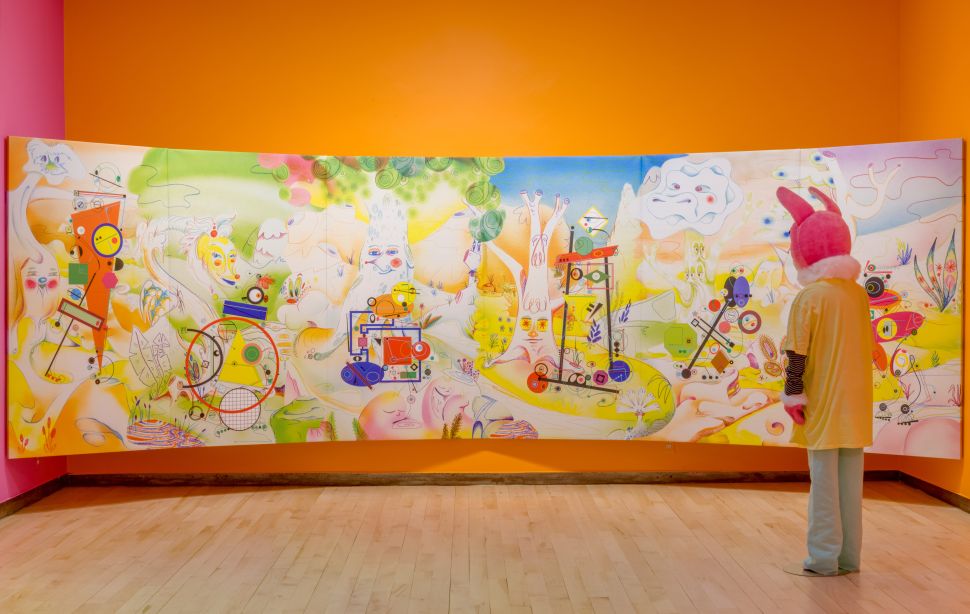