Agnes Gund, now 81, has given more than 1,000 works of art to the Museum of Modern Art, but she’s best known for selling one painting, Roy Lichtenstein’s Masterpiece, 1962, to the hedge funder Steven A. Cohen for $165 million in 2017. She took the money and devoted $100 million to found the Art for Justice Fund to address mass incarceration in the United States.

Gund’s decades of collecting and philanthropy are the through-lines of the documentary Aggie, made by another Gund, her daughter Catherine, 54. The film premieres at the Sundance Film Festival in Park City, Utah, on Friday.

SEE ALSO: Dive Into Kubrick’s Mind in an Exhibition About the Making of ‘2001: A Space Odyssey’

On camera, Gund seems reserved, except when around artists or her family. She also announces from the back seat of a car crossing Manhattan that “I hope that the film will not be seen by too many people.”

“She was notoriously camera shy, a reluctant subject,” said Catherine, who brought in a string of interlocutors—family, artists and colleagues—and the story emerges, one encounter at a time, often in front of a huge Jasper Johns painting, Map, 1963. So do the causes that her mother has supported—arts education in public schools, AIDS advocacy, the Museum of Modern Art, prison reform.

We learn about her father, a Cleveland banker. She talks of having four children in her first marriage, and then divorcing in search of a new life. That took her to the Fogg at Harvard for a Master’s Degree, then to New York, where she joined a MoMA’s Painting and Sculpture Committee in 1968 and became the museum’s president in 1990.

Agnes Gund confesses that she’s felt guilty for the privilege that she was born into, which has meant that she’s given away much of the art that she’s bought. “Guilt—that’s why so many of my things have gone to museums,” she says on camera. “Guilt is something I have not been able to get over.”

She directed some of that sentiment toward MoMA on becoming its president. “We had one black curator. It finally dawned on people that we had to do something about it,” she said.

Collecting art by women, she said, was another challenge. “Look at the Faith Ringgold problem,” she says in the film, referring to American People Series #20: Die., the large, 1967 painting of a street shoot-out by an African American woman that now hangs alongside Les Demoiselles d’Avignon by Pablo Picasso. MoMA could have acquired that work long before it did, she noted, as was the case with works by other women artists that the museum now owns.

Gund also tells Thelma Golden of the Studio Museum in Harlem that she’d like to curate an exhibition of “women’s large monumental artworks. There are so many women who are capable of doing those. I think that would be a real eye-opener.”

Given Gund’s generosity, there’s plenty of praise in Aggie, from Darren Walker of the Ford Foundation and Michael Bloomberg to the artists Catherine Opie and Xaviera Simmons. Conspicuous in his near-absence from this serial screen hug is MoMA’s director, Glenn Lowry.

The filmmaker John Waters sits down with her. Who knew that Gund helped MoMA acquire Waters’ 1972 bad-taste masterpiece Pink Flamingos? Gund is a good sport with Waters, another collector, when he asks if she frequented the Mudd Club or the Mineshaft. When she admits that she never took LSD, Waters says “your vision did not need altering.”

In the film, and in Gund’s philanthropy, thoughts in the doc return to the sale of Lichtenstein’s Masterpiece. Generous, it was also a gesture, Gund said, in the hope of getting her benefactor peers to follow suit. “When I did sell the painting, somebody who was quite close to me said, ‘what the heck did you do that for?’ It seemed such an unusual thing, and people were not all that positive about giving that money to prisoners.”

Yet donations from the sale of art did come in, to Gund’s foundation and to other projects. “It was always part of the plan—please join me, sell artworks,” said Catherine Gund.

“It really does create money where there isn’t money,” she explained.

“There are collectors who give lots of money to different issues, but there hadn’t been someone before who said, ‘Here’s $100 million that didn’t exist for criminal justice reform yesterday.’ The painting still exists in the world.”

And that approach hasn’t happened too soon for Agnes Gund, who now wants to raise funds to bring attention to climate change, a cause that she admits she’s been late in supporting.

Would she next sell the Jasper Johns in her living room that frames many of the conversations in Aggie?

“Not that picture, per se, but certainly we’re looking at things, but at a lesser price,” she told Observer.

Aggie, still seeking a distributor, makes its New York premiere at MoMA next month, and opens at Film Forum later this year. 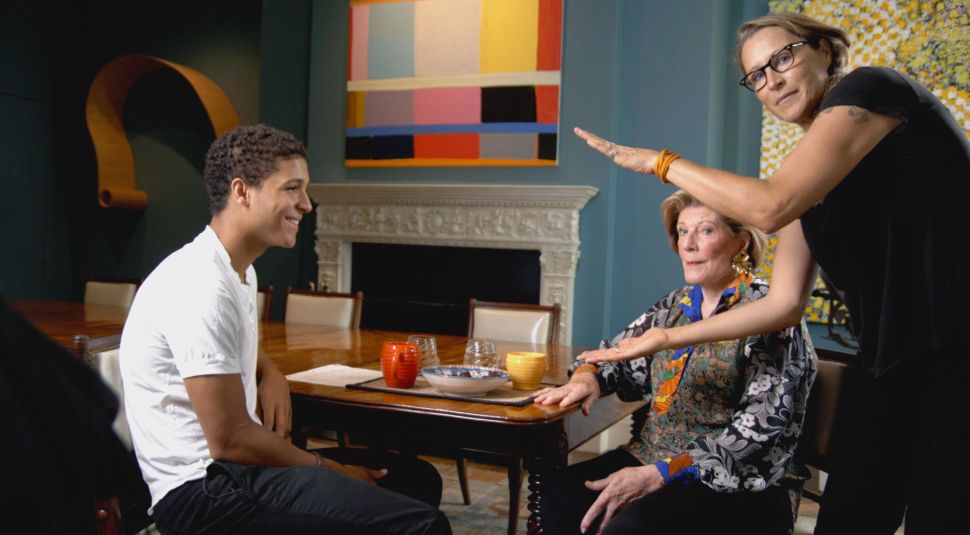