As the new decade lurches into gear, we’re left with memories of the weeks and weeks of Nutcrackers and Aileys that mark the end of every holiday season in New York. The Nutcracker never lets you down—it’s a masterpiece, and thrilling, even when the corps in the snow scene melts a little or the Waltz of the Flowers droops. There may not have been any revelatory debuts this year, but City Ballet is strong and experienced, and whether you’re seven or seventy, you’re never disappointed by a Nutcracker outing.

Things are different at the Alvin Ailey American Dance Theater. Since 30 of its 39 performances conclude with Revelations, you’re not disappointed by it either, but you’re bewildered. This company, with its magnificent dancers and unassailable confidence in itself, is still without a stable and convincing repertory. Unlike Balanchine, Alvin Ailey, the founder, left behind only a single masterpiece, plus a small group of secondary works that are viable. And over the past decades, very few new works have established themselves with any permanency. What’s an artistic director to do?

The incumbent, Robert Battle, keeps valiantly trying to turn the tide, but you can’t legislate genius into existence, and the Aileys don’t have the tried and true classics to fall back on—it’s a modern dance company not a ballet company. It’s brought in a number of the current choreographic names—Ronald K. Brown, Jessica Lang, Rennie Harris. It persists on asserting that Battle’s formidable predecessor, Judith Jamison, was a choreographer of real merit. It flirts with major talents like Paul Taylor and Twyla Tharp, but then they’re gone. It flirts with Eurotrash. It samples old-timers like Lar Lubovitch, this season with a 25-year-old piece set to Ravel’s “Bolero”—and here I had smugly assumed that I would never be asked to see another Bolero again!

And it commissions new pieces by the likes of Darrell Grand Moultrie, whose credits include “works for Beyoncé and Savion Glover” and commercials for MasterCard and Schick Razor. The new Moultrie work was called Ounce of Faith and it was very flashy, very sincere (it “reflects on the legacies that we’re all a part of and the universal journey that each person takes to find—and share—their passion”), and very long. The dancers tore into it with their customary flair, zest, energy, drive—in other words, their Aileyness. Choreographically it was a zero. Likewise, Camille A. Brown’s bland City of Rain.

Not true of Busk, a decade-old piece from Aszure Barton: her intensity and originality are always worth watching—not just the large-scale group actions but the moving little gestures, the human gestures, that catch your eye, like the hand that suddenly reaches out and touches a cheek. But her kind of dance intelligence isn’t really a fit with the Ailey go-for-broke aesthetic. Good try, though.

But—and it’s a big but—hope glimmers. One of the company’s stars, Jamar Roberts, has begun to make dances, and he’s been named the company’s (first) resident choreographer. A couple of years ago he made an effective piece called Members Don’t Get Weary, and this season there was a lovely work—Ode—to an effective jazz score by Don Pullen. Six men (or, alternately, six women) remember and mourn the death of a victim of gun violence, but—rare these days—there’s no sense of an agenda in Ode. What interests Jamar Roberts is dance. He seems to be developing a quiet yet stirring vocabulary, and he’s responsive to the specific qualities of his dancers. It’s unfair to burden so new a choreographer with too much expectation, but when you’re drowning, it’s human nature to grasp at straws. And Roberts is far from being a straw.

The all-female Ode was strengthened by the presence of Jacqueline Green in the central role—tall, strong, commanding yet modest, she has emerged as the company’s star. You can’t keep your eyes off her, and you find yourself speculating on how she can expand her range. Martha Graham, perhaps? After all, Graham was an important influence on Ailey—and a creator of great roles for women. I can dream, can’t I? 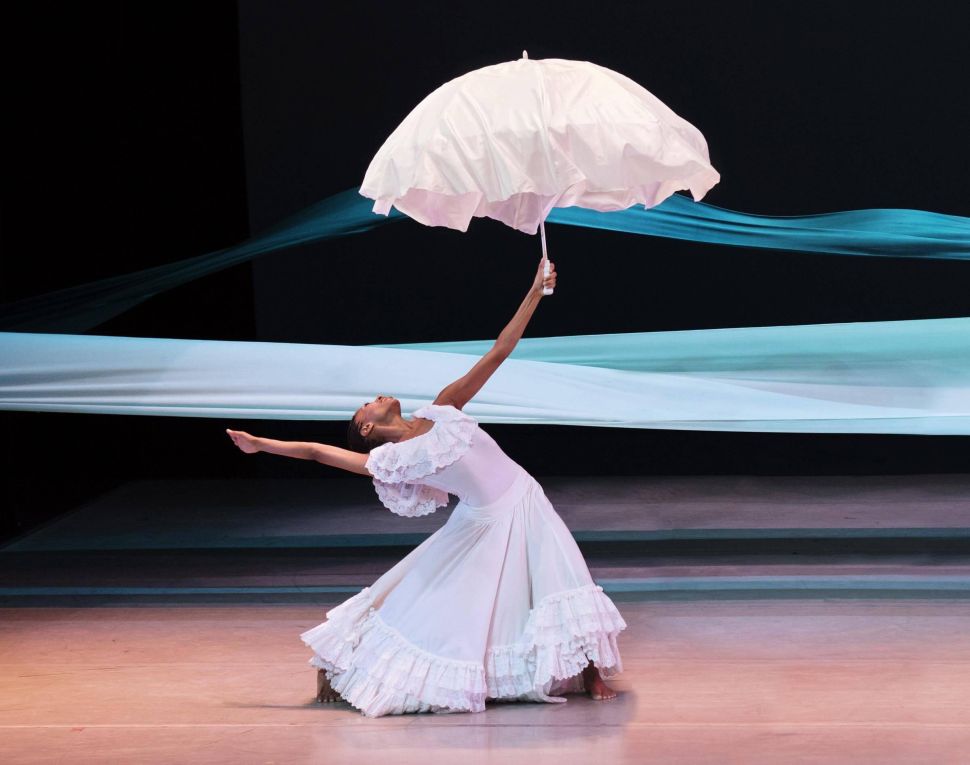