It must be more than a strange coincidence that the world’s richest Americans share a special love for India (or the other way around). In the last 24 hours, Amazon CEO Jeff Bezos has been on an Instagram storm, broadcasting his three-day visit to India. So far, he has paid tribute to Mahatma Gandhi at a memorial in New Delhi, visited a local school, where he learned how to fly a kite, and spoke at an Amazon event after which he posted an Instagram video with the hashtag “#IndianCentury.”

On Wednesday, Bezos announced at the aforementioned event that Amazon plans to invest $1 billion in Indian small businesses over the next five years.

The investment is part of Amazon’s bigger strategy to conquer India’s e-commerce sector, a market estimated to reach $200 billion by 2027. Bezos said the $1 billion capital infusion will help bring more than 10 million local businesses online and help the country export $10 billion worth of goods by 2025.

More importantly, Bezos hopes that the move will give Amazon a competitive edge over its largest homegrown rival in India, Flipkart, which Amazon once wanted to acquire but lost to Walmart in 2018.

Bezos’ courting of the South Asian country was largely unrequited, however. On Wednesday, the Confederation of All India Traders, a trade union representing 70 million brick-and-mortar retailers, said it has planned protests against Amazon in 300 cities across the country.

“Bezos and Amazon have already destroyed many small businesses and are now trying to build a false narrative of empowering small retailers,” Praveen Khandelwal, secretary general of the trade union, told Bloomberg on Monday ahead of Bezos’ arrival.

Last year, India updated its e-commerce rules to forbid online retailers from holding stakes in sellers or forging exclusive arrangements with brands. Although both Amazon and Flipkart restructured their local operations following the rule change, a trade group filed a complaint with the Competition Commission of India, alleging that some of the two companies’ preferred sellers were partly or wholly controlled by the e-commerce giants themselves.

Both Amazon and Flipkart have said they are compliant with laws and welcome the government investigation.

Any day is a good day when you get to fly a kite. #ThankYouIndia 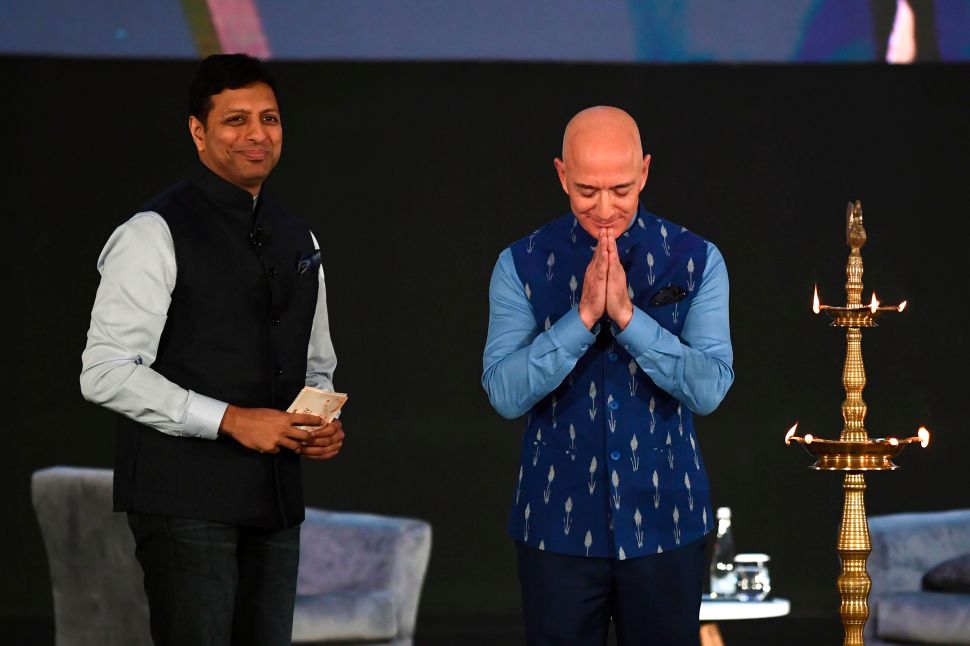