On Thursday, local New York Twitter was set aflame by the digital release of a poster illustrating Andrew Cuomo’s 2020 agenda, which the governor had debuted on Wednesday evening at the annual State of the State address reception. Rather than elucidate a clear set of steps Cuomo is looking to take in the new year, the poster (which was conceived by the governor himself and created by his frequent collaborator, Brooklyn artist Rusty Zimmerman) instead disorients the viewer by presenting an overwhelming scene: a sailing ship, representing the state, afloat in a roiling sea and surrounded by menacing creatures of the deep. Each sea-dweller comes with its own label—”Government Incompetence” takes the form of a perturbed-looking squid, the cheerleader of “Intolerance” is an octopus and the ship appears dangerously close to running afoul of “the Reefs of Greed.”

Zimmerman, who’s worked with the governor before on other visual projects, told Gothamist that the idea for the poster came to Cuomo in the middle of the night, when he woke up and suddenly remembered a poster that had been made for the former United States Secretary of State William Jennings Bryan in 1900. Seeking to emulate the original artwork’s octopus imagery, Cuomo then tasked Zimmerman with translating his ideas into nautical visuals.

“He’ll render me a picture of a ship at sea, and within the sea of, you know, division with winds of anger, anxiety etc., are representation of things that New York is sailing steadfastly through,” Zimmerman explained to Gothamist. “Some of those things that he’d like acknowledged are anger and bigotry and ethnocentrism, and from there it’s on me to look at the William Jennings Bryan poster and say, ‘How would these things be represented in a nautical image from 120 years ago.’ There were about 30 different iterations that went from start to finish, each step refining and adding and subtracting some things.”

There are irrefutably a great deal of “things” that remained in the poster after the culling process. One of the most striking elements of the poster is the rock face in the background, which has been hewn into a series of escalating steps labeled “The Steps to Progress.” Upon each of the steps is a visual representation of a different issue, like “Marriage equality,” “Gun safety” and “Infrastructure.” “The 10 steps are there because he’s entering his 10th year, and these are the things we had to do over the years to take steps towards justice,” Richard Azzopardi, senior advisor to Governor Cuomo, told Observer on Friday. “The foundation of the steps is the physical things we’ve done; the new terminal of Laguardia and the Koscuiuszko Bridge, the first bridge in New York City that’s been built in decades.”

Right under a rendering of the Governor’s face, a rainbow labeled “The arc of the moral universe” and “Building belief in progressive government with results” floats gracefully above everything else.

“The key to the poster is the rainbow on the top, which is the arc that bends towards justice,” Azzopardi continued, referencing the famous quote by Martin Luther King Jr. “In all these areas we’re going towards justice, and the ship of state is where we are right now. The waters around us is where New York is.” 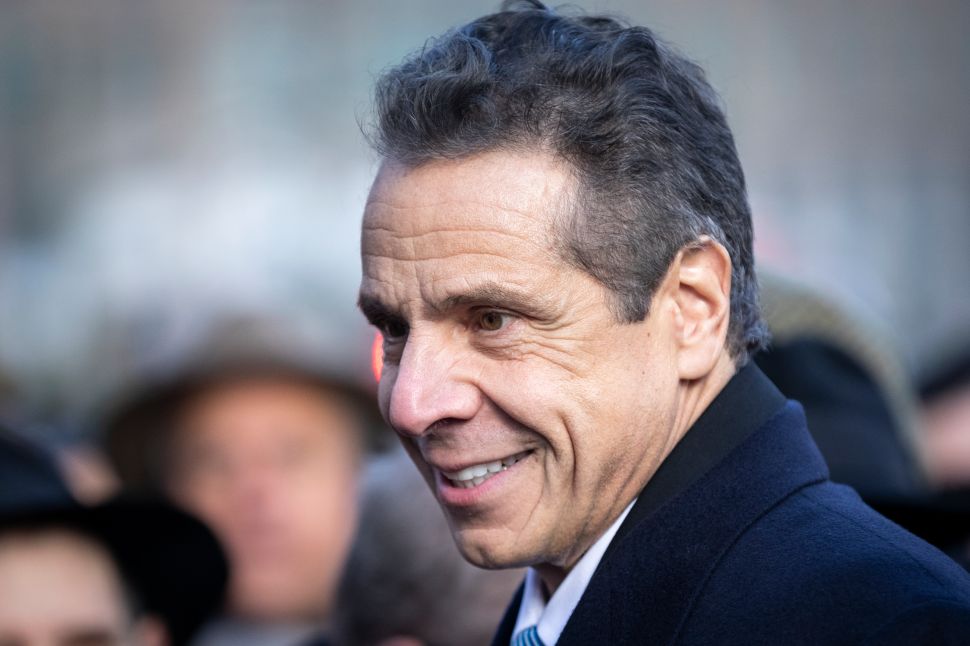