It’s still far too early to know exactly what caused a Ukrainian passenger jet to crash six minutes after takeoff from Tehran early Wednesday, killing all 176 people on board, but there are already consequences.

As The New York Times reported, airline crash investigations can take a year or more in the best of circumstances—and this is not that. The crash occurred during a state of near-war between the United States and Iran, as well as an extremely rough period for Boeing, manufacturer of the Ukraine International Airlines Boeing 737-800 (which, it must be emphasized early, is related to but is not the 737 Max, which is grounded and will require significant investment to fly again).

In an absence of answers, for now, the disaster will be all things for all people: a regrettable and so-far inexplicable accident, or a clear sign of aggression—a theory flatly denied by Iranian officials (and who benefits from downing a passenger jet in these circumstances is far from clear). Either way, it’s more potential bad news for embattled Boeing, which won’t be able to participate directly in the investigation—now undertaken by experts, as well as amateur sleuths across the world “thanks” to social media.

#Breaking #NewsMap
I finally found the exact location of the #PS752 crash site.
The Boeing traveled more than 20 kilometres after @flightradar24 lost its track over Parand and crashed in the town of Khalaj Abad.#Iran pic.twitter.com/7ILNhGzWv6

CNN: US intelligence is “taking a look at the crash” of the Ukrainian jet last as suspicions rise about what could have caused a Boeing jet to crash near the Tehran airport shortly after takeoff.

Authorities in Iran, from where missiles were fired towards U.S. and Iraqi military targets in Iraq four hours prior, said “technical failure following a fire” brought down the plane in a field.

The possibility of some kind of technical malfunction seemed bolstered by a later analysis, supported by video evidence, that suggested the plane had turned back around toward the Tehran airport when it caught fire, continued to maintain altitude, and then, exploded, rather than hitting the ground intact.

For their part, Ukrainian officials backed away from an earlier statement attributing the disaster to engine failure, declaring all possibilities open—except for pilot error on the part of the highly experienced crew.

Two videos we verified of the crash – including this posted early on by an Iranian journalist – confirm #PS752 was ablaze, kept some altitude, before exploding and downing fast. Debris and remains spread over large area. @trbrtc geolocated a 2nd video. https://t.co/1XsjWjVkvq

Eighty-two the victims were Iranian citizens and 63 were Canadian citizens, according to The Financial Times, quoting Ukraine’s foreign minister. There are significant numbers of both Ukrainians and Iranians in Canada, the paper noted—which raises a salient question: If it was a missile, as questionable Twitter accounts are claiming, why would Iranian forces want to murder their own people? (What “false flag” attacks there are in reality generally aren’t self-inflicted wounds.)

Russia is an Iranian ally; it’s also very hard to conceive of a situation in which either the U.S. or Israel would have strategic interest in an attack, let alone be able to position weapons inside Iranian territory near an airport.

For these reasons, and statistics, some terrible accident would appear to be more likely, though solid answers will only be found in the wreckage—in both the “black boxes” recording flight data and cockpit chatter, as well in the remnants of the plane and the remains of the victims.

As much as 80% of fatal commercial airline disasters occur during either takeoff or landing—however, according to a Boeing analysis, 48% of all fatal crashes occurred during the final approach and landing. (At the same time, there’s some precedent in recent history for fatal or near-fatal takeoffs: American Airlines Flight 587 crashed in Rockaway, Queens, after takeoff from JFK, killing all on board; US Airways Flight 1549, the setting for the “Miracle on the Hudson,” managed to ditch in the Hudson River after it struck a flock of Canadian geese two minutes after takeoff from LaGuardia Airport.) Takeoff and initial climb, which comprise about 2% of flight time and are the stages in which something went wrong here, account for 14% of accidents.

For now, owing to tensions between the United States and Iran, neither Boeing nor American investigators will have access to the black boxes, though Ukrainian officials may participate, as per most recent media reports.

If the craft was brought down by a missile, evidence attesting to the fact will be very obvious and extremely hard to hide—so long as scrupulous investigators are granted access to the debris and to the victims.

The disaster drew comparisons to Malaysia Airlines flight MH17, a passenger jet shot down over eastern Ukraine in July 2014. Investigators believe a surface-to-air missile provided by Russian to pro-Russian separatists shot down the plane and murdered 298 passengers and crew—in no small part because investigators recovered both paint and shrapnel fragments from a missile in the wreckage, and also determined beyond doubt that only a missile could have created the explosion that brought down the plane in-flight, one of the least likely times for a crash. (Images circulating on Twitter, purporting to show tail sections of a common surface-to-air missile, are untrustworthy at best.)

Boeing, so far, has remained near-silent on the disaster, but at least some investors seem to be reacting.

Stock in Boeing was trading at $331.37 a share at markets’ close on Tuesday, before briefly tumbling to just above $300 a share in after-hours trading—roughly the same position where the stock had pitted in December 2018, when the company and the Federal Aviation Administration (FAA) first reported that the 737 Max’s steering system posed an “unacceptable safety risk.”

That’s a significant dip from its 2019 high of $440.62, a peak Boeing stock hit in March, after 737 Max craft were grounded, but Wednesday’s nadir still represents a significant long-term gain for Boeing investors who held the stock in 2016, when it was trading in the low $100s.

Markets are people, and people are not rational—and there will be many questionable actors using the crash to push various hobbyhorses.

The human cost of today's Boeing crash in Tehran in a single picture, in @nytimes report of the event. https://t.co/4jwgyzBbY8 pic.twitter.com/KOon2LhIVj 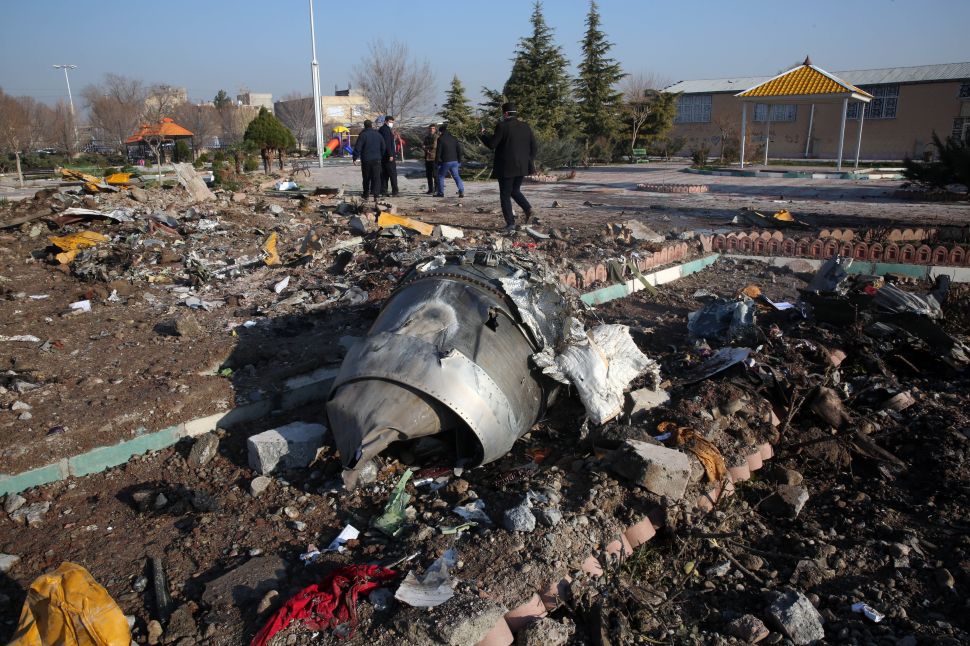