Boy George, the singer-songwriter and visual artist best known as the lead singer of the ’80s pop band Culture Club, debuted a new work of art on behalf of the organization Project Zero on Wednesday. The work was created in order to raise funds for the preservation of the ocean. The piece, called Punks Against Pollution, was also made into an enormous billboard and erected on London’s Carnaby Street. It features scowling beachgoers semi-enjoying their day while surrounded by frolicking creatures. In the background of the piece, George has given the shining sun a dissatisfied frown.

The billboard bearing the work of art, which is 84.5 meters long and 11.55 meters high, is one of several artworks that have been created on behalf of Project Zero for a multi-artist awareness-raising project. The art will eventually be auctioned on Paddle8, and proceeds will go towards the Zoological Society of London and the Thames Conservation Project. Artists Mr. Brainwash, Bradley Theodore, Henry Hudson and Zaria Forman also made pieces addressing how worsening environmental factors have had a negative effect on the ocean. Their work is currently on display in a Project Zero gallery show that will run until January 31, and George’s billboard in particular will remain on display until spring. “Nature is so complex,” George said in a statement. “It gives us so much and some of the best punks live in the ocean!”

George has made forays into the visual art world before, but this project is almost certainly the biggest platform he’s yet been given for his non-musical artistic creations. In 2016, a sketch made by George sold for $18,944 at an auction for the Gloucestershire charity Longfield, surprising spectators who hadn’t expected work made by pop star to outsell work by the British sculptor Anthony Gormley. Only a few years later, genre crossover is becoming more and more of an accepted idea, and artists of every stripe are proving they they have abilities and passions that don’t necessarily align with what they became famous for. 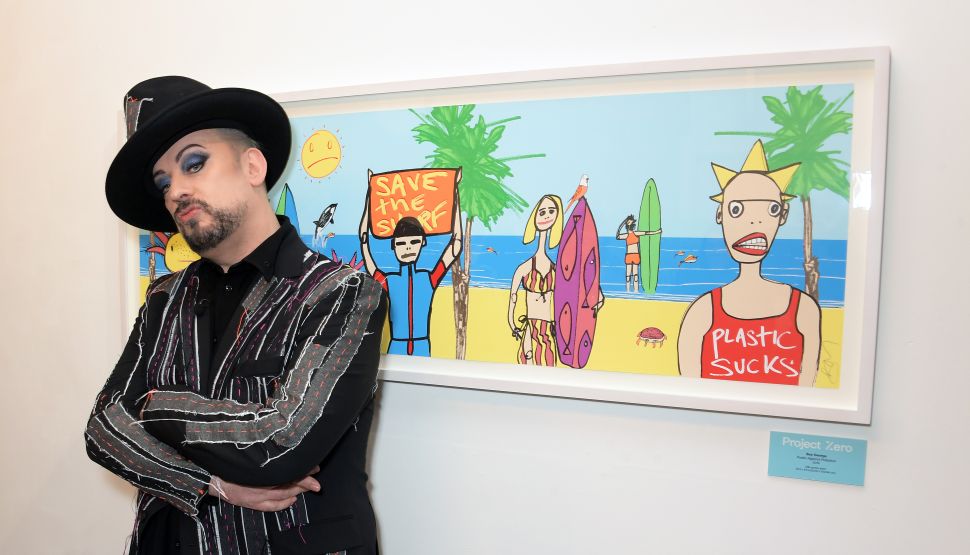