We knew this annoying day was coming. It’s my worst nightmare. Imagine being 35,000 feet in the air, stuck in a middle seat, on a flight from New York to Los Angeles—and the person on either side of you spends the entire journey loudly babbling on his or her cell phone.

Three hours into the journey, it would make me want to gouge my ears out with a fork.

Well, that day is almost here. At least the technology to support mile-high cell phone calls now exists. According to CNN, we might be only a year or two away from implementing the most annoying thing known to humanity, since the advent of fingernails against a chalkboard.

You know how a crying baby situated directly behind you can make you want to pull your eyebrows out? Well, loud cell phone conversations will take us to a new level of in-flight exasperation. Imagine, we will now loudly learn a lot more about people we’d rather know absolutely nothing about through one-sided phone calls.

Scientists stated in a report in the journal PLOS ONE, that one-sided cell phone conversations are more distracting than overhearing a conversation between two people. Put into the mix also being packed in like a sardine in an enclosed, claustrophobic space with limited legroom. That’s a recipe for voluntary manslaughter.

Here are a few new scenarios that air flight will now offer:

So, how does it work?

We used to be told to switch our phones off during takeoff and landing. There were safety reasons attached to it. Now, no one does it. I guess that safety issue has been resolved. And it has for newer cell phones. Previously, some devices had the potential to interfere with the cockpit equipment and thus affect the operation of the plane. Now, phones operate at much higher frequencies. Planes are also designed not to be affected by the amount of passengers’ electronics devices. Thus, there’s no longer a technical reason for people to not use cell phones on planes—the only real reason is to keep sanity intact.

Still, the Federal Communications Commission (FCC), the agency that oversees U.S. telecommunications, prohibits the use of two major cellular bands while airborne.

But there’s ways around that…

It’s now become commonplace for flights to offer Wi-Fi service, which has the bandwidth to support voice over the internet (VOIP). If internet is available, then so are WhatsApp calls. Several international airlines, British Airways, Emirates and Etihad, already allow voice calls on certain routes.

According to Don Buchman of Viasat, a communication company based in Carlsbad, California, “Most airlines have the ability to permit devices to make voice calls but choose not to,” he told CNN. “When the industry is ready, it probably will be as simple as flipping a switch.”

I’m sure a lot of crappy airlines, such as Frontier or Spirit, would already have cell phone usage on their planes, if they could find a way to capitalize on it—like they do everything else on their miserable flights.

A lot of experts weigh in on the “cons” of flipping that switch and allowing passengers to talk on cell phones during flights, using words such as “horrendous” and “cacophony of chaos” to describe that proposed scenario.

To put it simply, the main reason we currently don’t have in-flight cell phone calls is that it would cause “craziness.” Flight attendants would simply lose their minds having to manage conflicts between passengers. I’m sure we would see a dramatic rise in in-flight fist fights due to passengers loudly talking on their cell phones.

In an extreme understatement, Taylor Garland, spokesperson for the Association of Flight Attendants, told CNN, “We are strongly against voice calls on planes,” adding, via email, in all caps: “NO CELL PHONES.”

Thank you, Taylor, for summing up the sentiments of any sane person who has ever stepped foot aboard an aircraft. Yes, hell is other people—loudly talking on their cell phones. 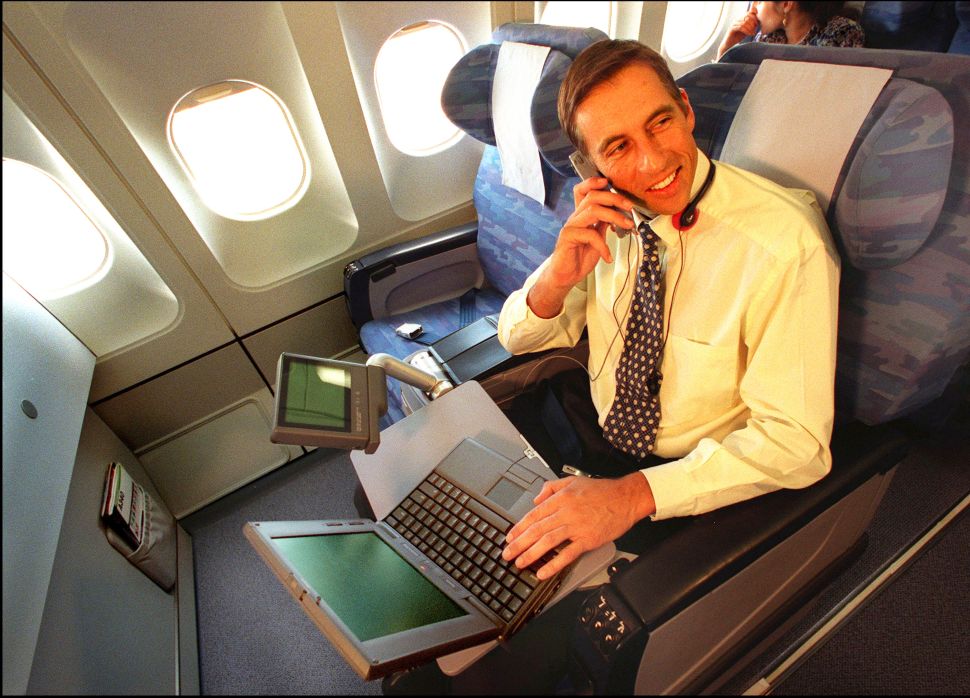