It doesn’t seem that long ago that feminists were fighting over who got to bear the feminist mantle. Back in the ‘90s, we debated whether Lisa Yuskavage’s soft-core figurative paintings critiqued misogyny, and the so-called radicality of women artists in Marsha Tucker’s 1994 New Museum show “Bad Girls.” The root question in many of these controversies: does female appropriation and subversion of male fantasy constitute actual agency?

More than twenty years later, women exploring female sexuality are reframing that question altogether. Two shows in Chelsea exhibit the exhilarating results of that work, through two totally different methods. Jessica Stoller’s “Spread” at PPOW uses fine porcelain to flaunt as treasure what women have been told to hide—their body, their age and their sexuality. Just one block away, Katarina Riesing’s painting show, “Razor Burn,” at Asya Geisberg employs repeating v-shapes within her close-ups of the female body to evoke voyeuristic unease. Both exhibitions demonstrate that now more than ever, women, not men, are defining the terms of their art and how it will be viewed.

The female perspective might be most aggressively articulated at PPOW where Stoller combines traditionally women-centered craft mediums with fine china. Spread sparsely across the exhibition space, her porcelain figurines and vessels formed as delicately rendered bums, breasts and skin are topped off with flourishes of flora and fauna. The show’s centerpiece, Bloom, presents a full garden of elements from the natural world that allude to female genitalia, birthed from between a woman’s legs. In the center, a platter sits above all else, as if to indicate a gift to the gods.

A full lifecycle spins out from this piece. A series of wall-mounted nipples, some adorned with hair resembling branches, speak to the nurturing aspect of womanhood; nearby, a vessel in which a bum gently parts vaginally shaped lace alludes to sex and birth. Death is never out of sight; a ceramic quilting hoop frames aged skin that’s been quilted and uses flies as fasteners.

That sounds pretty gross, but nearly every piece in the show manages to transform taboo into trophy. That’s not to say it doesn’t disturb. Untitled (Harpy), a vessel with claw feet and a woman’s torso uses snake tentacles to throw pigs, goats and babies, into its basket shaped mouth. This piece, perhaps more than any other, falls into the Yuskavage-type debate over appropriating a male-centered vision for its negative depiction of women as half-human monsters. But that doesn’t bother me, for the same reason that the debate over Yuskavage’s paintings seemed pointless—art that ignores other genders tends to be boring.

Stoller is not boring, and neither is the work of Riesing, who finds a way to allude to the vagina in nearly all the paintings and drawings on view. Her bodies, rendered close-up and adorned with sheer fabrics, play with positive and negative space. A v-shaped opening on a t-shirt suggests a port, whereas the almond-shaped pantie liner on a pair of stockings poses a barrier to entry. Together, they refer to the real world, which welcomes the labor and sex of women, but provides few opportunities for advancement.

In the hands of Riesing, the female body lights up when touched. Reddish bits of skin around the legs and crotch almost glow and a delicately painted white ribbed shirt seems to pop off the heaving chest of a sitter. In some works, particularly those where the sitter presses her legs together and hands slide over limbs to spread them apart, the sexual tension feels near palpable. In others, the red turns to rash, and revulsion takes over. Riesing’s models are never reduced to merely bodies (they have desires and needs) though they can be reduced to form. One painting consists only of a series of legs that successively spread less and less apart. Like everything else, it resembles a vagina, only this one offers a close-up perspective.

Though playful, it might be the one work I could do without. While I appreciate the desire to offer a completist vision of the crotch shape, we’re already in vagina city. It’s the only piece where I felt the purpose of the painting was to lead me somewhere I’d already been, rather than someplace new.

No show contains perfectly consistent work, though, especially those that challenge the viewers by throwing out bouts of the strangely palatable abject. We may be past the days when works by Stoller or Riesing will generate controversy, but they’re not any less daring for it. In the era of #metoo, the battlegrounds have shifted, but women are finding more agency than ever by defining sexual identity from inside the gallery. 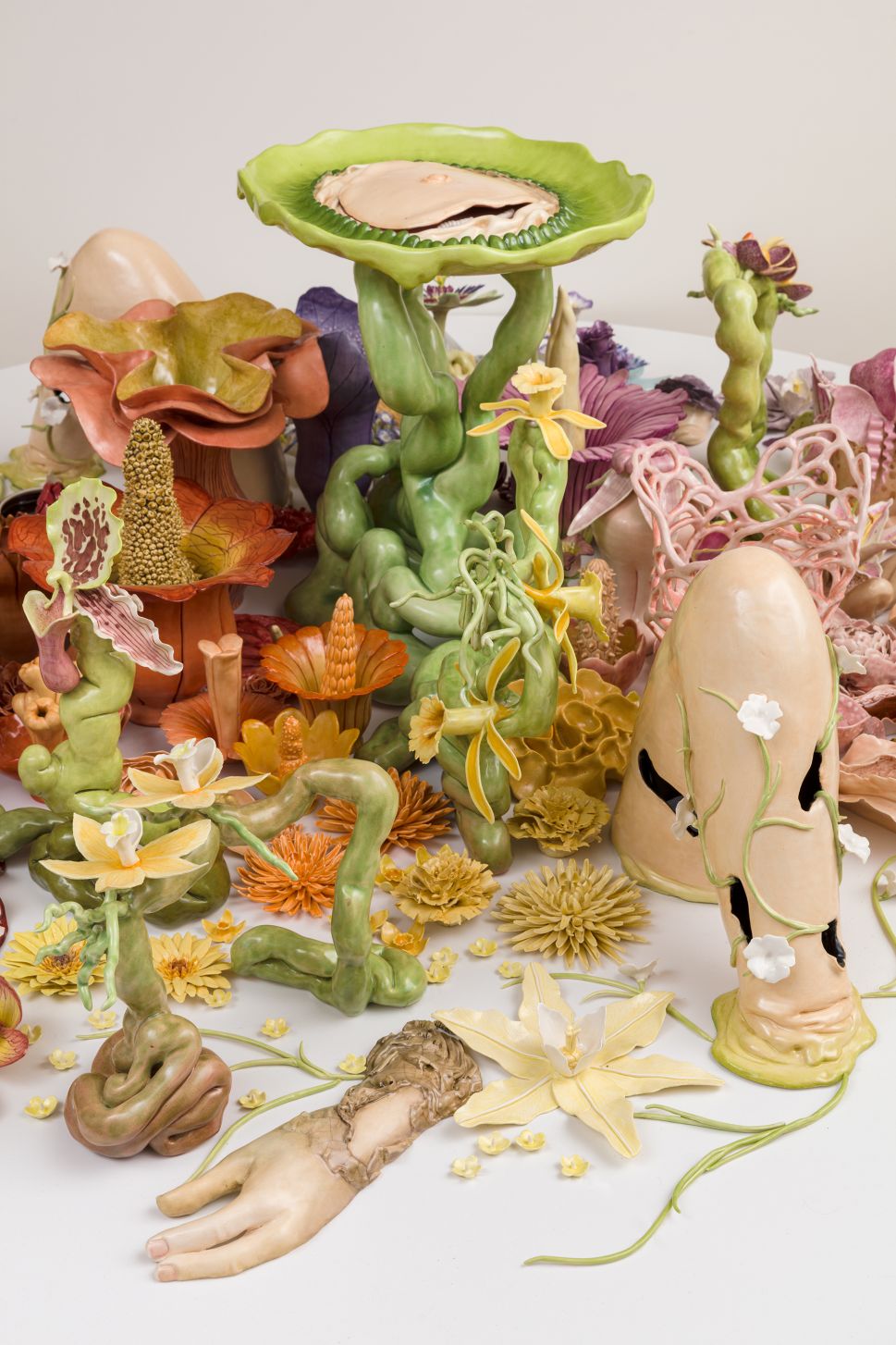