Based on a short story by science-fiction guru H.P. Lovecraft, Color Out of Space is about what happens after a meteorite lands in the front yard belonging to a New England family, the Gardners. It’s not much of a story, so understandably, it’s not much of a movie, either. But for shock effects, the aliens that descend upon the Gardners are admirably grotesque and some of the special effects are admittedly hair-raising.

The rock has barely hit the ground when a mutant organism from outer space infects their minds and bodies, transforming the peaceful rural lives of the Gardners into a horrible nightmare. Patriarch Nathan Gardner (Nicolas Cage) already has enough trouble without an invasion of monsters. His wife Theresa (Joely Richardson) has cancer and is trying to recover from her latest round of surgeries, but there’s no peace in a house full of flesh-eating E.T.’s. Teenage daughter Lavinia (Madeleine Arthur) spends her time practicing witchcraft and thinking up ways to flee the monotony of country life. Her brother Benny (Brendan Meyer) escapes any brush with reality by staying stoned. Little brother Jack (Julian Hilliard) simply goes catatonic. The mother is already dying, but after hell breaks out, everything turns malignant. Theresa chops her fingers off with a butcher knife. Sam the family dog turns vicious. Blood pours from all the faucets, and woe to anyone who drinks the .

As the terror escalates, so does Nicolas Cage’s delirium. Times shift on all the clocks. Morning becomes night, night turns into day. Purple mists envelop the atmosphere in a fog the color of a grape popsicle. Prize fruits and veggies from the garden turn rotten. Everyone’s skin grows gnarled and wrinkled as tree bark. In the new magnetic field that surrounds the house, radiation poisoning takes over, cell phones go dead, the car won’t start, and each member of the Gardner family disintegrates, both mentally and physiologically. Cage, in one of the increasingly lunatic midnight-madness performances that have become his trademark, chews so much scenery the danger of asbestos poisoning becomes worrisome.

With only a thread of a plot, South African director Richard Stanley, who co-wrote the minimalistic screenplay with Scarlett Amaris, relies on surreal visuals to keep the movie on its feet, drowning the screen in psychedelic colors, some of which are so unusual they can’t be found in a box of Crayolas. There’s nothing to think about here, but a lot to describe. It’s a Lovecraft story that has surfaced in several adaptations before; the Boris Karloff version in 1965 remains my favorite. Funniest line: “What touched this place cannot be quantified or understood by human science. It was just a color out of space.” Well, that’s one way to write it off. 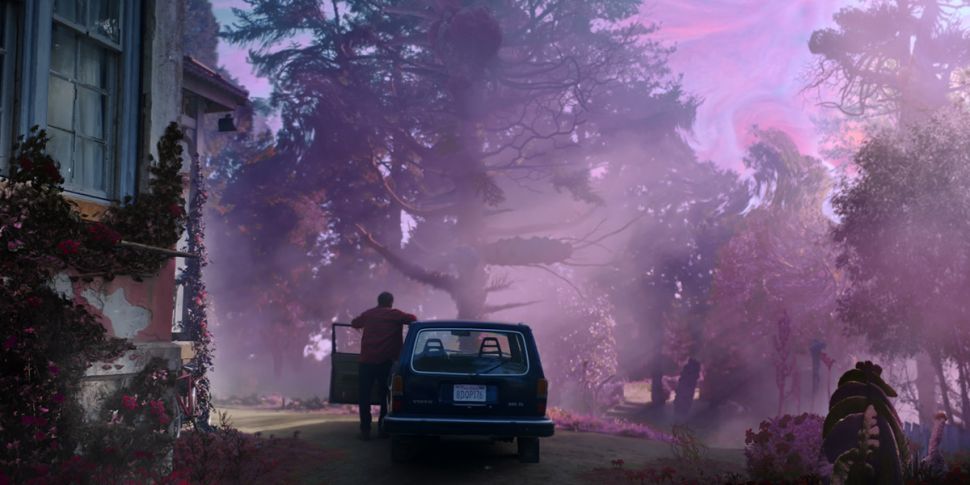