Andy Warhol was never without his 35mm camera during the last decade of his life, consuming, on average, a roll of film each day. Barely any of the 130,000 exposures he created this way were ever seen outside his studio, though; they lingered unseen on 3,600 contact sheets. Likewise, when photographer Robert Frank was working on his iconic book, The Americans (1958), he shot 27,000 frames and ultimately published only 83—leaving the rest in a gridded sequence of outtakes on his contact sheets. And Irving Penn, the fabled Vogue photographer, often used up to ten rolls of film to get a single portrait for the magazine.

Like Instagram influencers who only post seemingly effortless picture-perfect shots, mid-20th century photographers rarely exposed their blooper reels, also known as contact sheets. Contact sheets were a photographer’s working tool—prints of all the negatives from a roll of film arranged on a single sheet of 8-by-10-inch photographic paper, and used to pick which frames to enlarge.

SEE ALSO: Over 200 Artifacts From Saharan Empires Will Go on View at the Met

The late photographer and collector Mark Schwartz adored these telltale castoffs, and collected them almost exclusively towards the end of his life. Part of his thumbnail-sized collection is now being exhibited at the Cleveland Museum of Art as “PROOF: Photography in the Era of the Contact Sheet,” opening February 7.

Contact sheets aren’t about the cover shot, they’re about process. “A dozen contact sheets tell far more about a photographer than a dozen ‘good’ pictures taken by that same photographer,” American shutterbug Elliott Erwitt once said. Like a photographic version of the painter’s preparatory sketch, these sheets are a peek at a photographer’s hunt for that great image, instead of the cropped and color-corrected final product.

“PROOF” spans the 1940s to 1990s—the period when contact sheets were most commonly used. This format couldn’t technically be produced before 1900 (when negatives were the same size as their resulting prints), but the invention of small negatives on rolls of film allowed photographers to fit an entire reel on one light-sensitive page. All 36 frames from a roll of 35mm film fit onto an 8-by-10-inch sheet of photographic paper; so did the 12 frames from a reel of 120 film.

These sheets were usually tucked in darkroom drawers, not meant to be seen by anyone outside a photographer’s studio. “Contact sheets should be as private as a toothbrush and ought to be guarded as jealously as a mistress,” Erwitt also said.

It was a unique challenge, then, for Schwartz to collect them. Not considered standalone works of art, contact sheets aren’t usually sold by galleries or photographers.

“It takes a certain kind of tenaciousness,” Schwartz’s widow, Bettina Katz, told Observer. “He wanted them and nobody else really seemed to. There was this whole inventory out there, but it’s not like they were out on the marketplace. He had to work hard to get them.”

When asked where he was able to find them, Katz answered, “It wasn’t at the major galleries—he was on eBay!”

Schwartz’s persistence ultimately brought together (among many others) Richard Avedon contact sheets of an elderly Groucho Marx, a staged sequence of the Beatles having a pillow fight shot by Harry Benson, a series of Diane Arbus frames showing eerily identical sets of twin sisters, and an Arnold Newman set of studio portraits of Piet Mondrian (shown aptly, for the geometric painter, in a grid). When viewed as a whole, the contact sheets tell a greater story than the sum of their parts.

“Mostly, they were just a working document. The difference is that Mark really saw [the contact sheet] as an art object in and of itself,” Katz adds. “There was zero interest in it when Mark started collecting. It is a really particular thing to collect.”

Contact sheets may still be tough to acquire, but interest is growing in this now-obsolete photographic format. The first book of film industry contact sheets was published a few years ago, Hollywood Frame by Frame (Princeton Architectural Press, 2014), followed by a book of contact sheets from 69 photographers in the now sold-out book, Magnum Contact Sheets (Thames and Hudson, 2017). More exhibitions, like “Contact Warhol” at Stanford’s Cantor Arts Center (2018) and “PROOF,” give the contact sheet a close-up.

“While the contact sheets are not in themselves works of art, they can tell us a lot about the artist’s way of working,” writes Peter Galassi, former photography curator at New York’s Museum of Modern Art, in the “PROOF” exhibition catalog. “Contact sheets teach us about photography as well as the photographer.” 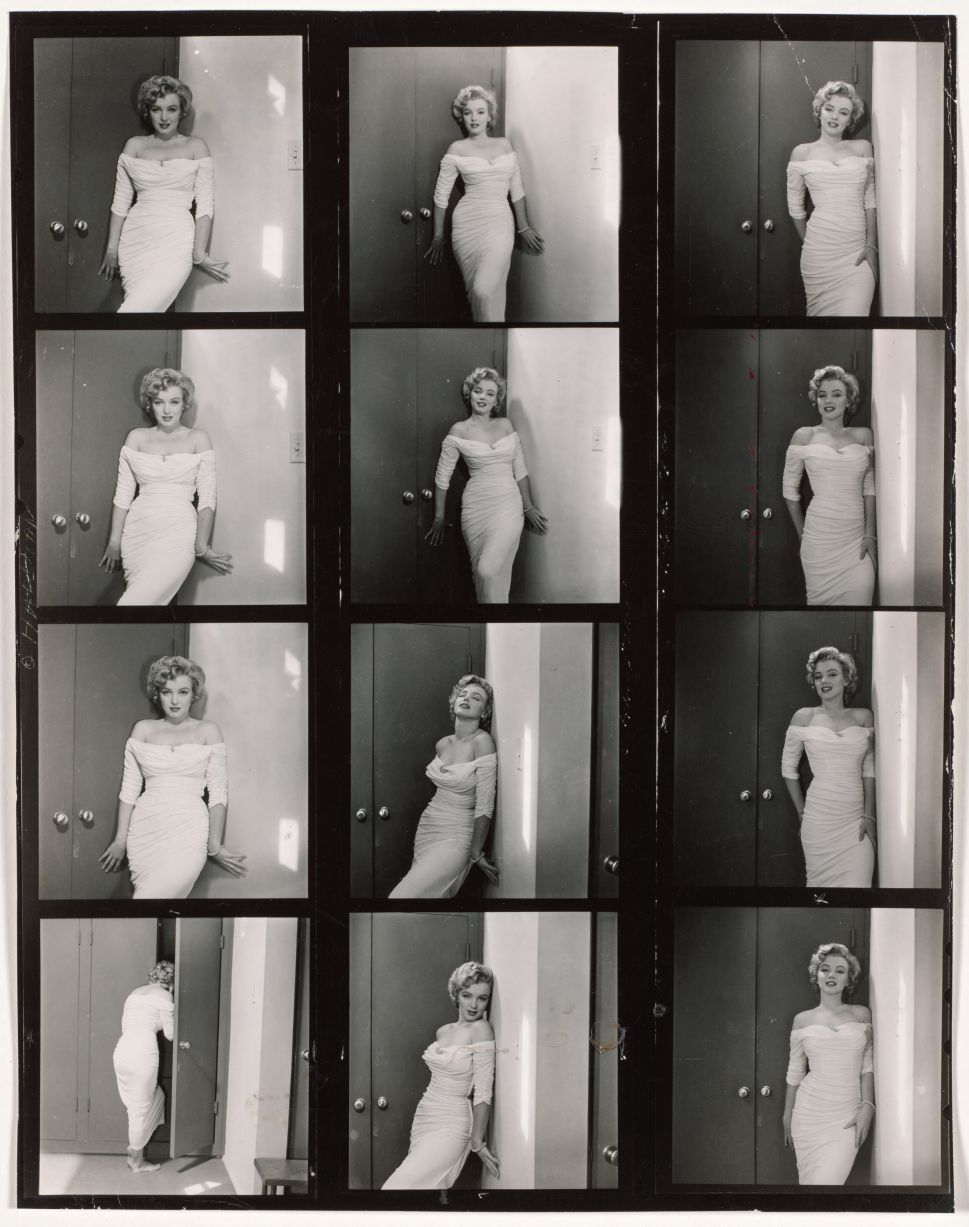