Over the weekend, the outbreak of a new and virulent strain of coronavirus, which has killed more than 100 people in China and infected more than 4,500 across the world since its discovery in the central Chinese city of Wuhan, arrived in the United States.

At least five cases of individuals sickened with the “2019 novel coronavirus” have been confirmed in the country, with two in Southern California and one each in Illinois, Washington and Arizona. Health officials in Canada announced on Tuesday that a British Columbia man in his 40s who regularly travels to China also has the disease. Another 110 people in 26 states “could” be infected and are “under investigation,” the Centers for Disease Control and Prevention (CDC) said. Meanwhile, the first known cases of human-to-human transmission have been documented in Germany and Japan.

And as pictures of empty streets in China and elected officials holding press conferences in facemasks circulate, the virus seems to have spread very far, very quickly. Confirmed cases of the disease nearly doubled overnight from Monday to Tuesday, from 2,800 to 4,500, and there could soon be many more. A plane carrying 240 American citizens out of Wuhan—diplomats stationed at the U.S. Consulate there along with their families—is scheduled to land at Ontario International Airport in Southern California.

Earlier plans to have that plane enter the United States in San Francisco, a more heavily populated city (and, just putting this out here, one of the settings for Contagion), were scrapped because, well, people are freaked out about the coronavirus, which has infected people in areas as far removed from Wuhan as Germany.

“This is a serious public health threat,” the CDC’s website warned. “The fact that this virus has caused severe illness and sustained person-to-person spread in China is concerning, but it’s unclear how the situation in the United States will unfold at this time.”

So: Should you be freaked out? Probably not, unless you travel to central China, or know someone who has, or have a compromised immune system. Even then, it’s probably wise not to panic.

Officials in San Bernardino County, where Ontario is located, stress that passengers from Wuhan will be screened for the disease in Alaska, where their plane is stopping for refueling before it flies to Ontario, where they’ll be screened a second time. Anyone showing signs of the disease will be quarantined—and, as Dr. Nancy Messonnier, director of the CDC’s National Center for Immunization and Respiratory Diseases told the Los Angeles Times on Monday, the virus is “not spreading in the community” and the risk for most Americans is low.

What Is the Coronavirus?

As the Centers for Disease Control and Prevention and the World Health Organization both note, coronaviruses are a very large and very common “family” of viruses (if “beings” that are just strands of genetic code encased in protein can be called “beings”—really, do lose some of your workday reading about viruses). Most coronaviruses cause mild to moderate illnesses in humans, like the common cold; some recently discovered examples cause very serious illnesses, including SARS.

Where Do They Come From?

Camels and bats, or at least these animals are frequently felled by coronavirus. However, viruses change and mutate, and it appears that several examples have evolved to where they can “jump” from animals to humans, and then infect other humans. This isn’t so rare—this is how swine flu, so named because it originated in pigs, became a thing for humans to freak out about.

The outbreak in Wuhan may have originated in an animal market in that city in December, which is leading to all kinds of very thin, extremely racist theories peddled by dimestore conspiracy theorists that Chinese peoples’ “weird diet” of bats and other creatures Westerners don’t eat is the cause of all this.

But the market may also not be where the virus originated. A paper published Friday in the medical journal The Lancet stated that 13 out of the 41 original cases documented in Wuhan “had no link” to the market, as Science magazine noted. In this analysis, the market is just like an airport or a city or some other mass gathering of people. “The virus came into that marketplace before it came out of that marketplace,” Daniel Lucey, a Georgetown University researcher, told Science.

So, as for a definite source of this virus? We still don’t know, and won’t for some time. Anyone proffering theories or accusations with certainty is ignorant, or a con and liar. And really, it doesn’t matter all that much. By now, new and nasty strains of viruses appearing is a thing that happens every couple of years. SARS, swine flu, bird flu and now this. It’s not fun, or common, but you could absolutely call it “normal.”

So What Should I Do?

Unless you’re a public health official or a frequent flier to areas affected, there’s very little you can do. As The New York Times reported, travelers arriving from Wuhan are being screened, and there are no reports of viral transmissions in the U.S. Chinese officials are shuttering tourist sites and closing off avenues of transit, so if you had a big trip or vacation to the country planned, you may be out of luck. Major U.S. companies including Bloomberg, Facebook and General Motors have also banned their employees from visiting China while the epidemic is ongoing, as The New York Times reported.

As for the rest of us? There seem to be other things to worry about, and even if you do contract the virus, all is not lost. The case in Germany involves a 33-year-old man in Bavaria who, officials said, is in “good condition.” Another case in Japan, a man in his 60s, is hospitalized. As the CDC reported, “reported illnesses” from individuals with coronavirus have ranged from “little to no symptoms” to “severely ill and dying.” Symptoms do include fever and respiratory ailments, so if you have these, stay home from work (which you should be doing anyway) and seek medical attention if it seems particularly bad (which you should also be doing; hopefully you have good insurance). 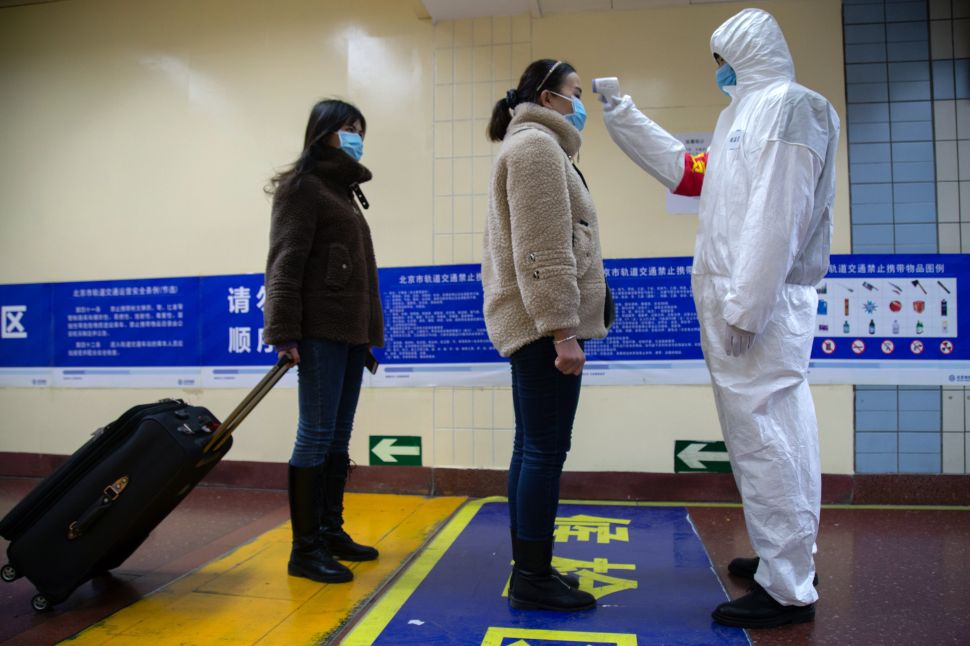