The Wuhan coronavirus has killed 132 people in China, and at least six thousand cases have been confirmed in mainland China and 91 outside of China, including at least five cases in the United States.

Earlier today, 201 Americans evacuated from the epicenter of the outbreak landed at March Air Reserve Base in California. Despite already clearing multiple health screenings, they will be held for observation by the Centers for Disease Control and Prevention (CDC) for additional monitoring.

SEE ALSO: Why the Coronavirus Means a Tough 2020 for Starbucks

Several airlines are also taking precautions. United Airlines will suspend 24 flights between the U.S. and Shanghai, Beijing and Hong Kong next week, citing decreased demand. The Chicago-based air carrier’s stock has tumbled in recent days on the heels of this growing public health crisis.

American Airlines is also suspending flights from Los Angeles to Beijing and Shanghai from February 9 through March 27, although flights between both Dallas-Fort Worth and Los Angeles to Hong Kong will continue as normal. Delta has not yet suspended flights.

The CDC confirmed to USA Today on Tuesday that it will be monitoring passengers for virus symptoms at 20 major U.S. airports.

Nearly 60 million people in China are under a partial—and, in some cases, full—lockdown to limit the spread of the virus.

Some health officials have praised China’s response. “The Chinese authorities have responded vigorously. They have been open about the situation, which is very helpful to public health personnel in other countries. They have implemented a virtual quarantine of the entire city, to the consternation of its people, but which should help contain the epidemic,” said Dr. Edward Hoffer, an associate professor of medicine at Harvard University.

The symptoms of the coronavirus mirror the flu, including a runny nose, headaches, coughing, sore throat and fever.

“People should get their flu and pneumonia shots if they have not already,” Dr. Celine Gounder, clinical assistant professor at the NYU School of Medicine and Bellevue Hospital and host of the podcast American Diagnosis, told Observer. “It seems counter-initiative but the symptoms for the flu and the coronavirus are very similar. If you present to [an] emergency room and say that you’ve received your flu or pneumonia shot—it’s not that those are 100% effective—but then we will be more likely, if you come in with a cough or a fever, to think if we should test this person for coronavirus. It helps us be more targeted in our efforts to contain this.”

“Not to mention, at least in the U.S., we’ve seen between 8,000 to 20,000 deaths from the flu since October,” Gounder added. “Getting your flu shot will make it easier to contain the coronavirus.”

As the virus spreads globally, people need to be careful in their communities—especially if they are traveling and even if they are not sick. For those who still plan to hit the skies, take serious precaution.

Gounder suggests that flight attendants, at the very least, offer people they suspect are sick a mask which will help limit the spread of the virus. United, American and Delta airlines have waived change fees for some flights because of suspended and reduced services due to the virus. Gounder also suggests that passengers limit exposure to and physical contact with other passengers. “Passing drinks and touching tray tables can be risky,” Gounder explained. “Have Purell on hand.”

On the ground, don’t touch poles with your bare hands when using trains or buses, and if possible, maintain your distance from other people. Gounder suggests keeping a three-foot distance if you are in open air.

If you are inside, that’s a different story. “Keep windows open to the degree that you can, because that natural ventilation is really the number one way to reduce airborne transmission,” Gounder suggested.

At the end of the day, if you are feeling under the weather, play it safe—just stay home and if need be, seek medical attention. 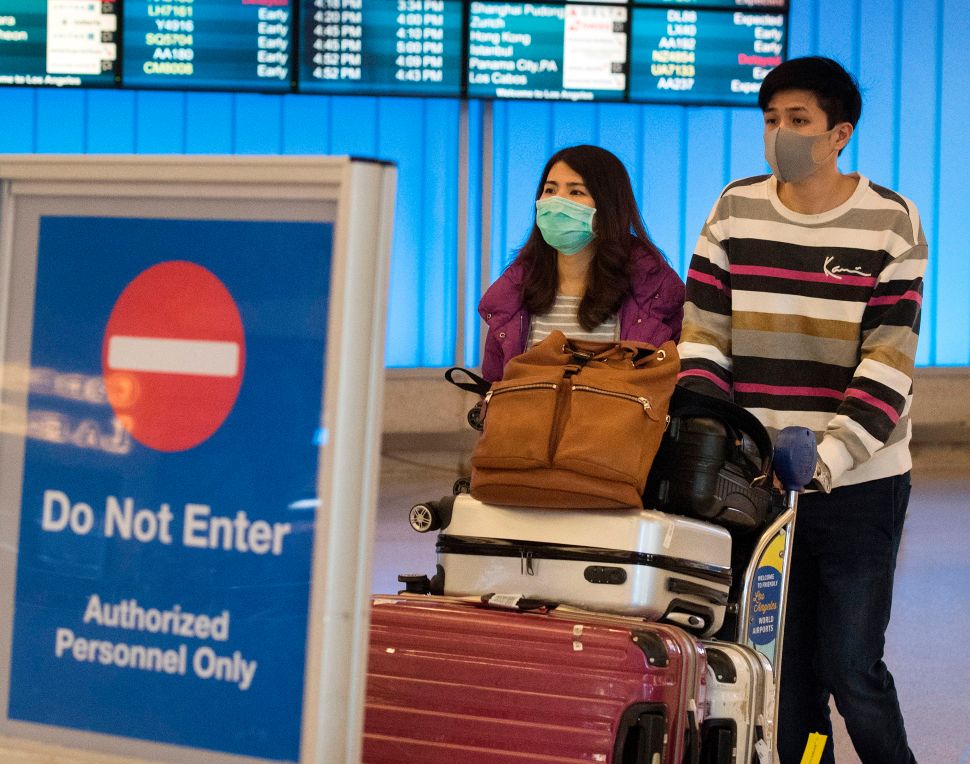