When Arrow ends its eight-season run on the CW Tuesday night with series finale “Fadeout,” the show will be sent off with much pomp and circumstance and with what is sure to be an egregious amount of attention paid to the legacy of its leading man: Stephen Amell’s Oliver Queen, aka the Green Arrow. Hell, the show’s producers already went above and beyond in giving Ollie an extraordinary amount of fanfare, killing him off twice—twice!—in recent episodes of the “Crisis on Infinite Earths” crossover event. Those episodes, by the way, include extended scenes with characters reminiscing about and eulogizing him as they talk to his empty costume behind glass, as well as the dramatic unveiling of a Justice League table at the new Hall of Justice with all the seats filled except for the Green Arrow’s, emblazoned with his arrow logo and empty in spite of the legions of other Arrows who have taken up his cause over the show’s course. Legacy!

SEE ALSO: Why ‘Knights of the Old Republic’ Would Make Perfect Sense As a ‘Star Wars’ Movie

Like Queen himself, Arrow certainly leaves a legacy behind. For DC Entertainment, that legacy is obvious: the enormous superhero universe it spun off from the show, resulting in The Flash, Legends of Tomorrow, Supergirl and on and on. For the corporate executives, Arrow really only had to be excellent for two seasons—just long enough to introduce a spinoff—and that’s pretty much exactly how it played out. Save the brief reprieve of Season 5, Seasons 3 through 7 saw a steady decline in narrative quality. Trying to turn Oliver Queen into Bruce Wayne was a bad, boring idea, and adapting the “Longbow Hunters” story that was not Mike Grell’s iconic, acclaimed comic saga was too. That Season 8 proved a glorified memorial mashed up with an All Heroes On Deck adaptation of one of the comics’ more over-the-top crossover events should surprise no one.

But for fans who are paying attention, none of that should matter. In its first two seasons, Arrow delivered the best, most true-to-comics live-action adaptation of a superhero and his stories to date. That will be Arrow‘s true legacy, even if the majority of DC or Warner Bros. execs, CW viewers, and superhero fans will never notice it.

Superhero comics can be, and are, a lot of things. Dark and gritty. Silly and sappy. Jam-packed with action and acts of derring-do. Brimming with soapy operatics and over-dramatic storylines. Visual and narrative. Self-serious and self-aware. (Remember the salmon ladder?) They balance serial stories of epic scope with one-off episodic adventures and character studies with elaborate setpieces. Any adaptation that doesn’t touch on all of these aspects of superhero comics is missing an integral point of the medium: its flexibility.

Arrow’s first two seasons do this more effectively than any other live-action superhero adaptation, period. (No, they still can’t quite compete with the DC Animated Universe, but really, nothing can.) This is not to say that these seasons are better than, say, Tim Burton or Christopher Nolan’s takes on Batman. Arrow doesn’t have the same aspirations, or a two-hour-plus time restriction. And as far as adapting comics goes, the episodic possibilities mean that television is simply a better-suited medium for the task than cinema—or, uh, amusement parks, as Martin Scorsese might insist. The Marvel movies do their best to link all their giant set-pieces together over a score of movies, but ultimately, they just don’t have the same coherence as their televised counterparts.

But with its first two seasons, Arrow struck bullseye after bullseye. The show’s oft-maligned storytelling technique, of pairing present-day superheroics with flashback sequences depicting Ollie’s time as a castaway on the island of Lian Yu and other locales, still felt fresh and strong in these seasons and allowed for the show to develop its own mythology even as it mined it. That’s another huge thing in comics: these characters have been around for so long that their mythologies are massive. To show those mythologies from the outset could be considered borderline impossible. Yet Arrow was up to the task, and its actors, even those starting on rocky footing (like its rakishly handsome but initially hollow Amell), grew into their roles and their characters’ places in that mythology winningly. Over time, Oliver and characters like John Diggle (David Ramsey), Felicity Smoak (Emily Bett Rickards) and the Lances Laurel (Katie Cassidy) and Sara (Caity Lotz) ping-ponged onto other shows and even other universes based on the foundation established in these seasons.

Then there’s the villains. A hero is only as interesting as his rogues gallery. And in the anti-hero/anti-villain Slade Wilson, better known to comics fans as Deathstroke and portrayed with roguish charm and charismatic depth by the terrific Manu Bennett, Arrow creators Greg Berlanti, Marc Guggenheim, and Andrew Kreisberg picked the perfect foil for Queen. Slade’s arc—in which he grows from Oliver’s hesitant and verbally abusive ally-by-circumstance to dear friend and mentor to bitter nemesis madly determined to burn everything his old friend loves to ash—is built on phenomenal storytelling. And the show’s soap operatic dramatization only enhances the emotional impact. Everything that happens, including Wilson’s murder of Oliver’s mother, is totally over the top, and yet it never fails to land. Part of that is because Bennett is just so good. (Give the man an origin story movie!) Another part of it is just that this is exactly what superhero shows should be: over the top! Just not, you know, to the levels of its later seasons.

I’ve been screaming at most of my comics-loving friends that they need to watch the first two seasons of Arrow since, well, the airing of the second season of Arrow. They mostly haven’t listened, and probably neither will you. But I’ll say it again: the first two seasons of Arrow are a goddamn bullseye. They won’t be the show’s legacy, but they should be. In my Hall of Justice, it’s the Season Two arrow logo emblazoned on the chair. And there it shall remain. 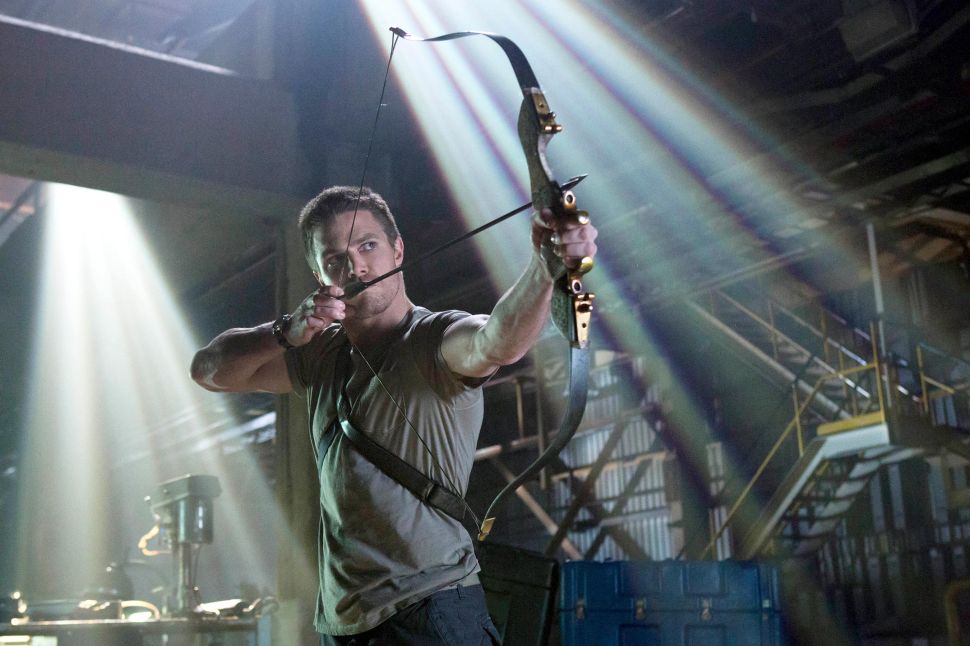