The art world saw out the end of the 2010s with the story of a banana; specifically, Maurizio Cattelan’s infamous piece of fruit duct-taped to a wall at Art Basel Miami Beach. It now appears that the first big story of this decade could revolve around a fruit salad, when New York-based artist Darren Bader opens his latest exhibition at the Whitney Museum of American Art titled “Fruits, Vegetables; Fruit and Vegetable Salad” (on view from January 15 to February 20).

The exhibition, which will show untitled work by Darren Bader from the Whitney’s permanent collection that was acquired in 2015 and never before presented by the museum, will feature a wide and somewhat unusual selection of fruits and vegetables posing as sculptures on pedestals. At scheduled times throughout the week (Mondays, Wednesdays, and Sundays from 3 to 6 p.m., and Fridays from 7.30 to 10 p.m.) museum staff will remove the fruit and vegetables and create a fruit salad while the gallery sits empty. The preparing of the produce will be captured on video in the museum’s Studio Cafe Kitchen, projected in the gallery, and served up to visitors. The process will then repeat.

SEE ALSO: A Knockoff of Maurizio Cattelan’s Art Basel Banana Is Now for Sale—At a Discount

Bader has a history of work that, on the surface, could read as a series of pranks. His Whitney Biennial piece in 2014 displayed two donation boxes stating, “All donations will go to something,” and “All donations will go to nothing.” He injected a piece of lasagna with heroin in a 2012 work titled “lasagna on heroin” and released a pair of goats into Andrew Kreps Gallery in New York in 2011.

Yet, beyond the prank exterior, Bader has gained acclaim as a conceptual artist for his interrogation of the point of art and exploration of art’s possibilities. The artist told the New York Times last year that he is “a writer, first and foremost”, existing in the space between writing, sculpture and curating. His previous exhibitions have also often been collaborative. Often drawing from everyday objects, he provokes the viewer into facing the absurdity of reality. When wanting to learn more about his work, his website itself sends you on a confusing journey through links, videos, and pop-up boxes encouraging you to download PDF files.

The exhibition’s curator and senior curatorial assistant at the Whitney, Christie Mitchell, first became familiar with Bader’s work in 2015, after they acquired it for the collection. “After conducting grocery shopping according to the artist’s instructions, and setting up the fruits and vegetables on pedestals with our art handling team, I was struck by the uncanny nature of the produce as sculpture, and how beautiful they looked in the gallery,” Mitchell recalls.

“Finding over 40 varied and distinctive fruits and vegetables in the middle of winter is no small task, but we’ve been planning our shopping trips and we’re thrilled to be serving salad.” says Mitchell. And, as with all of Bader’s works, you can expect the salad to be served with a side of playfulness, provocation and a conceptual examination of the age-old question: “what does this really mean?” 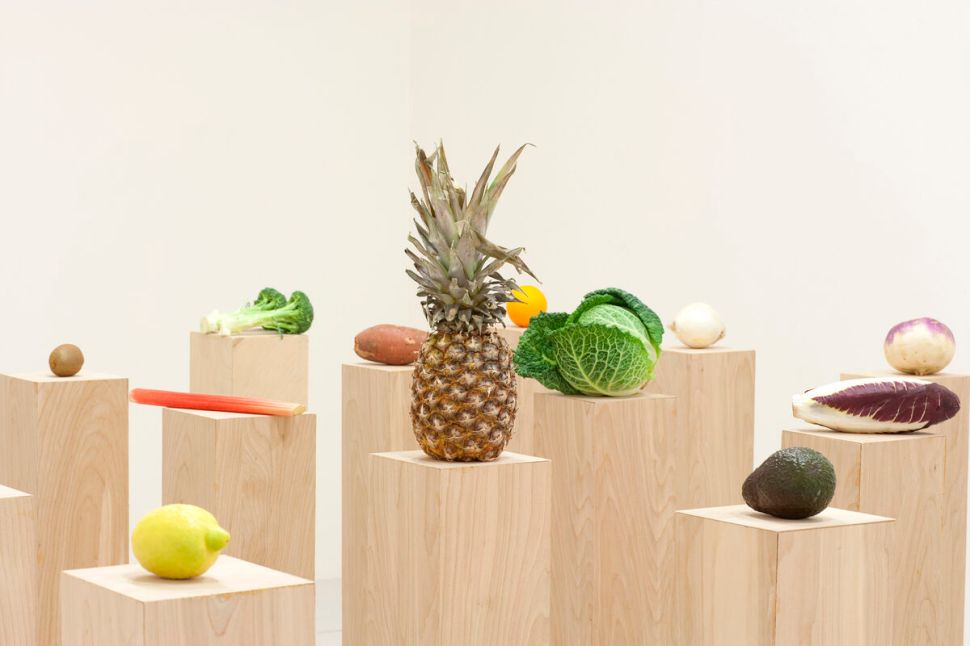