“I’ve always been interested in canceling pictures in some way,” says the artist Elad Lassry. How that manifests in the Israeli-American artist’s photographs is something like a process of elimination through playful distraction. A photograph is never just a photograph in his work. Representation is discarded and then, as Lassry says, “boomerangs back to you.”

He goes about this in a few ways. First, there is the frame, which is often painted to mirror or conflict with something in the image that draws your eye. Sometimes there are objects hanging off the frame, a cord or wires or, within the frame, a matte made of leopard-print carpet. The photographs themselves are of common subjects—animals sitting for portraits, still lifes, stock imagery from appliance catalogs, fashion campaigns. Some are pulled from archives, others are created from scratch. It’s hard to tell the difference.

SEE ALSO: Abramović, Marshall and McQueen: Looking Back at the Best Exhibitions of the 2010s

Occasionally, there are not even pictures at all. At the center of a new exhibition of Lassry’s work at SFMOMA opening on January 4 are a series of seven sculptures made to resemble buckets, welded together from discarded motorcycle gas tanks. “There is an enormous distance between the photographs and [the sculptures],” Lassry says. “They are useless, they are heavy.” They provide a configuration of the space, where to stand and not stand, and how to walk around the room. But he hopes people will see them for what they are: buckets. They are meant to be filled. People can put things in them, even photographs, he adds.

On the walls of the gallery are two new groupings of photographic work. The first, a series of nine photographs show what Lassry calls an “assignment.” Except the assignment never existed. “It’s about participating in something that has nothing to do with me,” Lassry says. He went through an agency, found a model who had worked with Bottega Veneta, and staged a fashion shoot as it would normally happen. Four of the photographs show a model, in different poses, wearing a bright purple jacket with buckles up the front; the remaining four photographs show the same women in a crimson red shirt with a ruffle collar. “It’s a campaign with no invitation and no client,” he adds.

In Lassry’s work, we are forced to question how we read images. If there is no client and the objective is not to sell clothing, what makes this a fashion campaign? Focusing on the process of how these images are made, is there a way to rearrange their meaning? At first glance, they look the same. They would not be out-of-place in the pages of a contemporary fashion magazine. But in a different context, with their capitalist attributes stripped away, what do they become?

It’s a question not meant to be answered; or, rather, the answer, as one exists, is constantly shifting. In the final series of photographs, Lassry has combined a series of images sourced from eight-by-ten negatives of household products from a 1950s department store. He was initially interested in their large-format—a mode of working “later reserved for the masters to photograph mountains,” he quips—and the idea that the images here are in service to a process of commerce, where items are cataloged on their way to being sold. “There’s tension that comes up for me that has to do with questions around what makes an artwork photographic,” he explains. “Is it the extent of mastery?”

He plays with that tension by manipulating images in ways that he calls “brute” and “absurd.” In one, a black-and-white picture of a carpet is overlaid with a color picture of a sea spider; elsewhere, roses, canna lilies and flowering quince, among other things, share space with dishware, sofas and mattresses. In another image, he leaves the hastily-applied cropping tape as it was first used. He pokes at the boundaries of the medium, testing its resiliency. How far can a photograph be pushed before it stops being a photograph?

This is a different question than “is photography art?” Lassry’s not interested in debates around the democratization of the medium, or how Instagram has turned everyone into a photographer. For him, photography is a thing constantly in transition. What it is and what it can and will be is anybody’s guess. “It’s up for grabs,” he says. 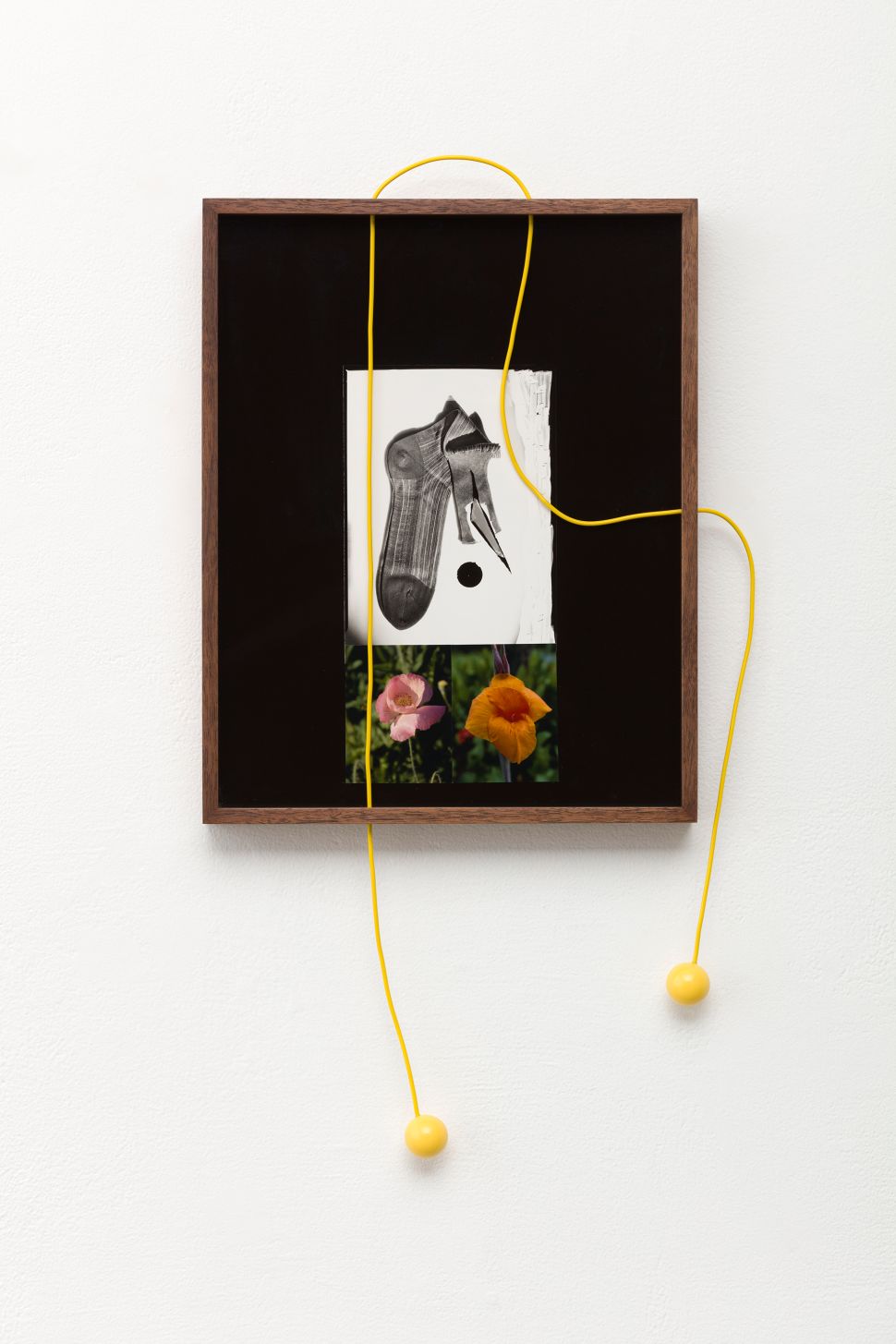