The December 30 delivery of the first Chinese-made Model 3s—all to Tesla employees—capped a remarkable year for Tesla.

The company see-sawed from endangered species on the brink of failure to viable company—with stock actually worth about $420 a share, fulfilling a “prophecy” CEO Elon Musk made in one of his very questionable tweets—to making ambitious plans for a country-wide network of charging stations in China, where the founder is set to travel on Tuesday to celebrate the first delivery of Chinese-made Teslas to private buyers.

“Conquering” the Chinese market is the ultimate goal for any would-be world-beating Silicon Valley kingpin. The Chinese prize has eluded other founders, most notably Facebook boss (and Mandarin speaker) Mark Zuckerberg—and Tesla managed to do this at a work rate that was “quite fast, even by Chinese standards,” as one wowed analyst told Bloomberg.

What did Musk do differently? As Bloomberg has reported since 2018, when plans for the Chinese factory were first made public, Tesla has spent a very long time and a lot of money in China. Musk himself made repeated personal visits—and apparently the same charisma that inspires cult-like devotion among Tesla owners (and Twitter followers) helped charm Chinese officials.

All that helped ensure that everyone wanted the Shanghai Gigafactory to happen—and in this instance, “everyone” is the authoritarian Chinese government and its unique brand of command capitalism.

Building a factory in another country—such as Germany, where the “fourth” Gigafactory (but only the third to build cars) is in the planning stages—tends to take a long time, because of democracy. That’s not something Chinese leader Xi Jinping is overly concerned about—ask the Uyghurs rotting away in concentration camps.

In Tesla’s case, government “encouragement” meant that the 86 acres where the factory now hums was specifically set aside for electric car production—and the company’s negotiations with the government meant it was the only bidder. All of the funding, in excess of $1.5 billion, came from Chinese banks, meaning the Chinese state will ultimately benefit.

Add to all this that the Chinese government is absolutely interested in becoming the world leader in electric car production—and, well, you have a Gigafactory from start to finish in about the time it would take environmental regulators in the United States to determine how the factory might affect wildlife migration patterns.

But is this good—and will you be driving a cheaper Chinese-made Model 3 anytime soon, and should you pick a Shanghai model over a domestic one? That depends on who you ask, and what your view of the world is.

Tesla delivers its first "Made in China" car. How do we know it doesn't contain compents made by the forced labor of Uighur and other Turkic Muslims detained in Xinjiang? https://t.co/r47t40VnM3 pic.twitter.com/b2aAPvzMtG

While the Chinese factory realizes Musk’s stated dream for his company to go global, China might not be the market Tesla is looking for. As Bloomberg noted, more than half of electric cars sold in the country cost less than $14,300. Model 3s imported into China cost about $63,000, whereas the domestic-made models will run about $50,000, as per The Verge—better, but still far above the reach of most consumers. Indeed, about 70% of Tesla’s sales so far have been to “institutional” customers, such as taxi-cab companies and government fleets.

But as Human Rights Watch director Ken Roth tweeted, there’s also the very thorny issue of China itself. You could be all Ricky Gervais about this, and rightly point out that China is a rampant abuser of human rights, treats factory workers like peons—a very large reason why so many consumer goods are made in the country—and ought to be ostracized rather than embraced, or invested in.

Or you could take the realist view and recognize that affairs in China are unlikely to dramatically change anytime soon—and that those worker abuses are part of the reason why things like Chinese-made solar panels are affordable. Keep in mind that other electric vehicle companies want to build in China, and that China is a world leader in discouraging gasoline-powered cars and encouraging electric vehicles—something the U.S. can’t boast—and the picture that emerges is somewhat more complex, but no less rosy for Tesla and Elon Musk, both enjoying what appear to be a very solid foothold in an enormous market for their signature products. 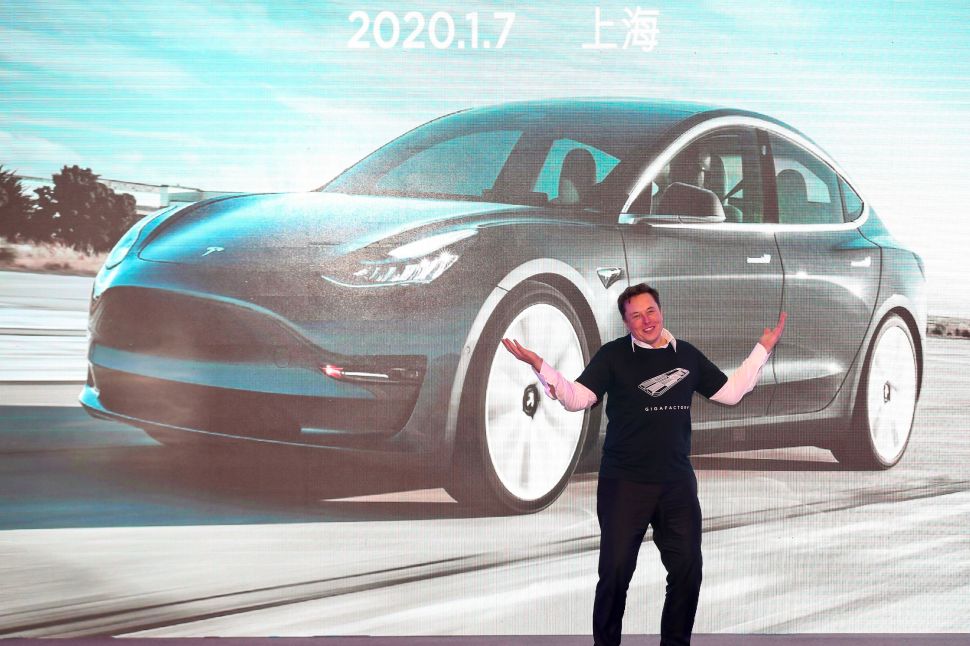