Origin is a new all-electric, self-driving vehicle. And it made its debut last week, when it was unveiled in San Francisco. This car-of-tomorrow—that’s happening today—was designed by GM, Cruise (a GM subsidiary) and Honda Motors. Think of the Origin like a driverless shuttle, basically a box with wheels.

And here’s what this future of the automobile industry has to offer:

Did we also mention that Origin is driverless, i.e. sans driver…

Origin is designed to last for one million miles of driving. Three interior cameras monitor the passenger’s safety. Also, there’s darn good reason that Origin is electric—and not just for the environmental reasons—but also to keep costs down.

“When you’re owning a whole fleet of vehicles, you want the operational costs to be as low as possible,” Carl Jenkins, Cruise’s vice president of hardware engineering, told CNBC. “EVs have a much lower operational cost, because there’s way fewer parts and fewer moving parts.”

Sounds neat—but you won’t be able to buy your very own Origin. No, the autonomous vehicle is made for ridesharing and will be accessed through the Cruise app, similar to what we already see with Uber and Lyft. (Although, I bet Origin will treat their drivers better than Uber.) The company’s plan is to launch a fully driverless robo-taxi service that will premiere in San Francisco. To make things happen, Cruise has already raised a whopping $7 billions in venture capital.

So, how does it work?

Once your driverless Origin vehicle arrives, you enter a code on a keypad outside the door. Inside, you press a button to start your autonomous journey. Then, enjoy.

And this is a major step up from the last autonomous rideshare we saw in 1990 with Johnny Cab from the movie Total Recall. (Note how the Johnny Cab driver is more annoying than Siri when it doesn’t understand commands.)

To emphasize the shape of car things to come, GM has announced that the company has committed $3 billion to building electric and autonomous vehicles. Companies such as Ford, Fiat Chrysler and Toyota Motor are also throwing their hats into the self-driving shuttle service space, which means we should see a string of unveilings in the next months and/or years.

Since Origin doesn’t have such traditional car components—like a steering wheel—Cruise will need an exemption from the National Highway Traffic Safety Administration to operate these driverless vehicles.

Just think of the modern history of ridesharing within the last decade; Uber popped onto the scene and replaced cabs as the main means of city rideshare transport, putting taxi cab drivers out of work, which is now looking to be replaced by autonomous cars—putting Uber drivers out of work. 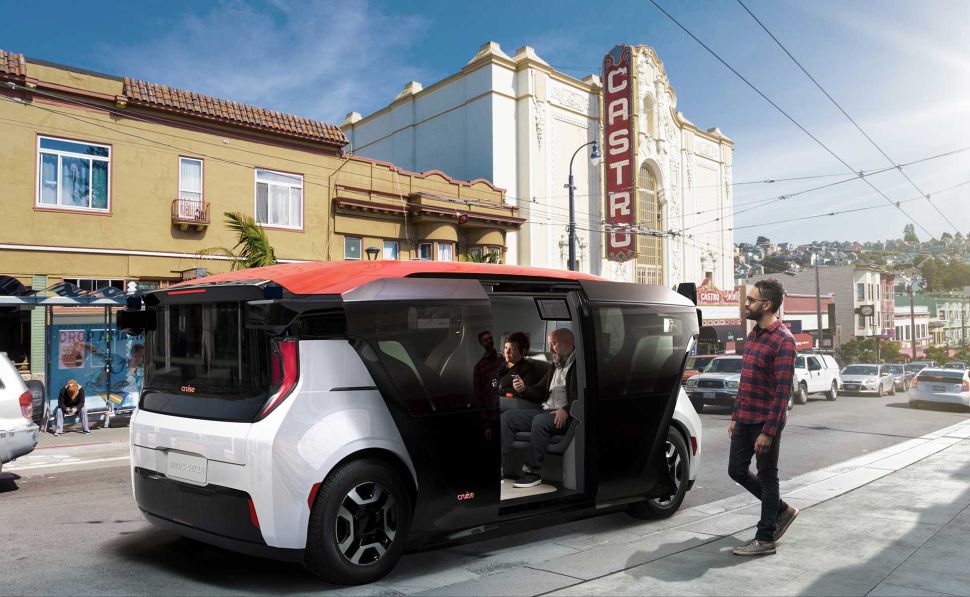