Generally speaking, modern sitcoms rely on characters to propel their stories, while dramas, particularly the serialized variety at the forefront of Peak TV, chew up plot to sustain themselves. Comedies round into shape as both audiences and creators familiarize themselves with the characters, making tweaks on the fly and adjusting the show as needed. It’s why beloved series such as The Office, 30 Rock and Parks and Recreation needed a season or so to find their footing. Dramas undergo such development as well—Jack Shepherd was initially meant to die in the pilot of LOST—but not as often. Cliffhangers, twists and notable plot devices need specific pre-planning in most instances. As such, dramas can often lose steam as time goes on and the plot machinations become increasingly frenetic and ridiculous, while sitcoms can age gracefully thanks to their character-based fuel. Rarely, however, is a series capable of combining the best elements of both genres. But NBC’s The Good Place is the rare shrimp that stirs the cocktail sauce.

Created by Michael Schur (Parks & Recreation, Brooklyn Nine-Nine), The Good Place will end its brilliant four-season run tonight—with an “epic cameo” apparently. It’s been hailed as one of the most innovative sitcoms in recent memory and the rare broadcast offering that dared to retool convention. I’ve previously described the show as the spiritual successor to Community due to its willingness and ability to upend form and function, but The Good Place’s ability extends beyond just structural audacity. (I’ve also spent an inordinate amount of time thinking about alternative careers for the Blake Bortles-loving Jason Mendoza).

The show’s first season employed mystery box storytelling, which Film School Rejects sums up as a story that basically revolves around: “What’s the deal with ____?” It is a plot construction founded on asking questions to central mysteries and providing successive reveals and twists to compound curiosity. Plopping audiences into a technicolor afterlife with its own rules and impossibilities certainly qualifies The Good Place. Subsequently revealing in the finale that the entire season actually occurred in the Bad Place—complete with an all-time heel-turn from Ted Danson’s neighborhood architect/actual demon Michael—was a twist of Shyamalanian proportions.

It reoriented our entire understanding of the series and provided fans with the juiciest of re-watches. But, crucially, the twist did not affect the central tenet of the series—four flawed individuals striving to become better people despite the inherent challenges—nor did it become a storytelling foundation for Schur and the writers.

Too often, series with lots of twists set up each new big reveal despite eroding our interest in the story and characters. Westworld has been far more interested in confusing viewers with multiple timelines and splashy reveals—everyone is a robot!—than exploring the existential and literal loop of trauma its characters are bound to. Mr. Robot delighted fans in its Golden Globe-winning rookie run with its psychological mind games, but Season 2 fell short when it again tried to outsmart and misdirect its audience (Redditors sniped that reveal well in advance).

Mystery boxes ironically end up leaving creatives boxed into an unwinnable shell game in which audiences are inevitably dissatisfied with the answers or burnt out on guessing games. The Good Place executed a perfect Season 1 twist but never attempted to one-up itself in subsequent seasons. Instead, it kept things interesting by creatively clearing the table with memory wipes and timeline reboots (“Jeremy Bearimy” should be taught in film school as an example of prime exposition) while further focusing on the mission of our characters: self-improvement, even after death. In doing so, The Good Place achieved the ideal mix of great characters who acknowledge their flaws and grow as individuals and an entertaining plot that never bent over backwards to recreate early magic. As a result, the series has often boasted an organic charm uncommon to high-concept entertainment. There’s a reason the show is such a digital and streaming hit, despite never posting robust live ratings.

On paper, The Good Place shouldn’t work. A broadcast sitcom about moral philosophy set in the afterlife sounds like a studio’s attempt to desperately utilize its Socrates IP before the rights revert. But by mastering the mystery box with restraint and focus, Schur and his team of ding dongs (we’ll miss Bad Janet) have given audiences something truly special. Food puns, yes—but also a refreshing example of how the meaning of life can double as the basis for sound storytelling. 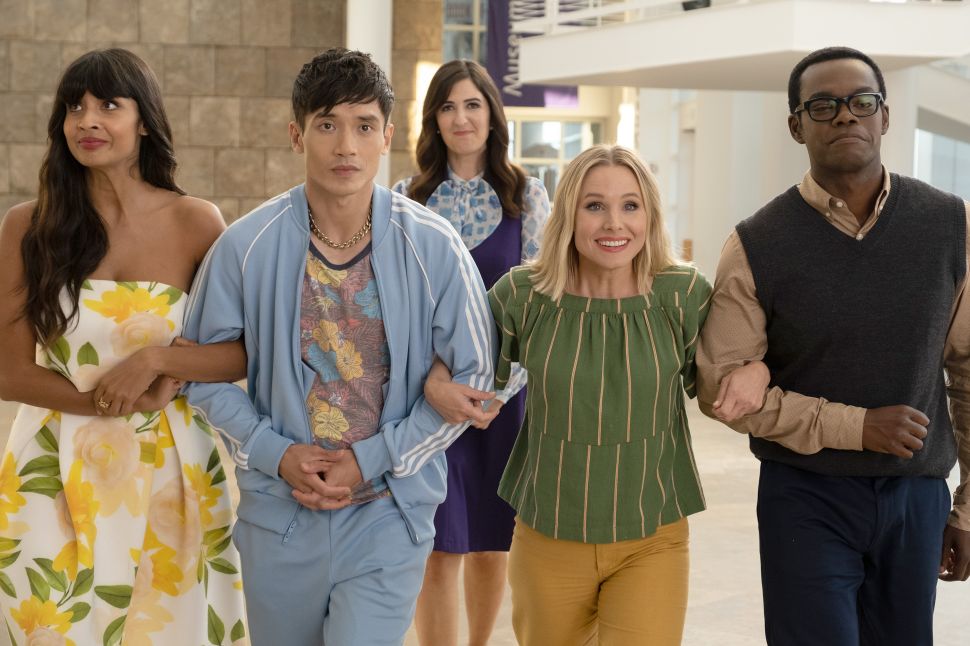