When Jane Alexander appears in a new play (or even an old one) it’s something of an event. One can only wonder what attracted this distinguished, award-winning stage veteran to Grand Horizons, a benign, mediocre rom-com of monumental insignificance. Now playing at the Helen Hayes Theater on Broadway, it is something of a bore.

Ms. Alexander and her reliable co-star, James Cromwell, play Nancy and Bill, a couple of senior citizens in a suburban retirement community named Grand Horizons. When the curtain rises, they are preparing for another generic meal in their tract-house unit which, like the rows of cookie-cutter houses on their street, is part of a lineup of little wooden sardines. Methodically, Nancy sets out an unappetizing dinner and joins Bill at the table, neither of them saying a word. The first sentence spoken in the play from Nancy’s mouth are “I think I would like a divorce.”

SEE ALSO: Laura Linney Is a Marvel in Solo Play ‘My Name Is Lucy Barton’

When the laughter calms down, Bill replies, “All right,” and the uninspired screams erupt again. This continues throughout a tepid play about a marriage between two people that collapses after 50 years for no convincing reason except a need to find some definition in their lives. He’s a pharmacist who wanted to be a stand-up comic. She’s a retired librarian who has just discovered the unexplored passions inherent in the use of vibrators. They have two sons—Brian (Michael Urie), a neurotic gay theater director who has troubles of his own with intimacy because he’s never seen any examples of it in his parents. Older son Ben (an excellent Ben McKenzie), is a dull lawyer with a pregnant wife who should be the voice of reason, but he’s so shocked by his own wimpy recalcitrance in all matters domestic that he packs up his wife and flees. Everyone in this family is bored with each other. It doesn’t take long to decide why we in the audience are bored with them, too. There’s an embarrassing scene in which Brian brings home a one-night stand and fends off his advances until the other man grabs his underwear and runs. Another brief appearance, by Bill’s new girlfriend (Priscilla Lopez) after a withering conversation with Nancy, comes to nothing, and she steals away without saying goodbye. The entire cast, good actors all, is serviceable but strapped by the rudimentary staging of director Leigh Silverman, while the dialogue by playwright Bess Wohl, making her Broadway debut, is so pedestrian it derives too heavily from the late Neil Simon for comfort. For laughs, the elegant, stolid, sophisticated Ms. Alexander brings down the house with a lewd discussion of oral sex that propels the gay son to scream in terror. The few genuine jokes are weakly babbled by a cast so laid back you wonder if they’ll fall asleep in mid-sentence.

Even if you’re still vulnerable to the easy, predictable clichés of dysfunctional family comedies that used to support theatre-club matinees, the tepid antics here show that the folks in Grand Horizons have clearly never seen enough episodes of Will and Grace for any fresh humor to rub off. 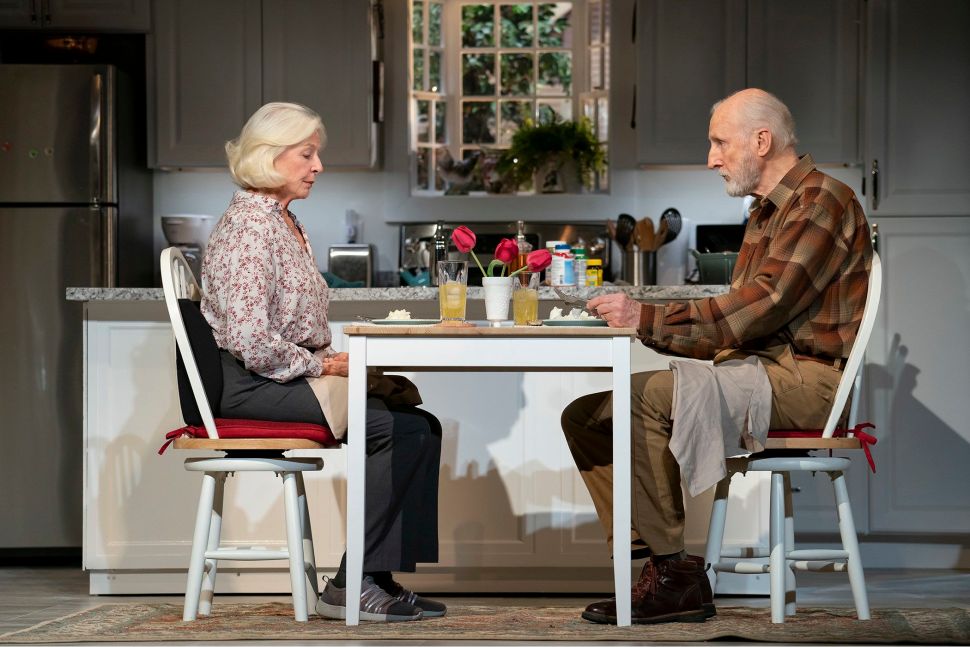