To provide a blinding glimpse of the obvious, it’s fair to say that Lin-Manuel Miranda’s Hamilton is a successful Broadway musical. The hip-hopera earned a record-setting 16 nominations at the 2016 Tony Awards, eventually winning 11, including Best Musical. It also won the 2016 Pulitzer Prize for Drama, as if its critical bonafides weren’t established enough. According to TheWrap, Hamilton has earned more than $620 million at the box office since it opened in 2015, putting it within striking distance of the top 10 highest-grossing musicals of all time. Given its ongoing dominance on Broadway, it will soon find itself among that crowd. But don’t worry if you still haven’t seen it—Miranda plans to eventually release a filmed version of the production featuring the original cast.

“Hopefully sooner than later,” Miranda recently told Variety. “It’s no secret that we filmed it. We filmed the show with the original cast the week before the beginning cast members began to leave the show…What I’m most excited about is there will be a point at which, you all have that friend who brags, ‘I saw that with the original cast.’ We’re stealing that brag from everyone. You’re all gonna see it with the original cast. We’re just trying to find the right time to do it.”

In summer 2018, The Wall Street Journal first reported that a filmed version of a 2016 stage performance with the original cast was being bid on by major film studios. At the time, it was said that bidding could exceed $50 million. For comparison, Andy Samberg’s Palm Springs just set an all-time Sundance Film Festival acquisition record for “just” $17.5 million.

The outlet noted that the filmed version would not be released until at least 2020. Since Hamilton has not been added to any major studio’s release schedule this year and the show remains a powerful ticket-seller on Broadway, we cans safely expect the wait to extend a bit longer.

Warner Bros. is set to release a new movie version of In the Heights, based on the Broadway musical of the same name from Miranda and Quiara Alegría Hudes, this summer. Netflix has acquired the worldwide rights to Miranda’s feature directorial debut, Tick, Tick…Boom! with Andrew Garfield attached to star. In April 2021, Sony Pictures Animation will release Vivo, which features 11 songs written by Miranda. It’s anyone’s guess which major studio will eventually release the filmed version of Hamilton.

UPDATE 2/3: Walt Disney Studios has announced that it will release the filmed version of Hamilton on October 15, 2021. The studio acquired the rights in a record-breaking $75 million deal, Deadline reports. Hamilton will receive a wide global release before settling on Disney+.

Disney presents: Hamilton.
With The Original Broadway Cast.
Filmed onstage at The Richard Rodgers Theatre.
In A Theater Near You.
October 15, 2021. #Hamilfilm pic.twitter.com/08YP6CTbF8

An earlier version of this article incorrectly stated that Sony’s Vivo would arrive in theaters in November. 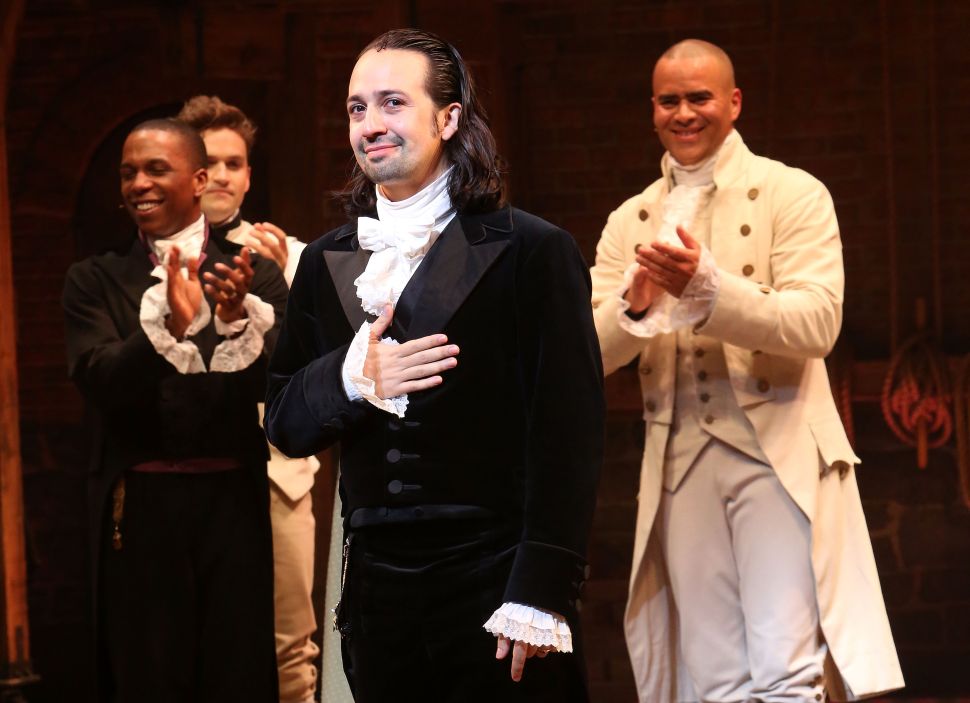