The dire planetary needs foretold by our collective climate crisis have touched every industry in the world, including the fashion magazine landscape. For January of 2020, Vogue Italia announced that it’s rising to the challenge to reduce carbon emissions by publishing its latest issue without any editorial photography. Instead, editor-in-chief Emanuele Farneti explained, every image in the issue has been created by artists (in collaboration with stylists and models) who illustrated the clothes on display rather than taking photos. Every separate cover of the January edition, as well as every Vogue-produced image within the magazine’s pages, has been created by artists, including names like Vanessa Beecroft, Cassi Namoda, Milo Manara or Yoshitaka Amano.

For the covers, each artist has created their own visual interpretation of a model dressed in Gucci. Namoda’s painting of the model Ambar Cristal shows the latter crying as she sits in a red chair, red wine spilling out of her overturned glass. Conversely, Yoshitaka Amano’s portrait of Lindsey Wixson is distinctly dreamlike: the model’s hair appears to float away from her head in the form of blue petals.

*NO PHOTOSHOOT PRODUCTION WAS REQUIRED IN THE MAKING OF THIS ISSUE A preview of the January 2020 Vogue Italia Special Issue on newsstands January 7th @Yoshitaka_Amano featuring @LindseyWixson in @Gucci Cover 5 of 7 *** "All of the covers, as well as the features of our January issue, have been drawn by artists, ranging from well-known art icons and emerging talents to comic book legends, who have created without travelling, shipping entire wardrobes of clothes or polluting in any way. The challenge was to prove it is possible to show clothes without photographing them. This is a first, Vogue Italia has never had an illustrated cover: and as far as I know no issue of Vogue in which photography is not the primary visual medium has ever been printed. Thanks to this idea, and to these artists' process, the money saved in the production of this issue will go towards financing a project that really deserves it: the restoration of @FondazioneQueriniStampalia in Venice, severely damaged by the recent floods.” @efarneti See more via link in bio. Full credits: #LindseyWixson @thesocietynyc Editor in chief @efarneti Creative director @ferdinandoverderi Fashion @franragazzi @robertaninapinna Casting directors @pg_dmcasting @samuel_ellis @ DM Fashion Studio #VogueValues

In his editor’s note, Farneti elaborated upon the carbon footprint that’s generally left behind by high-fashion photo shoots. “One hundred and fifty people involved. Twenty flights, ten trains. Forty machines available. Sixty international expeditions. At least ten hours of lights on continuously, partly powered by gasoline generators. Food waste from catering. Plastic to wrap clothes. Power to recharge phones, cameras…” he wrote. “Making a fashion magazine has a significant environmental impact.” To his credit, this action is certainly novel within the fashion industry. Among the art world as well, there’s been much conversation of late surrounding the need to decrease the amount of air travel arts professionals take part in all over the globe, but little direct action has followed.

Furthermore, the money Vogue Italia saved on this issue will be donated to Fondazione Querini Stampalia, a museum in Venice that was damaged by the recent severe flooding. However, what’s perhaps the most interesting element of the illustrated Vogue covers is Farneti’s notion that image production is fundamentally bad for the environment. Over the years, many conversations have sprung up about the negative effects of photoshopped images of beautiful people, and how they’re designed to make consumers feel lesser-than. In 2020, we’re now also reckoning with the tangible damage inflicted by photography in addition to the psychological. 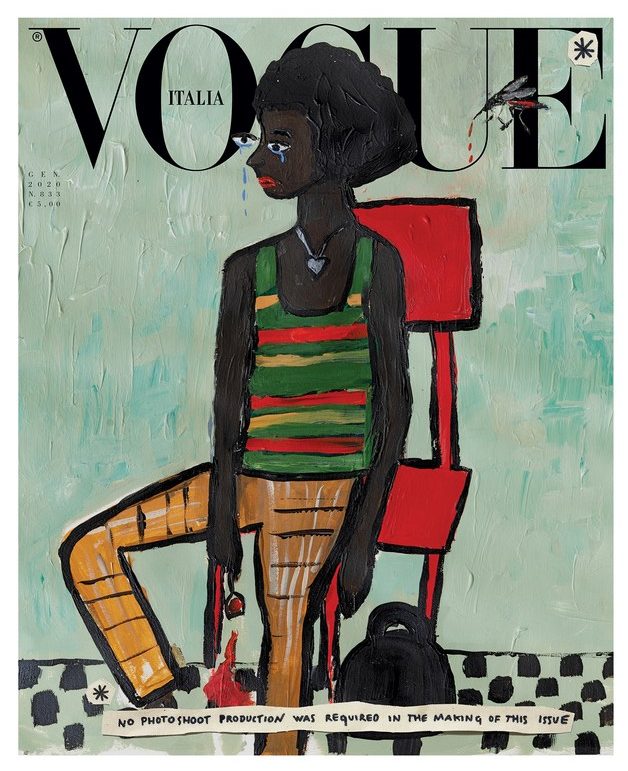