For Polish artist Krzysztof Wodiczko, public monuments signify more than glorious commemorations of war figures. For the 76-year-old who shares his time between New York, Cambridge and Warsaw, statues of political icons—most of which depict white men—are blank film screens, waiting to be activated through moving images he shoots with survivors of political or personal turmoil from across the globe. Telling the stories of people from Japan, Mexico, South Korea and many other countries, his video style could be likened to a documentary, though it’s his method of presentation that makes them something more. “The public impact and the ‘magic’ of animating the public statue has no comparison to the enclosed white screen projection in the cinema theatre,” Wodiczko tells Observer a few days before opening two New York exhibitions in distinct settings.

Madison Square Park Conservancy has offered its 139-year-old bronze statue of Admiral David Glasgow Farragut to Wodiczko as a surface on which to project his new video piece, Monument. “The ‘screen’ is as a historic, prestigious statue of the American Civil War, which caused the greatest refugee crisis of the 19th century,” Wodiczko explains, gesturing to the timeless impact of political unrest and the roles key political figures play in determining the fates of millions. The subjects Wodiczko interviewed for the film, which will be projected on the statue from Mondays to Saturdays between 5 p.m. and 8 p.m. until May 10, are refugees, displaced from their homeland after the impending risk of death due to terror attack, famine or illness.

From victims of drug cartel conflicts in Central and South America to refugees and undocumented asylum seekers from North Africa, twelve participants in the thirty-minute-film speak to the camera, and to their audience, with piercing earnestness about the day-to-day unpredictability of life during war and the challenge of providing shelter for themselves and their families. Refugee Council USA, a coalition of twenty-four U.S.-based humanitarian organizations including the International Rescue Committee and Integrated Refugee and Immigrant Services, were instrumental in determining the interviewees the artist filmed during the summer and fall of 2019 in New York.

For Wodiczko, who has shot similarly traumatized subjects for nearly ninety site-specific video projections at places like the Hirshhorn and the Whitney Museum, witnessing human agony is still an emotionally draining experience. “Time is the most precious value in human life, and it has been taken away from them,” he says, remembering a participant who hadn’t seen their child in ten years, or another one fighting to bring their children to the United States. He hopes that his film, which will catch some passersby off-guard during their walk across the park, serves as a catalyst for active discussion around a subject to which the public has become somewhat numb.

In the following week, on January 25, Chelsea gallery Galerie Lelong & Co. will expand Wodiczko’s statement on community-building and equal distribution of rights with a dramatic screening of another new film he shot with Staten Island residents holding polarized political views. As opposed to Monument, the artist’s subjects here unite under a shared geography, yet diverge in their public opinions about government politics. Called “A House Divided…,” the exhibition meditates on the widening gap between two dominant political strains in U.S., which have most evidently surfaced during the recent presidential election. The film will be projected onto two, eight-foot tall Abraham Lincoln statues, facing each other, creating an active conversation between two passive sitters, activated by moving images of disagreeing Staten Island residents.

“Historic monuments are greatly contested now—one solution is to refresh or reinvigorate the debate of what is a monument and who can be its subject,” says Brooke Kamin Rapaport, the Conservancy’s deputy director and chief curator, about the shifting image of monuments in today’s political climate and the responsibility of public arenas in re-contextualizing them. Wodiczko notes that now is time to acknowledge refugees’ personal war experiences as historical, and adds: “Their public testimonies are a powerful warning and a call to action against the continuation and perpetuation of civil wars.”

“Krzysztof Wodiczko: Monument” is open to public at Madison Square Park from January 17 to May 10.

“Krzysztof Wodiczko: A House Divided…” is open at Galerie Lelong & Co. from January 25 to March 7. 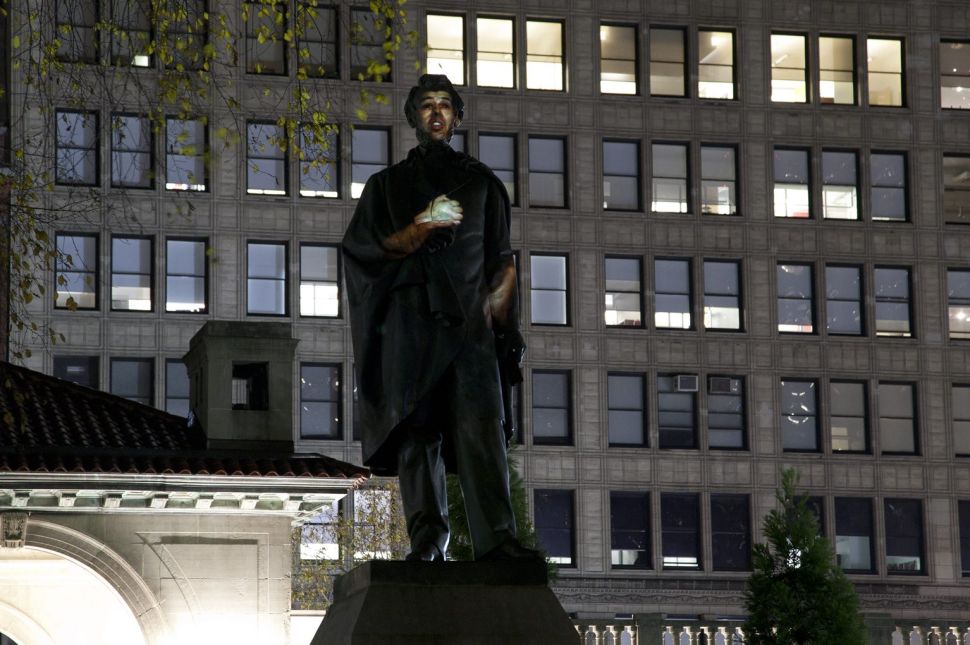