I’m sitting here beating my brains trying to say something insightful about the new Medea at BAM. Drawing a total blank. All I see is a white, deathly expanse, a voracious, colorless void. No, it’s not the computer screen; Bob Cousins’s bleached, featureless set—a brightly lit zone of bone white that would get artist James Turrell’s beard twitching—squats in the Harvey Theater like a sucking wormhole. Illuminated by Sarah Johnson and animated with Julia Frey’s video projections, this is the ivory canvas where Australian writer-director Simon Stone lays out his modernized, minimalist version of the Euripides classic. A very free adaptation of the story of a spurned wife who takes it out on her rivals and children, Stone’s script is more Dateline NBC than poetic fire captured from Periclean Athens. By framing his American bourgeois Medea with the trappings of avant-garde scenography, perhaps Stone hopes to elevate his text, but banality isn’t that easy to shake.

It’s no great feat to put the plays of ancient Greece in mom jeans. Theater makers as varied as Neil LaBute, the Five Lesbian Brothers and Luis Alfaro have attracted new eyeballs to the sorry tale of Oedipus. Alfaro also relocated Medea to el barrio with Mojada. The challenge is to find a social order and moral code—a contemporary mythology—on which to hang these grisly rituals of incest, betrayal, murder and revenge. To his credit, Stone offers a couple of neat twists and provocative modern analogs. Here, Medea is no longer a proud, dangerous sorceress with a flair for poisoning enemies, rather her name is Anna (Rose Byrne), a gifted researcher for Big Pharma who falls in love with fellow scientist, Lucas (Bobby Cannavale). We learn that, after Lucas began an affair with the boss’s daughter, Clara (Madeline Weinstein), Anna found out (sexts on hubby’s mobile) and began to slowly dose him with ricin derived from castor seeds. Lucas survived, divorced his wife, got custody of the kids, and now plans to marry Clara, with the guarded blessing of her father, Christopher (Dylan Baker). So far, so suburban. How desperate will this housewife get? Spoiler alert: It’s a tragedy.

There are two things I like about Stone’s angle, which amounts to an audience-friendly version of European regietheater familiar to anyone who has seen, say, Ivo van Hove’s West Side Story on Broadway. One is translating Medea’s magic and poison into today’s reliance on pharmaceuticals; the other is using the kids as comedy relief. If you know your myths, you know the tots are doomed. They don’t have many lines in the Euripides; they enter, they exit, they cry out for help when their rage-mad mother comes after them with blood in her eyes. But here, they’re moody tween Edgar (Jolly Swag) and his goofball younger brother, Gus (Orson Hong). They boys loiter onstage staring at their digital devices, or they pester their parents with a video documentary that Edgar’s making. The child actors are completely charming and believable, which doesn’t make their deaths any more shocking (despite the surface realism of the language and acting, nothing feels real up there) but did make me think about how Jason/Lucas and Medea/Anna’s messy separation was affecting the boys. The two little dudes are an oasis of normalcy amidst the toxic, narcissistic adults. They should be the ones who survive.

And those havoc-wreaking grown-ups are, as played here, appealing if straitjacketed by Stone’s limited vision. Byrne’s symmetrical, patrician good looks break nicely—even comically—into bug-eyed terror and neediness anytime she’s around Cannavale, who muffles his meaty masculinity in a corduroy suit and a nerdy, beta-male affect. Spouses in real life, their chemistry comes across onstage, and a scene where they tumble from an angry shouting match into a passionate post-divorce tryst is an inspired sequence. The trouble is, despite Byrne and Cannavale’s abundant charisma, there’s not enough character up there to care. She’s crazy, he’s craven, and it will end in tears. There are well-meaning supporting characters—a bookstore owner (Victor Almanzar) and a social worker (Jordan Boatman)—but Stone gives them nothing of consequence to say or do, and thus they serve as glorified scene padding, not even interesting alternatives for the excised chorus.

For all its stylishness and brevity (a brisk 80 minutes), Medea ultimately comes across as a first draft about a mentally unstable woman and her faithless, careerist husband, and the damage wrought on everyone around them. Lacking the poetry and weird, pre-Christian morality of the Greeks, or a deep dive into contemporary pathologies, the piece is stuck in the middle: a National Enquirer exclusive tarted up as a Dior Sauvage ad. Yes, mothers have killed their children. And their husbands’ mistresses. But no amount of impeccable negative space or gorgeously framed video can make these domestic horrors pop with primal, archetypal force. I’d rather see a Medea where the title character was (as in the original) haughty, remorseless, anguished, but heroic. A mother who could justify murdering her children with chilling logic, who was fighting the patriarchy while part of it. Stone’s not up to the task and frankly, he diminishes a great female role by reducing it to chicly dressed pop psychology. A meaningful Medea for now? Obviously, it’s a job for a woman. 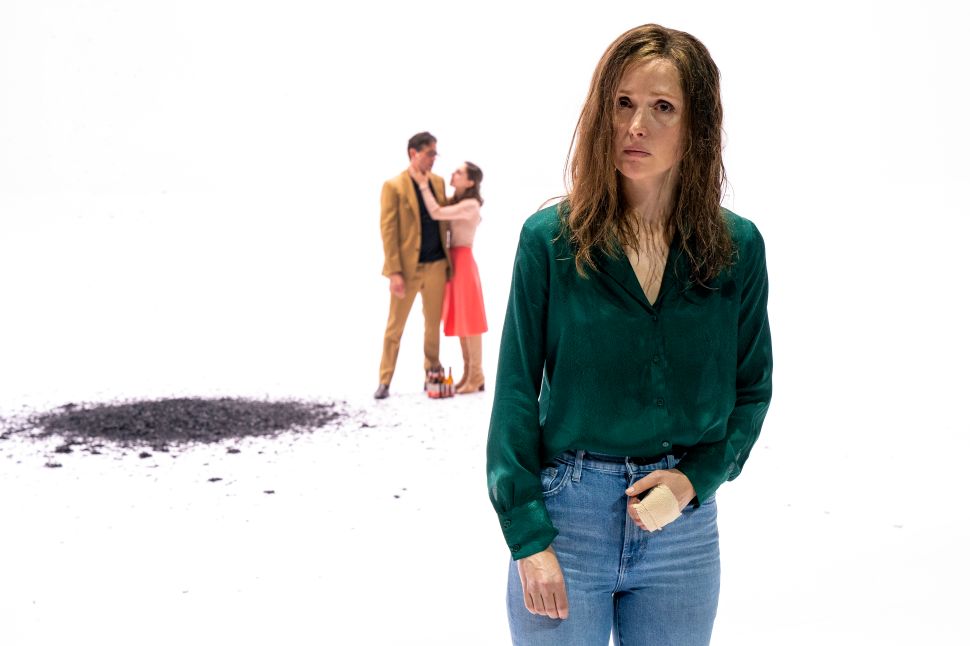