Wednesday morning, Planters, part of the Kraft Heinz Company, announced that it was retiring its 104-year-old mascot Mr. Peanut with a morbid bit of advertising ahead of its Super Bowl spot. The company killed off the character in a move about as ceremonious as the Seinfeld episode where George Costanza’s fiancée Susan died from licking the glue on their wedding invitations.

“It is with heavy hearts that we confirm that Mr. Peanut has died at 104,” the first messages announced. “In the ultimate selfless act, he sacrificed himself to save his friends when they needed him most. Please pay your respects with #RIPeanut.”

Now the campaign to “kill” this goofy legume is in a full-court social media press. More Twitter postings followed the initial tweet from an account named “The Estate of Mr. Peanut,” as well as hits on Instagram, Facebook, and more. Brands like Oscar Meyer, Chips Ahoy, and Snickers weighed in—all of them including Planters trying to capture some flavor of the virality popularized by Wendy’s snarky tweets from years ago or Oreo’s reaction to the 2013 Super Bowl’s technical difficulties. You have to wonder how much time, effort and cold hard marketing cash Planters and Kraft Heinz sank euthanizing its ancient, monocled grandpeanut. So we asked the company how it went.

“A considerable amount of blood, sweat and tears went into telling this story,” said Samantha Hess, the Planters brand manager at Kraft Heinz, in response to emailed questions about how her team dreamed up this campaign, “but the biggest challenge was preparing to say goodbye to the mascot Americans have known and loved for 104 years. We never could have imagined the love and support that has been pouring out after we shared the events causing Mr. Peanut’s death.”

All due respect to Hess and her team at Planters and Kraft Heinz, this is self-evidently marketing speak. The truth is much simpler: no one who isn’t employed to care about Mr. Peanut cares about Mr. Peanut. We crack dumb -cooler jokes and write hacky tweets about him, sure, but Mr. Peanut’s so-called demise is a waste of time: an excuse to drag your eyes away from your day job for 30 seconds before scrolling to something new. Mr. Peanut has none of the verve or raw appeal of the Kool-Aid Man dropping an “Oh yeah!” every once in a while. When I type Mr. Peanut, I have consciously remind myself not to type “Mr. Peanutbutter,” the BoJack Horseman character racked with hidden pathos. Mr. Peanut, obviously, never had any.

The most interesting thing Planters and Kraft Heinz ever did was kill him off. This is, funnily enough, more or less what happened to Susan on Seinfeld, but Seinfeld was the brainchild of Larry David, whereas Mr. Peanut has been held in trust by a company that made $26.26 billion in 2018. The company’s digital presence for Mr. Peanut, even as this campaign landed, seemed to reflect that degree of apathy. When I navigated to the company’s official web page for Mr. Peanut yesterday, I hit a “Page Not Found” error. (It was revived when I pointed this out to Kraft Heinz in my email.) At first I wondered if that was just a canny element of the stunt, but reading Hess’s response on how her company would measure success in this campaign disabused me of that theory:

“Success in our eyes is getting fans to celebrate and remember the amazing legacy of our dear mascot, Mr. Peanut,” Hess said.

The point isn’t for the company to be canny or fun, obviously, it’s a reminder to you, from a company that wants your money, that the company exists in the first place. It’s the same impulse that filled the 86 trashy minutes of The Emoji Movie, but somehow more dystopian and harder to escape, thanks to how ads follow us online and how algorithms bind our browsing experiences. The keyword “Mr. Peanut” spiked higher on Google this week than keywords for news around Harvey Weinstein’s sexual assault trial, Jeff Bezos’ phone being hacked by a Saudi Prince, and Greta Thunberg’s climate rebuke at Davos—all more important topics of discussion to be sure. Such is our reality, where just mentioning that something exists in an offhand joke—or even as a rebuke—reifies its status through algorithms that catch keywords and spit them back out. Comparing them is also silly, I acknowledge, thanks to this simple truth: no one cares about Mr. Peanut.

But it’s easier to pretend people do and keep tweeting anyway, just like it’s easier and undoubtedly drives more web traffic and ad impressions to frame stories like an alleged assault of a 13-year-old boy as perpetrated by a mascot named Gritty, instead of by the name of the performer in the costume. In the meantime, I’m sure Matt Walsh and Wesley Snipes enjoyed the paychecks they earned from Kraft Heinz for the video of his “death,” which—fueled by ad spends and the malaise of the masses—generated over 2,480 retweets and 8,630 likes within about 24 hours of its posting. And I’m sure Kraft Heinz will enjoy whatever bump it gets from its Super Bowl spot. Customers who spot a “NUTmobile” before the Super Bowl, according to Planters, are entitled to a free commemorative pin, and artists are invited to share illustrations of Mr. Peanut with the hashtag #RIPeanut, while commemorative labels will grace Planters peanuts for a short time.

But none of this erases the unadulterated truth. Mr. Peanut died as he lived—a fiction dreamed up for peanuts. 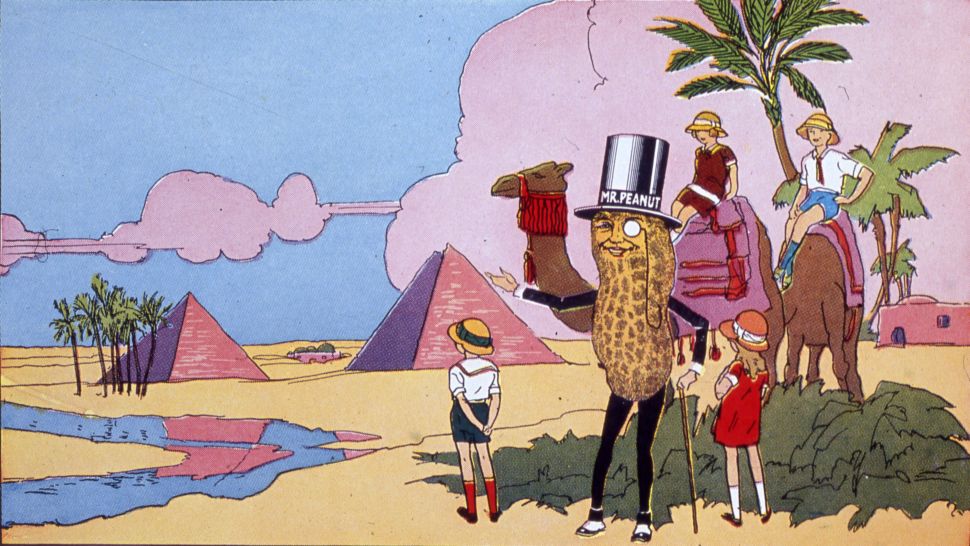