Two years ago, the incandescent actress Laura Linney made her highly praised London stage debut in My Name Is Lucy Barton, a one-act play adapted by Rona Munro from a novella by Pulitzer-winning novelist Elizabeth Strout and directed by Richard Eyre. It has now crossed the pond and opened on Broadway at the Samuel J. Friedman Theatre with all of the original creative talents intact. A repeated triumph is guaranteed.

This intermission-less 90-minute work is a one-woman show that gives the luminous Ms. Linney a chance to demonstrate in the title role her ability to conjure the underlying darkness that lurks beneath her. She doesn’t get that chance in movies very often, although in the Broadway revival of Lillian Hellman’s The Little Foxes she was memorable as the scheming Southern steel magnolia Regina, the role that catapulted Tallulah Bankhead to stardom. In My Name Is Lucy Barton, she makes an equally powerful mark as a writer from rural Illinois who was subjected to 20 years of family cruelty and indifference before she left home for New York City, married, had two daughters of her own and, without any experience or encouragement, managed to reinvent herself. The play takes place in a hospital where, after an attack of appendicitis, she spends nine weeks of complications and repercussions in a private room her health insurance does not cover. Her only visitor is the mother she hasn’t seen for many years who never stops complaining about her disgusting trip from Chicago to LaGuardia Airport, and then to the hospital by taxi. Instead of cheering up her sick, lonely daughter with maternal embraces and endearing reassurance, her mother repeatedly conjures horror stories of childhood pain and negligence about friends and neighbors as well as Lucy herself, who faces the audience to tell about being repeatedly locked in her father’s truck, once with a snake—a nightmare that left her traumatized for life. There are other reminiscences about her husband, a Holocaust survivor she later divorces, and her brother, who was banished from home after their parents suspected him of being gay, and was forced to walk the streets in women’s clothes. She even recalls her doctor, who specializes in AIDS patients that she comes to envy because at least they have a sense of community. These memories are harrowing and ugly, but Ms. Linney’s abundant, heartfelt compassion brings them to life with a touching reality that is close to unbearable.

The play is a soulful monologue. Well, two monologues, really, since the star plays both mother and daughter. As a girl raised in deprivation, forbidden the joy of books, magazines, newspapers and television, surrounded by cornfields and soybeans, not always with hot and sometimes eating dinners consisting only of bread and molasses, she talks about the minutiae of life. As the mother, she expresses the cynicism, anger, disillusionment and unhappiness of life. For visuals, lighting shifts and subtler video projections are all director Richard Eyre employs to signify action. Ms. Linney does the rest—deceptively sunny as the writer who tries to cope and her cold, bloodless and self-absorbed mother who slams the door on every attempt at redemption—with only slight changes of posture and vocal tone to delineate one from the other. She has authority, beauty, strength, versatility and for a change you can understand every single word she says. An actress of contrasts and guile, she’s something of a marvel—not to mention boundless appeal. 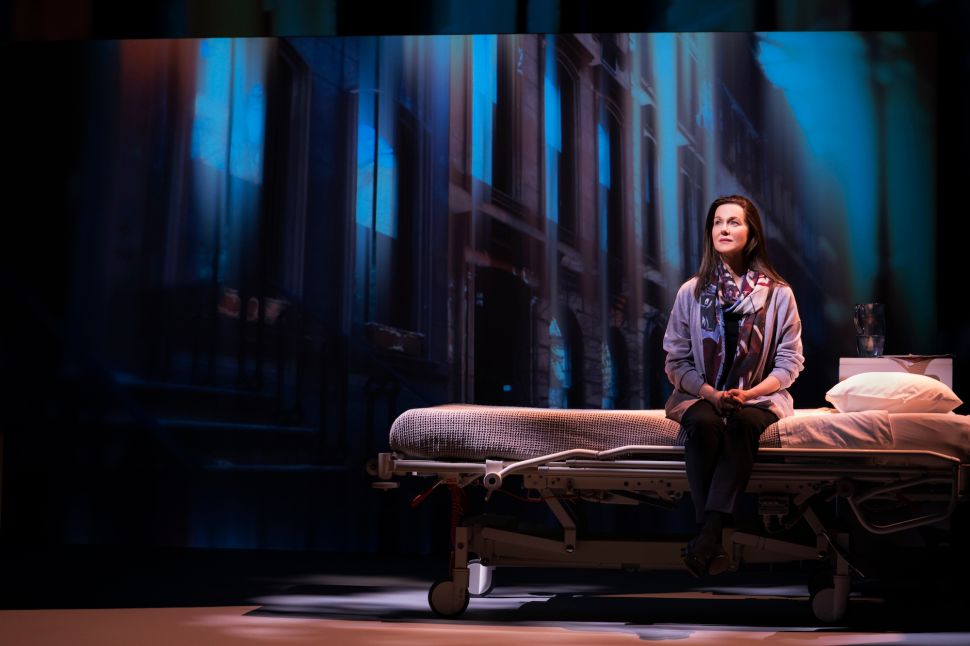