On Monday, the British Museum announced that the institution had successfully raised the £440,000 ($577,300) necessary to retain the miniature painting The Trumpeters by Nainsukh of Guler, an artwork that’s purportedly integral to fully comprehending the history of northern Indian art. In 2018, when the artwork was already in the country, the UK government had to move to block the painting’s export license so that it couldn’t be sold overseas to interested buyers. The British Museum, which has recently faced a barrage of scrutiny from commentators who take issues with their ongoing funding from British Petroleum, also has a great deal of south-east Indian art on display.

The painting in question depicts a series of expressive musicians puffing exuberantly on Pahari horns, and the artist himself is considered to be one of the most important figures in Indian art history because of the masterful artworks he made for the enjoyment of wealthy patrons in the 18th century.

“Nainsukh is certainly the most recognized name in Indian miniature painting and has had numerous books written about him,” Sanjay Kapoor, a dealer with New York City’s Kapoor Galleries, specializing in art from India and the Himalayas, told Observer. “Nainsukh was a court artist for most of his life and went through the patronage of several Rajas. With each one his style changed, which had a massive impact on the style of the region as well.”

The particularly compressed nature of Nainsukh’s work is also part of a larger tradition of miniaturist Indian art. “Miniature paintings were made as objects of enjoyment, to be passed around after dinner, or while smoking and having a get-together,” Kapoor continued. “The subject matter of miniature paintings are generally the great epics of Hinduism. Each artist, although recreating the same story, made the narrative entirely his own in the way he rendered illustrations.”

The work was originally bought by the painter Winifred Nicholson during her tour of the region and brought back to the U.K. in the 1920s. Her family owned the work, until they decided to see if it would attract interest from buyers and applied for an export license in 2018. The Department for Digital, Culture, Media and Sport shut that idea down.

The Art Fund, the National Heritage Memorial Fund (NHMF) and the Brooke Sewell Permanent Fund provided financial support for the British Museum to purchase the work.

As of this week, The Trumpeters is reportedly now on display in the British Museum’s Sir Joseph Hotung gallery of China and South Asia, where it can be visited and admired by all. 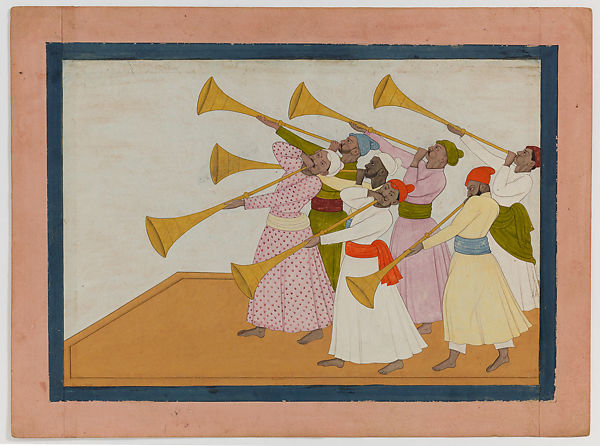